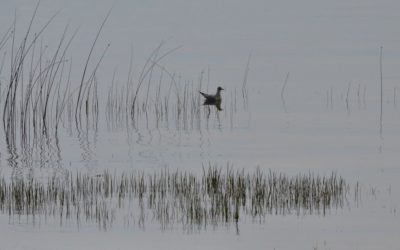 Arrival and first walk in town.

It was a long and uncomfortable night but in the end I’m in Yekaterinburg and I should say something more: I’m in Asia since few kilometres before the town it passes the border with Europe.

Railway station is not too far from my guest house so, even if there would be the possibility of using the metro, I prefer to walk. Likely a consequence of the many hours spent sitting in the train. In about half an hour I get there and I have to say that I like the place, rational and modern but still with charme.

Unfortunately my room will be ready in one hour and I don’t want to wait there so I prefer to leave the luggage and get out to see how it looks my first town in Northern Asia and fourth largest town in Russia. I’m very close to the city pond so I head in that direction for hopefully some nice view of the town by the water. It is quite a cloudy day but is Sunday so there is the same a lot of people around. I can’t say that with Yekaterinburg is love at first sight. The only remarkable landmark seems to be the church upon the Blood built on the site where Tsar Nicholas II Romanov and his family where killed in 1918.

Another one could be probably the green and red painted Kharitonov mansion, in Lenina street. It is not possible to visit it due to the fact that it is used only for special events and, as far as I heard, also to host Russian President in the unlikely case he comes here.

I walk with the agility of a zombie and one hour is already passed so my room should be ready but on the way back I pass through a little park where there is a rehearsing orchestra. I never had the chance to see live such kind of situation so I sit on a bench and I enjoy the unusual show. The orchestra plays quite well and the atmosphere is relaxed nevertheless the Director intervenes often stopping the music in order to provide suggestions to the musicians. When they finish the zombie moves slowly to the Guest House and thanks to its supernatural powers obtains the key of the camera.

Long recover and evening out.

As soon as I touch the bed I fall deeply asleep and I keep doing it for at least three hours. When I wake me up is already dinner time according local time. Since I didn’t have lunch I decide to adequate my tummy to the new time and I go to a Georgian restaurant with a lot of good reviews on TripAdvisor. I should add one more because the place is elegant but what is more important has very good food. I took a small Adjara Kachapuri and Chanaki, a beef stew similar to the Azeri Piti but less fat. Walking back to the hotel I can appreciate the large avenues and the parks but still nothing that thrills me. Maybe I didn’t plan properly my first day or I was too tired. But tomorrow is going to be the Russia Day so I’m sure the town will be at its best. Would be that enough?

Today is the Day of Russia. I woke me up with the sound of Russian Anthem played somewhere in the distance. Since I entered in this country I see ubiquitous billboards on the streets reminding this date and I expect then great celebrations.

I’ve been in Moscow for the town’s birthday and it was absolutely great. I suggest anyone to go there during that event that falls in September. However, now we are in June and I am in Yekaterinburg, let’s go then to see what it happens here. I’ve tried to find out a program on local websites including the one of local administration.

By the way did you know that Boris Yeltsin, the “white crow”, the first democratically elected president of Russia was born here? Well, yes and because of that here there are of course many institutions named after him. Due to lack of official information about program, I decided to start my research of the event from the pedestrian area of Yekaterinburg, Vaynera street. Could we call it the Yekaterinburg’s Arbat? Well someone here does it. Before I go to railway station ‘cos I want to be fully sure about train scheduling. In the evening I have to go to Tobolsk and train leaves at 7:00 PM.

Reassured, I can now take the metro and go to Vaynera street. When I arrive to station “1905 goda” I see it is raining a lot. People remain inside the station. I decide instead to get a coffee somewhere and wait there for the end of the shower. It is enough.

After coffee rain stopped. I can finally walk on Vaynera that features a lot of peculiar statues including one of Michael Jackson. In the street there is a small “Big Band” playing, you can listen to them at the end of this chapter playing “La Cucaracha”. But are they’re here because of Russia day or not? Honestly I’ve no idea but they don’t seem officially related to the celebrations.

One event surely related to Russia Day should be held in a mall near Oktyabrskaya square. I read something about an international contest for Miss braid.

How can I miss it! Approaching the square I hear once again the Russian Anthem. I follow it and I’ve finally arrive in what it looks to be heart of the celebrations. No traces of miss braid contest but instead a very funny band is playing. It is an orchestra of the army mixing a great skills in playing instruments with a theatrical attitude perfectly led by their director. I was pretty far but I hope you can understand something with the special arrangement of the Volga Boat Song you can listen at the end of the chapter. This is really a nice show. I couldn’t say same about next one, made of Russian traditional songs played in a Pop arrangement. I listen to it for four or five songs then I go away. Really too kitsch for me.


Local support and one more train.

While I’m moving toward Lenin Street walking by the pound I’m stopped by a person asking me if I’m a journalist. It actually happens often and the reason seems to be the hood that gives to my camera and as consequence to me a professional “look”.

We start to talk and it comes out that he works as photographer for the Russian Railways and he is waiting for a dutch TV troupe turning a documentary about the trans-siberian railway. They will arrive in the evening so since we both have times to spend we walk in town in the direction of the local headquarter of RZD that by the way is also close to my guest house.

Since this person is from a village near Yekaterinburg it shows me in a better way some sight I’ve saw yesterday and he gives me plenty of information about the town and Russian railways, the latter being maybe a more interesting topic to me. He shows me few old wooden houses a bit out of the beaten path and a sign on which there are distance from Moscow and Saint Petersburg represented not in kilometres but using the old local unit of measure for length called verst. So, now I know we are 1.766 versts from Moscow and 2.234 from Peter but much less from my guest house where me and photographer split following our different goals. I can go to take my luggage and then go to the railway station. I have still time so I stop to eat some pelmeni in a small a simple pelmennaya.

Are pelmeni a local dish typical of Ural region or Siberia? In Yekaterinburg they say that of course they are from Urals. I don’t know but for sure they are good. Sated I reach the train while a heavy rainfall starts. This time I’m again in the first class compartment and furthermore I’m alone.

Tobolsk is not on the main line of Trans-Siberian railway and this is probably the reason. Actually it seems I’m the only one in the entire coach. After I arrange my stuff the conductor tells me that I’ve also dinner included in the ticket so I got an extra dish made of fish with potato. Not bad. No alcohol is allowed here so after eating I go to the restaurant to drink a beer enjoying the hard rain falling behind the window. Train will arrive in Tobolsk tomorrow morning at 08:15 local time. Quite a perfect time to enjoy a full day in town if only the weather will be better than here and now. You can instead enjoy the gallery of my two days in Ekaterinburg. 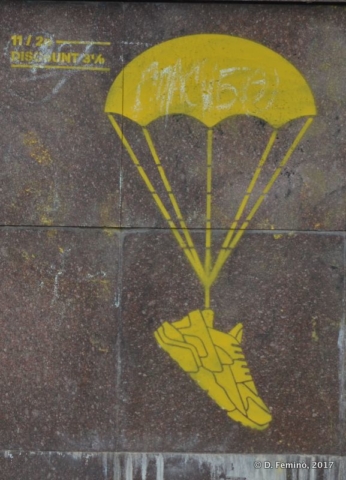 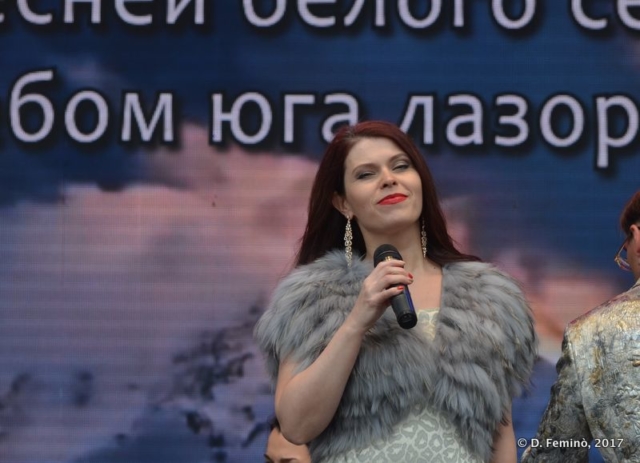 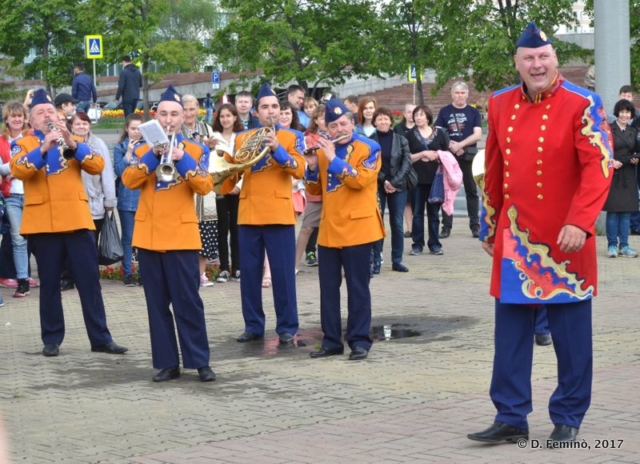 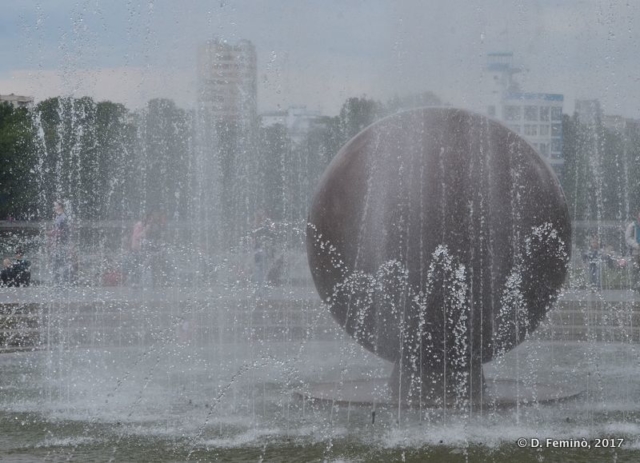 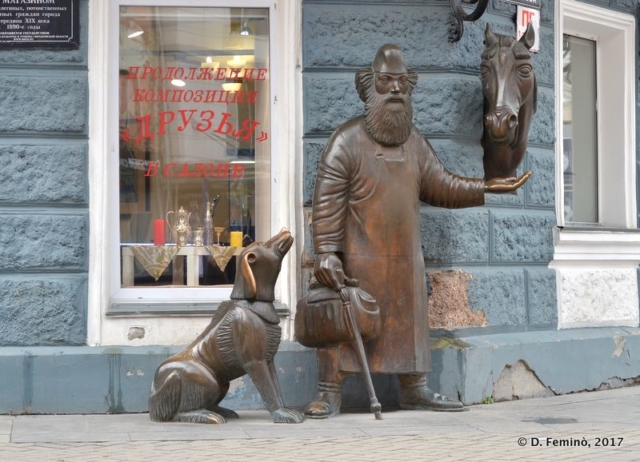 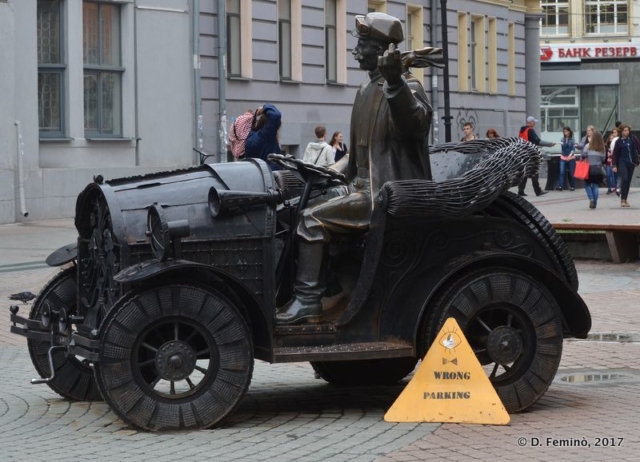 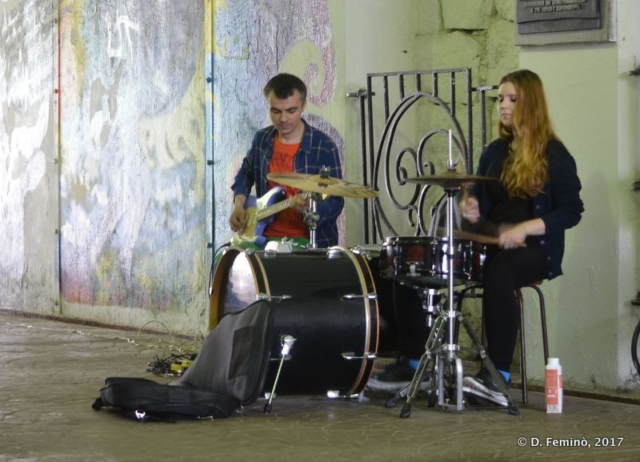 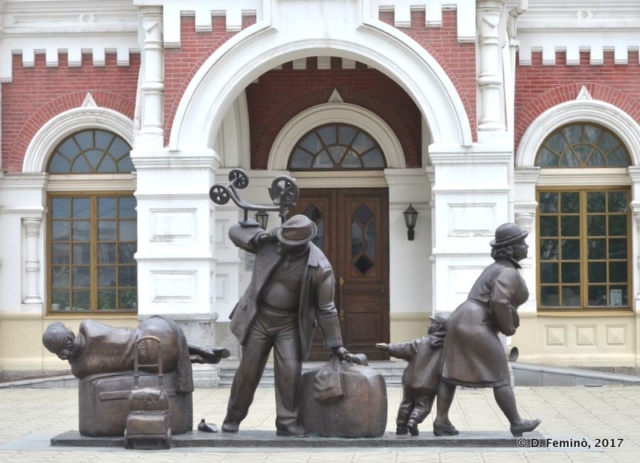 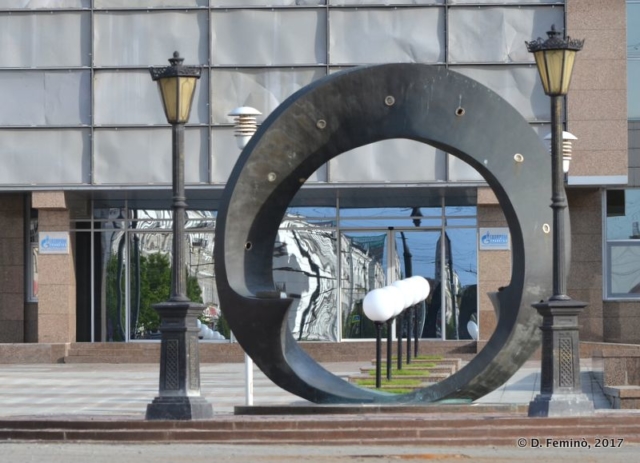 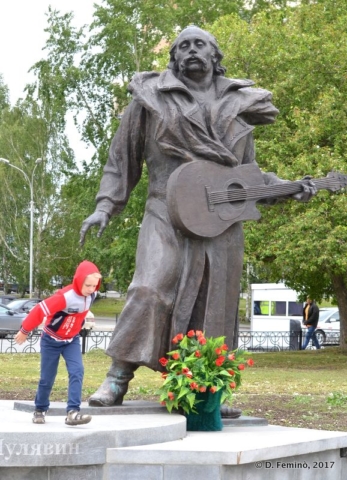 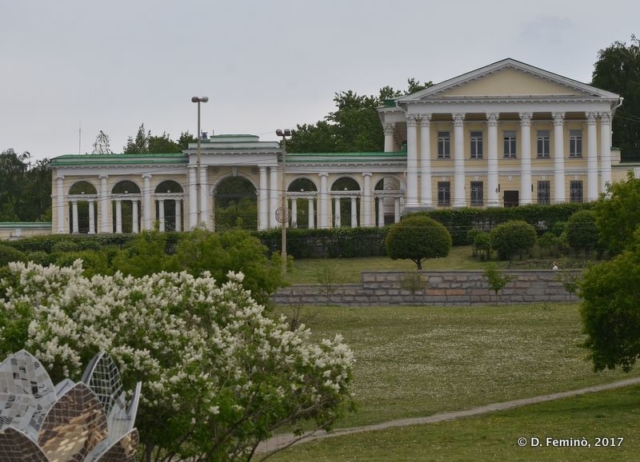 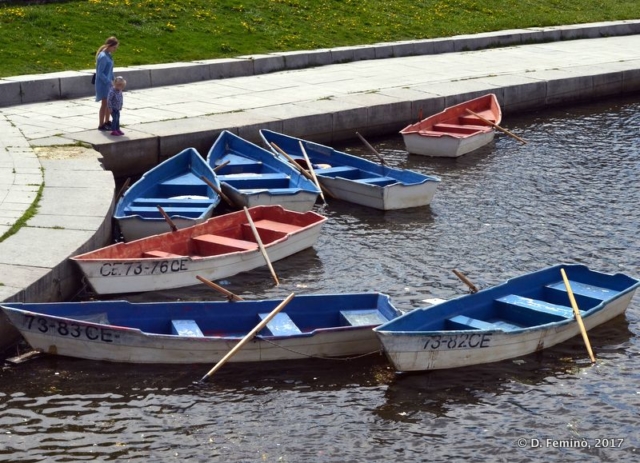 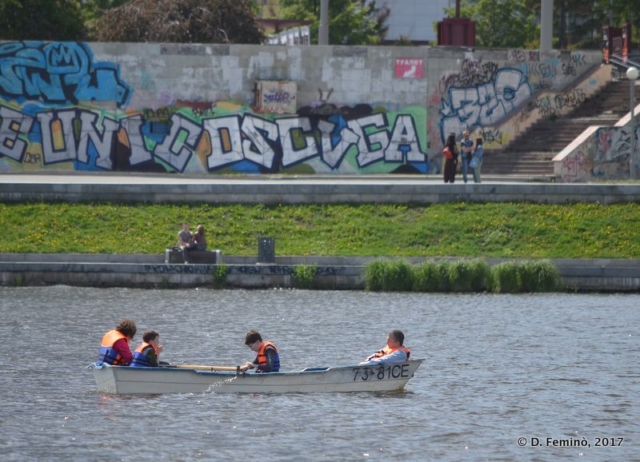 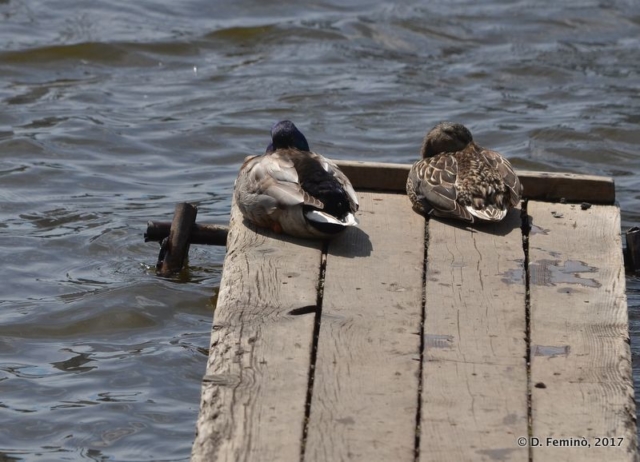 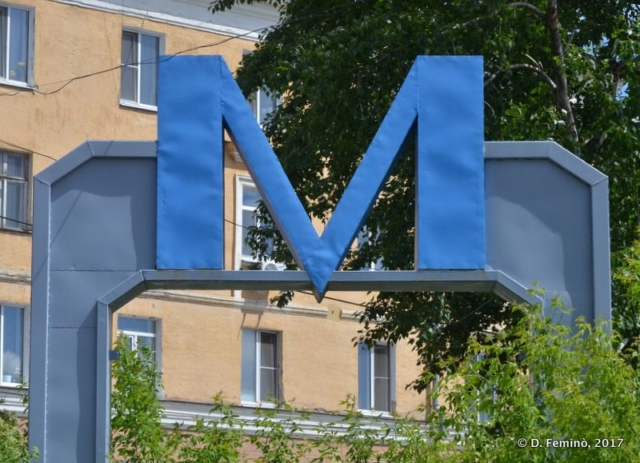