From Xi’An to Shanghai

Shanghai, its name is enough to evoke the spirit of China maybe even more than its capital Beijing or at least this is happening to me. 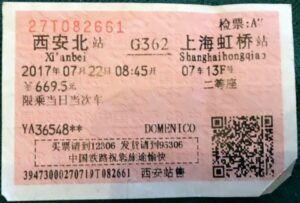 It is also the place where are mostly taking place the stories of inspector Chen written by the Chinese writer Qiu Xiaolong. For these reasons I’m really eager to reach Shanghai but before I’ve to deal with a long trip. I’m ready to take the bullet train perfectly on time, arriving at Xi’An north station 20 minutes before the train leaves. The way to Shanghai is quite long, about 1.500 kilometres crossing four provinces, this is a distance that in many other countries would require a flight or a very long trip but not in China, at least not where a fast train is available.

This one (train G362) covers this huge distance in less than six hours. Really impressive. It means an average speed of 250 km/h including three intermediate stops. I’m comfortably sitting at my place and I’m watching the landscape out of my window. What I see is something that became familiar to me and that I think it is one of the peculiarity of modern China: this mix of giant modern infrastructure like bridges and bucolic scenery, with hills, cultivated fields including, of course, paddy fields. 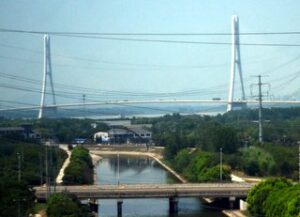 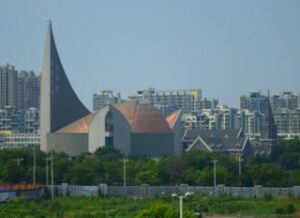 In the end the building that attracts me more is a church with a very modern architecture. I guess it is somewhere close to Shanghai but at this speed, the word close has a different meaning. It is in Suzhou, Waxi, Changzhou or somewhere else? I let my readers to find the answer. And finally, perfectly on time, the train reach the Shanghai Hongqiao railway station. Now it starts the difficult part…

As usual, it is not so easy to reach my place once I arrive in a new town. Using public transports as much as I can is part of my travelling philosophy but this has some disadvantage. Once out of the train I have to understand where is the metro station and where to buy tickets. 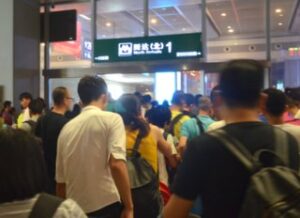 This station is incredibly crowded and there are huge queues at ticket vending machines. 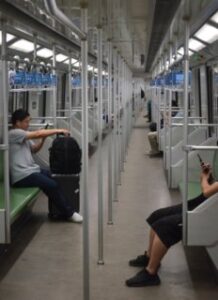 Furthermore, as far as I know, my hotel is not very close to metro so, very likely I will have to take some bus and, believe me, my luggage is huge. With my ticket finally in the hands I can catch line two of the metro and head to Jing’an Temple station. A promising name, isn’t? Once there I will have to follow Nanjing Road for about one kilometre and, if I will be good, I will find my hotel. The metro is quite peaceful. 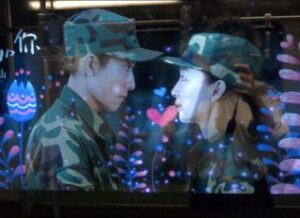 Not too many people. It is surely not peak hours but it should also considered that the same line serves the airport, the relevant stop is right after the railway station. On my trip I have the chance to see, as in Beijing, advertisements displayed on tunnel walls. I have the feeling that these ones are more sophisticated than those ones in Beijing but you can judge by yourself taking a look at the video at the end of this chapter. Once at the destination of my metro trip, I take a bus but I realise that, in theory, my hotel is very close so I get out after two stops. Just in time to see that there is a craft beer festival near by and the to spend almost half an hour to find my place. The guilty one is me but also the issue with Google Maps I’ve already reported in my post on arriving in Xi’An. However, in the end I find the place and I can say that the hotel is nice. When I arrive here is a bit late to plan anything than the dinner but the Craft Beer Festival, if they serve food, can be a good option, but before that, as I promised, take a look at Ads in the metro. Story follows right afterward.