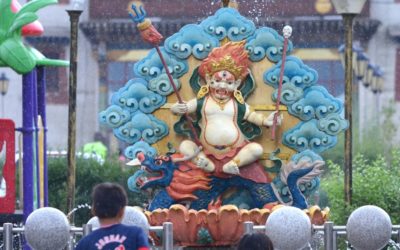 A precocious farewell (or maybe a goodbye).

Today I’m leaving Mongolia. It would be more correct to say that I’m leaving Ulaanbaatar since I spent most of my time in Mongolia’s capital. When I included Mongolia in my trip I’d planned to spend here two or three weeks but things ended up in a different way. People that accomplished the trip around the world say that there is a moment during the trip when you feel suddenly tired and maybe even a bit depressed.

Once you overcome it then you are able to travel indefinitely. Maybe my visit to Mongolia fell right in that moment and in this case it will be in charge to China to carry me into the next phase. I had bad feeling arriving here in the chaotic Dragon Bus Terminal, dealing with the bastard taxi driver and facing a hotel under the expectations. I managed similar situation in the past in other trips without a huge effort so really here it was the effect of a peculiar mood. Consequence was that I didn’t arrange a proper tour of the country. What I saw in my excursion to the Terelj National Park, increases my regrets that’s why now this is not maybe a farewell. Goodbye Mongolia then, goodbye land of ‘not so eternal’ blue sky. But now, let’s go to Beijing!!!

Still some hour in Mongolia.

My Air China flight to Beijing leaves in the early afternoon so, I take my time in the morning. When I’m ready I ask for a taxi to the reception being too lazy to reach Chinggis Khan square where there should be a regular bus to the airport. Receptionist is quite surprised by my request. She looks at me like asking: a taxi? really? and why you want to do that? She need to check with people around in order to find taxi’s phone number.

I perceive a sort of satisfaction on her face following the negative outcome of her subsequent call. It is her moment now. She takes control of the situation and sends a young lady to catch a car for me in the street. As I explained in one of my previous posts here this is a usual habit. And actually, in two minutes the girl gets a car and agrees the fee.

What is astonishing to me is that the guy was driving the car in the direction opposite to the airport. I don’t understand if there are people driving around the town waiting to be stopped by someone doing then this as full-time job or if the chance of earning some extra money is enough to make them change their plans. However I’m now in a car heading to the Ulaanbaatar international airport, of course named after Chinggis Khan. It takes about 30 minutes to get there. Once there I can’t leave immediately my luggage because in this airport check-in counters are in a restricted area where it passengers are allowed to enter only when relevant flight check-in is open. I decide to spend some time in a very small and simple café at the airport. There are two Italians at the table next to me. They come from Bologna and they are here for some business. If I understood well they sell doors. They leave before me coming back their country that is also mine but I’m going elsewhere. My flight is one hour late. Boring, since there isn’t much to do in the area after security control.

I’m sitting in a window seat as I always do if I can when duration of flight doesn’t exceed 4-5 hours. This morning there was a clear blue sky in Ulaanbaatar that made me look forward great views over the Gobi desert and the Great Wall but unfortunately didn’t last enough.

Clouds and turbulences are delighting passengers, including me, just 20 minutes after the take-off. Plane shakes often and between us and the land down there, it is a thick layer of clouds.

My priorities quickly changed. Now I don’t care too much about seeing great wall of China from the windowpane. For me it would be more than enough being able to see it in next days after have been safely landed in China’s capital. In the end, only view I had was some small glimpse of the yellow Gobi desert surrounded by clouds. You can see what I saw in the picture in this page. I look for comfort in wine and food that is not so Chinese as I could expect. I will have time to experience this food during next weeks. When we land in Beijing it is raining but this doesn’t represent an issue for Air China Boeing 737 (not the one of the cover). I’m in China, the most populate country and the fourth world largest country and I left the first one just few days ago.

A first glimpse of China.

I have to admit that I’m quite concerned about my stay in China. Will I be able to overcome problems due to language and cultural barriers? With same attitude I had in Mongolia this will be a problem. Here everything could be even more complicate. Maybe in Beijing things can be different but what about other ‘small’ towns (with only few millions inhabitants)? How hard will be travelling around such a huge country and its hugely populated towns?

An airport is a classical example of the Marc Augé non-places so it should may not give any hint on what will really happen outside here but I’ve to say first impression is very positive. Checks at the border control are very straightforward and once in the inner airport area, directions are very well signposted in English and in Pinyin, the romanized version of the Chinese. From Beijing Capital International Airport, town is easily reachable by metro and ticket can be bought at the multi-language vending machines. I did plan the route to my hotel carefully and so I’m able to reach the closest metro station without any problem. Ok, it is still raining but it is also hot and the hotel is not far and once I reach it I find out it is lovely and the entire district is also very nice. I have to say I’m happy because, as I saw in Mongolia, a good start is very important and this was very just perfect so far.

A walk in a hutong, first real Chinese food & a bad “surprise”.

My hotel is located few kilometres north of the Forbidden City in a hutong. A hutong is a kind of small street connecting houses with inner court. Quite often there are entire district made of hutongs. By the way the term “Hutong” seems to come from Mongolian “hottog” meaning well, a small inheritance of the Gengis Khan domination. The entire district is a pedestrian area with policemen standing at all entrances. In the area there is a plentitude of public toilets and I really don’t know why. After a quick shower I’m out to experience for my first time the “real” Chinese food. In my hometown, Milan, there are hundreds of Chinese restaurants but as it was confirmed to me also by Chinese people visiting Italy they soften the tastes in order to make it more pleasant to Western taste. I don’t have any clue yet to orientate among the many restaurants so I enter in the first one I see. Menu (in English) lists a lot of options. This is a point in common to the Chinese restaurants in Italy.

I personally prefer restaurants with a small list of available dishes but it seems that in Chinese restaurants things are different. I do not “dare” too much in my choice this evening and so I take some chicken with soy sprouts and other vegetables as a side dish. Quite good but portions are maybe a bit too small, or it’s me made too hungry by the long trip. After dinner I walk further along these small streets with great pleasure enjoying the calm atmosphere. My good feeling has a quite strong stop once, back to the hotel, I try to use internet. Facebook, Google (Search, Mail, Maps), Instagram and Twitter are unreachable. Worst than in Iran. I knew about the so-called “Great Firewall of China”, why I didn’t do anything in advance? Blame on me! However in the end, I didn’t take too much to fix the issue. Apple store luckily is not blocked and it features some VPN software allowing me to reconnect to the world. It was an intense day. I need to finally rest. I have Beijing to explore starting from tomorrow.