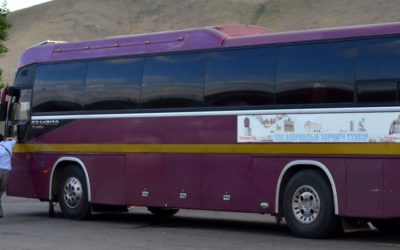 After several days spent in Ulaanbaatar, I started to feel a bit as imprisoned and I decided that an excursion to anywhere became mandatory. Maybe because of my unexpected negative approach the only way I’ve found in order to achieve this goal was through the central tourist office. They proposed me a couple of day-trip excursions and among them I thought the most interesting would have been the one to the Gorkhi-Terelj National Park because more varied. Closest park’s gate is located about 60 kilometres east of Ulaanbaatar. It is going to be an almost full day private excursion that means that someone will come to pick me up at my hotel next morning at 08:00 AM.

Finally it is time to see this country, the so-called land of eternal blue sky, from a different perspective.

Then, eager to start my excursion I’m in the hotel’s hall 10 minutes in advance but also my guide is there waiting for me. Great! The team is made of me, the driver, a 40 year-old man, and the guide, a girl studying at university that, differently from the driver, speaks a good english.

Getting out of Ulaanbaatar it takes some time because of traffic. I see also a train. Where does it go? Could I have used it? No time to think about it because, once out of town, the landscape becomes great: really blue sky and green hills spotted by cattle. This kind of private excursion is quite unusual for me so in the beginning I don’t ask many questions and I just watch out of my open window taking pictures whenever an interesting spot comes to my eyes.

After a break to buy some water at a road restaurant, first stop is to see the impressive steel statue of Gengis Khan.

It has been built only about 10 years ago but it became soon one of the landmark of this Country. I really hope that my small picture on the right side gives you an idea of how huge is. In one of my previous post I complained about the size of the statue in Chinggis Khan square in Ulaanbaatar but here they really made it big. Statue is 40 meters tall but its size is further emphasised by the fact that it is in the middle of nowhere.

Monument can be seen by several kilometre distance. Its location was chosen because this is allegedly the place where Gengis Khan found his golden whip and a copy of it can be found in the museum that is hosted in the statue’s basement. It is absolutely great to climb up to the top of the monument and once there be face to face with the great conqueror founder of Mongol empire. View from the top also allows to see the life-size soldier’s statues set in the formation used to honour the khan. The overall visit takes about an hour and I think is a must for everyone coming in this part of the globe. Now let’s move on.

The statue complex is not yet within National Park’s area even if very close. In order to see next attraction we need to enter the park.

There is just a simple gate with apparently no fee to be paid. Along the road I have the chance to see some stele full of colourful ribbons exactly like those ones I’ve seen in Buryatia and some small stupa, sometime white, sometime golden. We cross few very small villages mixing concrete houses and yurts and mostly with no paved roads. I keep liking the landscape I see from my window but when I’m really struck is in the moment I see yaks for first time in my life.

Sometimes there are stockmen on horse taking care of them, more often the animals are on their own. I ask to stop the car to get closer to them walking in the fields. They do not look particularly shy so I can take some pic. Few kilometres from the yaks’ place there is turtle rock, one of the most important sight of the park.

Turtle is a very respected animal in Mongolia and more in general in Buddhist world due to its longevity that in some way should be a proof of wisdom. Furthermore, ability of this animal to withdraw into its ‘house’ is considered a metaphor for aptitude to meditation. In many case a turtle-shaped stone is a basement for columns in temples. This naturally shaped rock really looks like a big turtle especially if seen from certain angles. The area is very touristic, in the way it could be in Mongolia. Dozens of people are doing selfies with the turtle rock in the background and there’s even some camel for who wants to take an even more ‘adventurous’ picture.

The Aryaval monastery or Aryaval meditation centre, as here is more often referred to, is not far from the turtle. Distance could also be covered with a 40 minutes walk.

Differently from other monasteries in Ulaan Baator it hosts just a single temple that, because of its long frontal stair, reminds of an elephant if seen from a distance. This is not an historical place since the complex was built only in 2006, nevertheless is a very nice sight standing spectacularly on the mountain side.

The long path to the temple is spotted by many panels with different sentences identified by a specific number. At the beginning of the walk there is wheel, very similar to the “wheel of fortune”, in order to pick up a number and so the relevant panel with a message. A procedure that reminds me in some way I-Ching also

because the sentences on the panel are not very clear. Before entering the temple, there is a small bridge with the sign “the bridge that leads beyond wisdom“. Inside there are many statues of deities and around the building the usual mani wheels that I have described previously. The morning was quite full and after visit to the monastery I start to be hungry however, before addressing this very important topic, I still have the chance to see a ground squirrel. I’ve seen already many of them while in the bus from Ulan Ude to Ulaanbaatar but finally, now I had the chance to catch one, with the camera, of course.

Cooking with stones in the pot.

Lunch is held in an real yurt or ger, as they call it in Mongolia. It is one ger of a small nomad family settlement.

Hosts are really nice even if they don’t speak english and food is great and more than enough to calm down my hunger. Lunch starts with a set of dairy products served with a deep fried dough. Everything is quite fat but really tasty. One of the appetizers is called aarul and is very similar to a dried cheese ball I ate in Kazakhstan where instead is known as qurt.

After this strong starter the lunch proceeds with a very typical Mongolian dish: the Khorkhog. It is a lamb meat stew cooked in a pot containing also stones. These stones, during the lunch should be taken in the hands in order to transfer the heat to the body with allegedly great benefits for health. The visit to the nomads is going to be completed by a short horse ride good mainly to postpone my post-lunch sleepiness that caught me when I’m back in the car and therefore even if sometime I have the impression to see still more yaks around me with I sleep deeply until we reach Ulaanbaatar and my hotel in the afternoon. It was a great day that allowed me to see a bit more of the country. And to allow you to do the same, here’s the usual picture gallery. 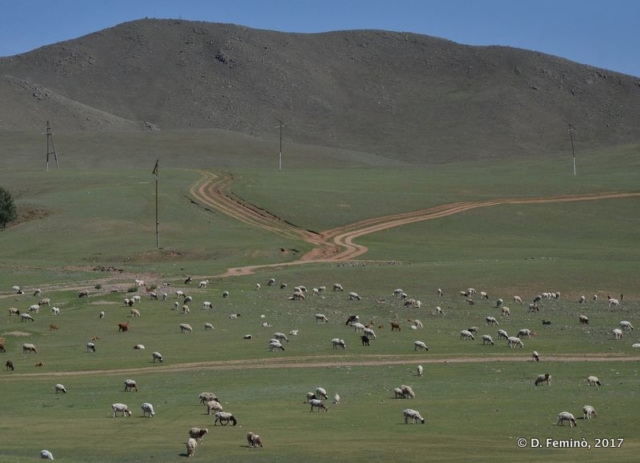 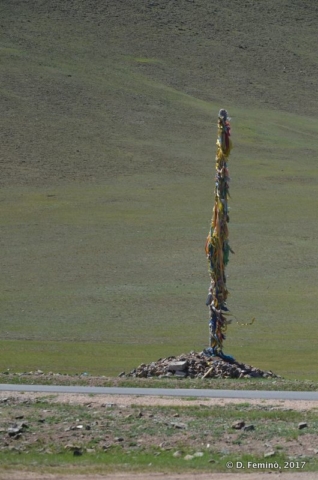 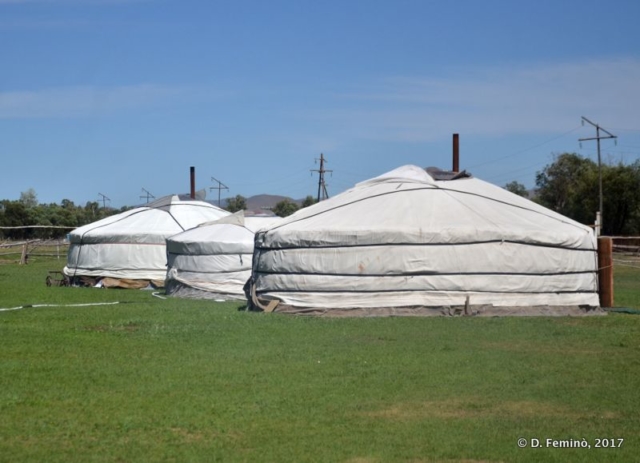 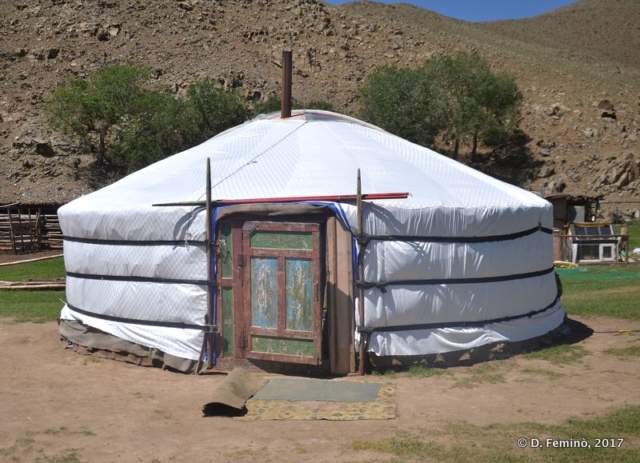 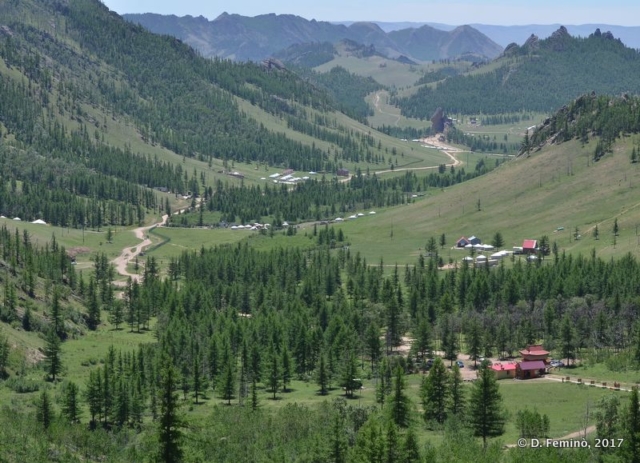 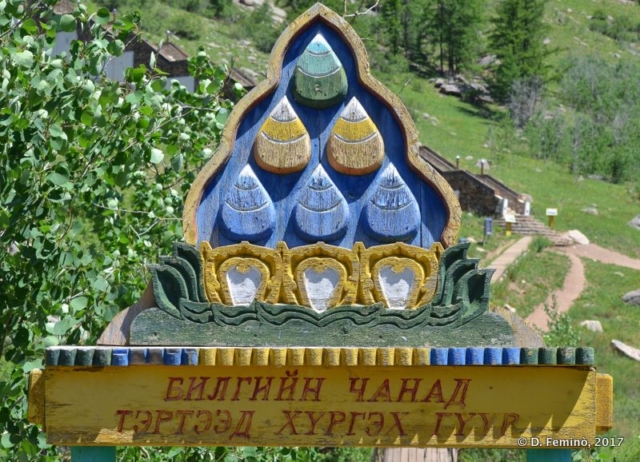 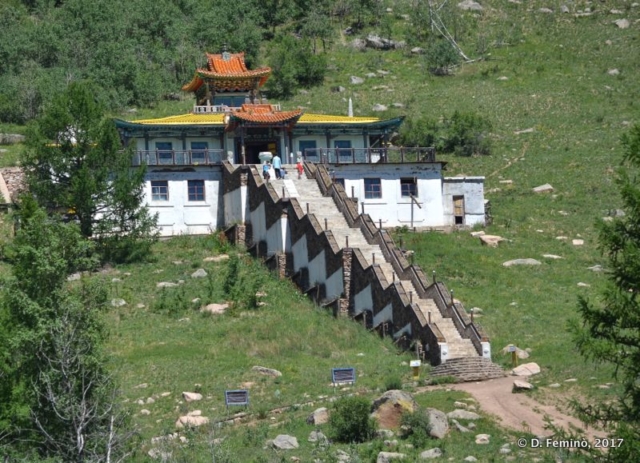 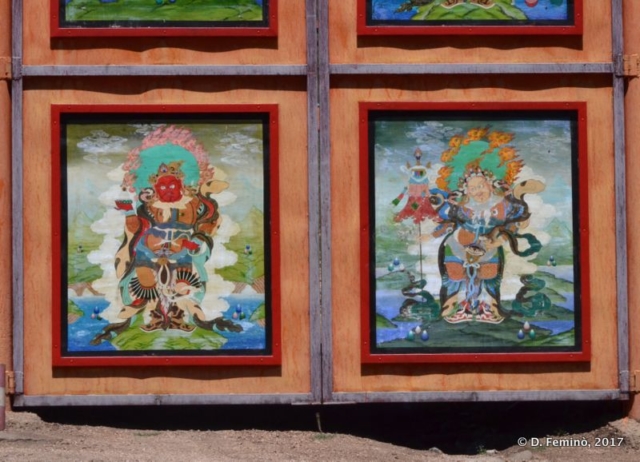 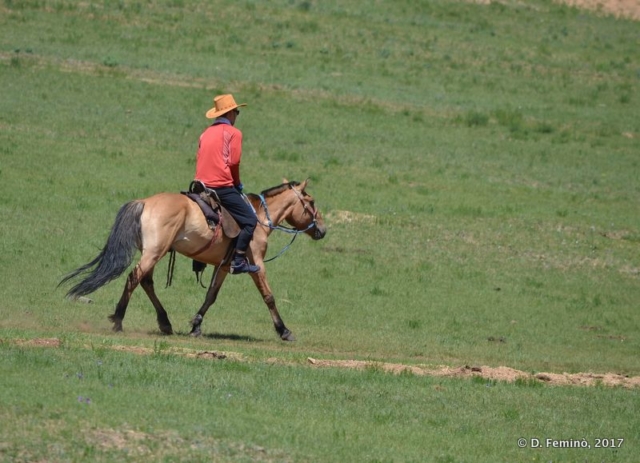 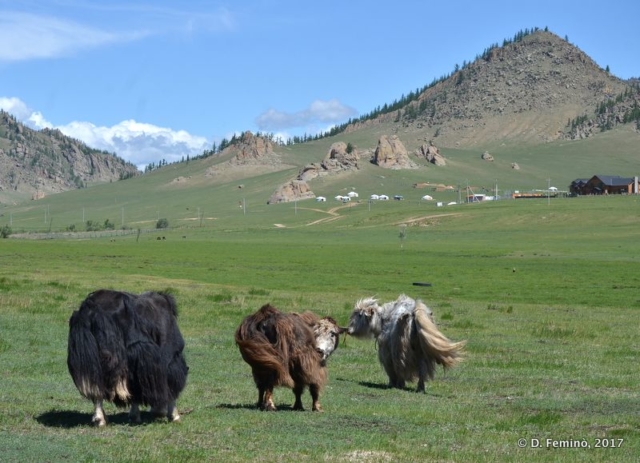 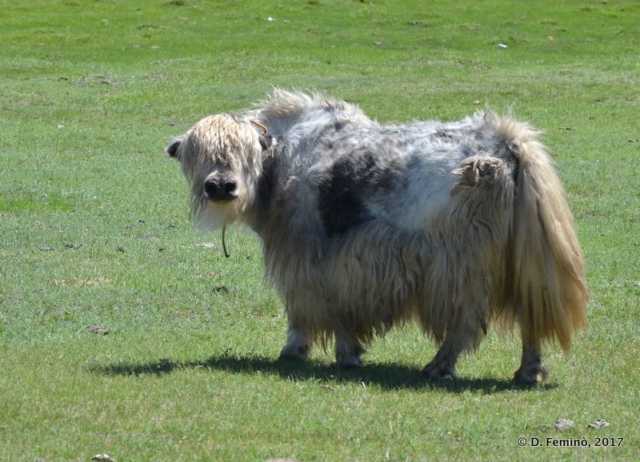 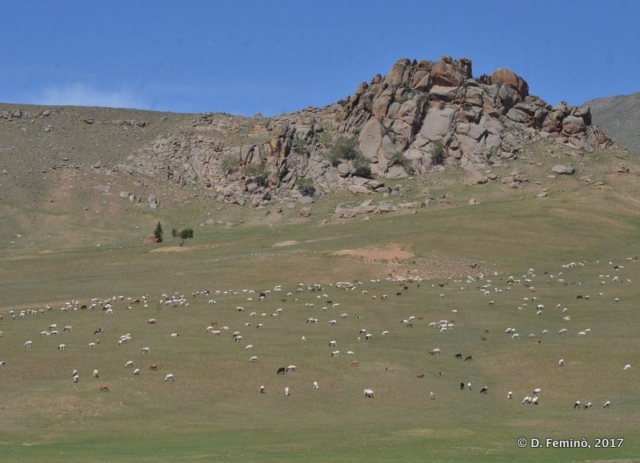 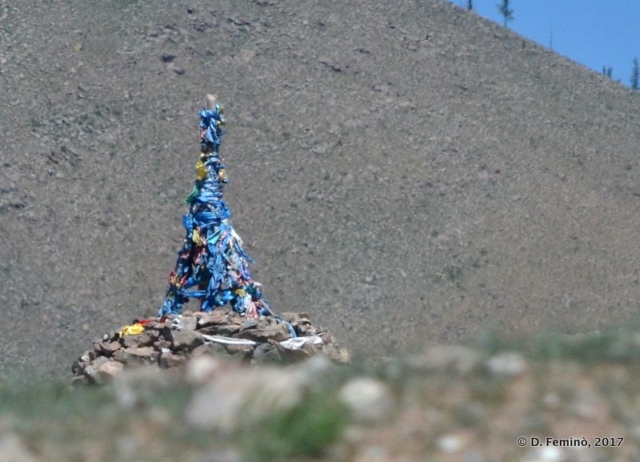 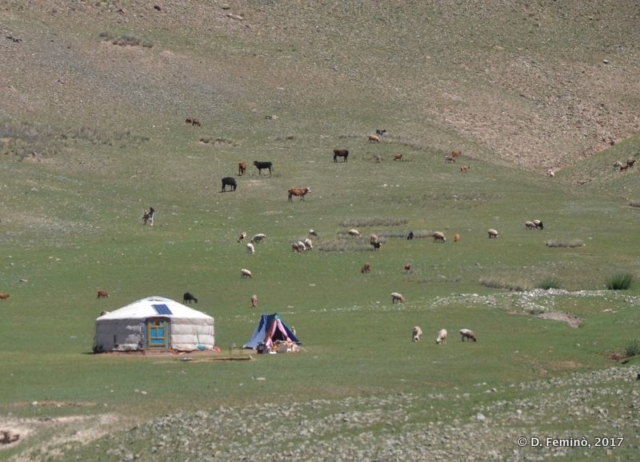 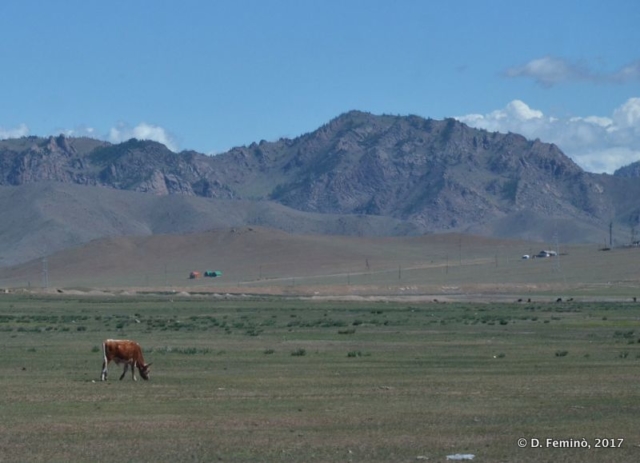 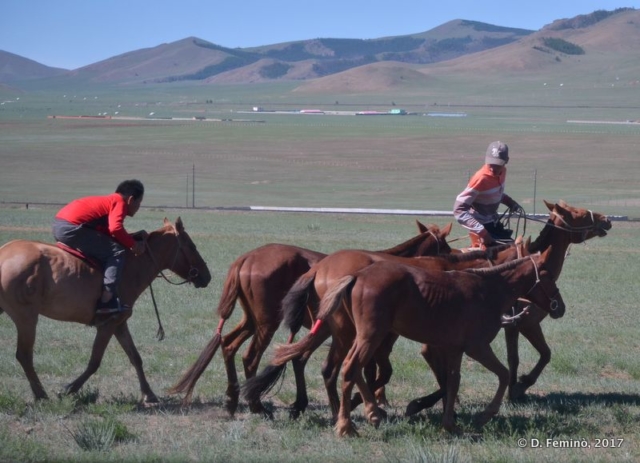