Kotor and its fortress.

Ok, shower lasted all night reducing its strength and it turned into a more affordable small rain in the morning. Nothing so strong to stop me and by the way, I’m going to stay in Kotor only today so I have no other chances than get out and see as much as I can.

My program is: morning in Kotor, afternoon in Perast and if possible in the two small islands located in front of the village. Before I need to double check time of buses that I have in plan to take tomorrow. Done that and managed also the breakfast I’m ready to jump into my visit. Since I had a quite rich breakfast I decide to start from the hardest part of the visit so tu burn the calories. 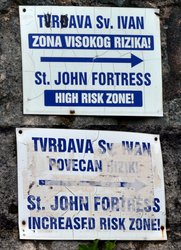 Walls of Kotor are part of the Unesco heritage list and they lays several hundred meters over the town. Fortress at the top of it is going to be the first goal of the morning. Unfortunately the same Cruise ship that was yesterday in Dubrovnik, today is here in Kotor. Likely it would be very difficult to see it again in Nikšić.
The very long path climbing the hill, following the walls, is full of people but any time I had to stop because of it I was rewarded by the great view of the red roofs on Kotor’s old town.

The path is quite hard and pretty difficult but definitely not so dangerous as the signs say. First I see a sign telling about the risk of the path and then another one mentioning the “increased” risk. Arriving at the top takes about 40 minutes. Fortress is just a bit more than ruins but from here is it possible to appreciate the peculiar shape of the ‘mouth’ of Kotor, this is the way the bay is called in Italian. By the way, in the end, international name of this country is Italian. Local name is Crna Gora that it means Black Mountain, same meaning of the Italian Monte Negro. While I’m thinking about this very interesting (!) topic, I go down in town again.

In all Dalmatia but in the end, also in Mostar, cats were a constant presence during my walk in the town. In Dubrovnik they say this is due to the high number of mice.

However no places has a massive population of cats as Kotor and here they’re proud of it and they even created a Cat’s museum containing mostly old images and posters of cats, of course. Part of the profit goes to the cats in form of food. I wonder if, this way, they would not be interested anymore in mice with negative impact on town’s health. However, cats are everywhere and it is rare to walk more than 200 meters without meeting one. I’ve seen also six of them at the same time. What can I say, I like cats as you can imagine looking at my picture so, I like Kotor as well. I promise to myself to prepare a dedicated gallery of cats’ pictures in the next weeks.

The more I walk through the old part of Kotor’s town the more it reminds me of Ohrid in Macedonia. I want to be clear, Ohrid lake and Ohrid in particular are among the best places where I’ve ever been.

Sometime here there is same atmosphere but two places are quite different and for sure Kotor is less rich and interesting than Ohrid. Centre is quite small and you can go from one side to the other one in about 15 minutes of a gentle walk. All web of little streets is certainly enjoyable but in the end there is any sight that really you would define memorable, just few remarkable churches. Last but not least is the lack of the sea. You know that is close but you forget it easily when you are on the wrong side of the walls. My suggestion is then, try to stay here at night at least for dinner because of the nice atmosphere, go to the fortress but mostly use the rest of the time to go around the bay and that is what I’m going to do.
This post continues to next page