First of May travelling.

This is the day in which after almost 30 days of moving from North to South, I will start going eastward. This should have happen, sooner or later, since I’m not aware of anyone doing the ‘round the world trip going from north to south, through the poles. Well, it could be maybe a good idea for a next trip. Isn’t it?
My bus leaves at 11:30 so I have some time and I decide to go in the centre, near the walls and have a coffee and a slice of Kadayif, a sweet similar to Baklava, sitting al fresco. Today is first of May and not far from here people are setting up a small stage for the _workers’ day celebration.

The music starts loud and with an adequate hymn, John Lennon singing “Woking Class Hero” followed by some Greek artist that I don’t but thanks to Shazam I discover being Grigori Bithikitsis singing “Tis Dikeonisis Ilie Noite” (it should be more or less “Son of Justice”). I go back to my hotel to take my stuff and then I head to the bus station to catch the bus that leaves on time. I discover that here, instead of showing the platform number, on the display they show a unique identifier of Bus. Mine is 213 and of course I’ve already understood it wasn’t the platform. 🙂

Trip to Thessaloniki is a bit long. 3,5 hours of which first 30 minutes spent in Ioannina’s traffic. After I finally see something I wasn’t used anymore: an highway! Ioannina’s lake is down in the valley, I’m leaving it behind as I did with the month of April. View from the window is quite boring, one of the drawbacks of the highways, so I take a look the at the road signs and, as usual when I’m in Greece, I’m fascinated by the greek language and all the words that we use in our everyday life, sometime with slightly different meaning and in other cases as a component of words. For example exit in greek is exodus (Exodos to be precise), lights is photo and of course I could keep on.

Thessaloniki’s main bus station is quite interesting building, having more or less the shape of an U.F.O. Each platform is dedicated to a specific destination, for example Ioannina, Athens, Florina, etc. Even if it is first of May, I don’t have to wait too much the local bus to reach my apartment downtown. Bus is going through the Egnatia street. Yes, the same roman road starting from Durrës and passing by Apollonia. Here, the urban part is one of the main streets of the town.

I don’t take a rest and then I go out immediately to start to learn about this town. I will take a look at the guide tomorrow for a more structured plan of visit. Today I will just go around to try to taste a bit of the city. Thessaloniki is always neglected by the tourism and I’m wondering why. Ok, compared to Athens has surely less to see but how many towns in the world have more to see than Athens?

This is the second biggest town in Greece, it was always an important place for trading being on the way to Turkey and East so, how can be without attractions? Of course is not. 500 meters from my apartment I have the proof with the arch of Galerius and the Rotunda. I will tell you better about these two monuments tomorrow. For now I don’t stop too much in all these sights. I want to try to get the spirit of the town, if I can. This is a big place, more than 300.000 inhabitants and the atmosphere is of course totally different from most of the cities and villages I’ve been so far in this trip and I have to admit that I missed this kind of feeling. I needed some dose of urban energy and Thessaloniki is full of it. On the Egnatia street there are a lot of people. Most of the shops are obviously closed due to the holiday but cafes, bars and bakeries are all open. Good for having a quick lunch on the go. From the bus I’ve seen a square that looked beautiful and I’m walking in its direction.

It is Plateia Aristotelous (Aristotele’s square), a huge area connecting the Egnatia street with the seaside and crowned of beautiful three-storey houses. It is one of the meeting area but today, a holiday with a temperature of around 30 degrees the most loved by locals is the long boulevard by the sea, where I am now.

On my right side I can see the harbour and on the left side one of Thessaloniki’s landmark, the impressive white tower. I go towards the tower walking in a huge crowd. There’s not enough space for all people also because of the stalls selling souvenirs, sunglasses and shoes. Pedestrians are often invading the cycle track. I keep going on and I overtake the white tower and I see another one, a more modern tower. I don’t know exactly what it is but it looks like a control tower, maybe for ferries. Close to it there is a trade fair area with a flower market. I go in for a while. Unfortunately, even if the temperature is high, the sky has a thin veil of cloud that makes the light not perfect for pictures. While I go home, I’m wondering if there is any chance to see later a nice sunset since the position of Thessaloniki’s bay should be favourable. In the evening, when I get out for dinner and sunset, I enjoy the first one, with some fish but not the second one, since it is too cloudy however there is the chance to get some atmospheric photo of the port as the one I’ve used as a cover. I hope in better luck tomorrow.
Please now take a look at the gallery of Thessaloniki that includes all pictures taken in both days of visit. 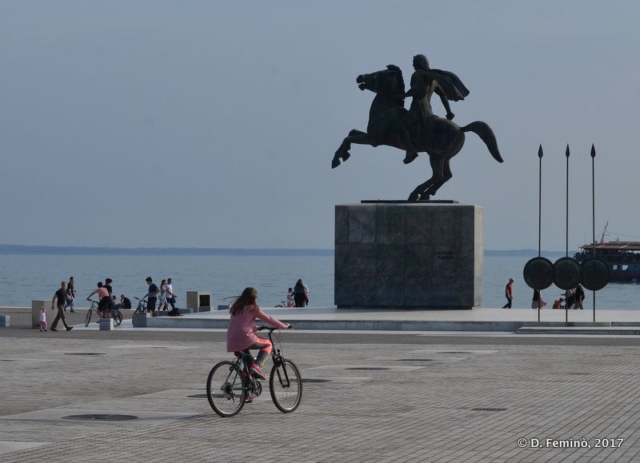 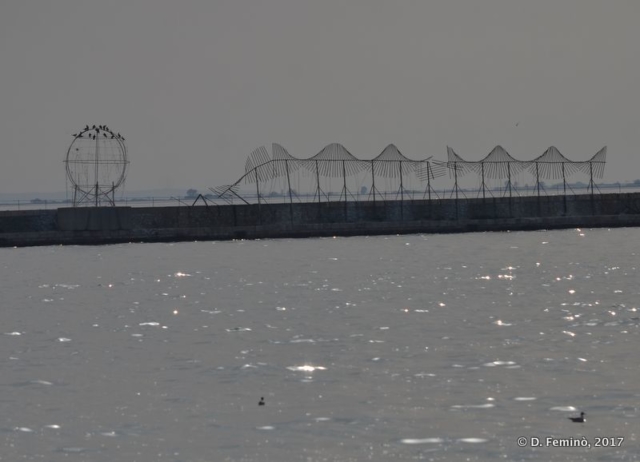 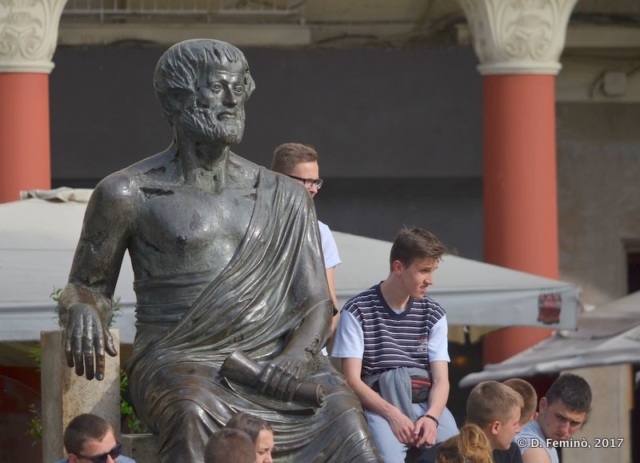 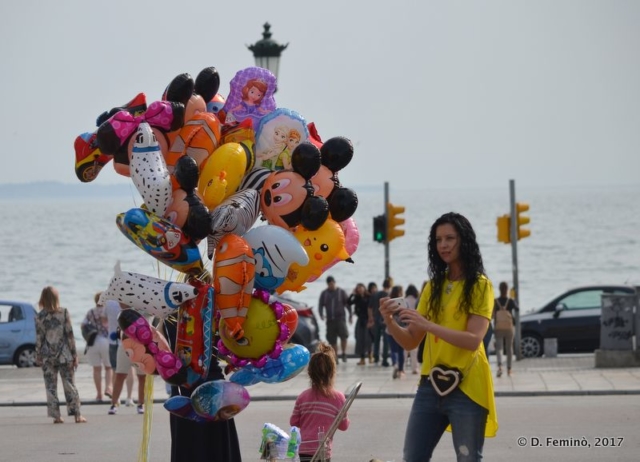 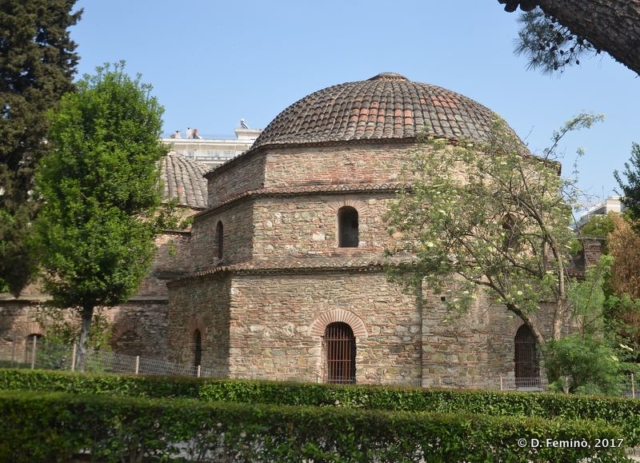 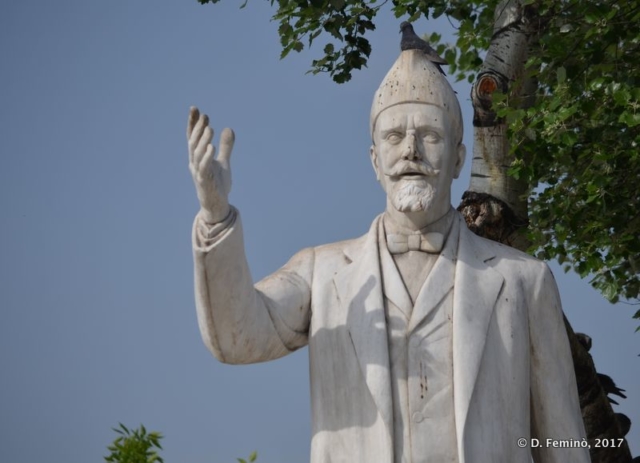 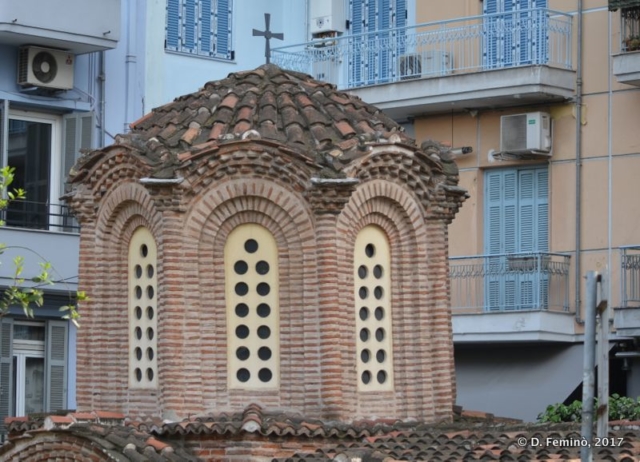 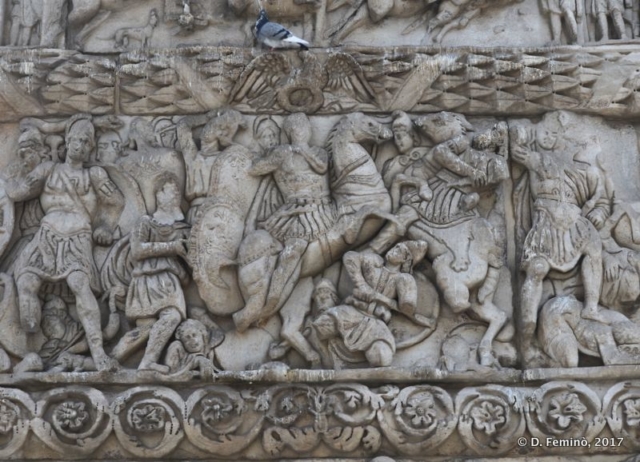 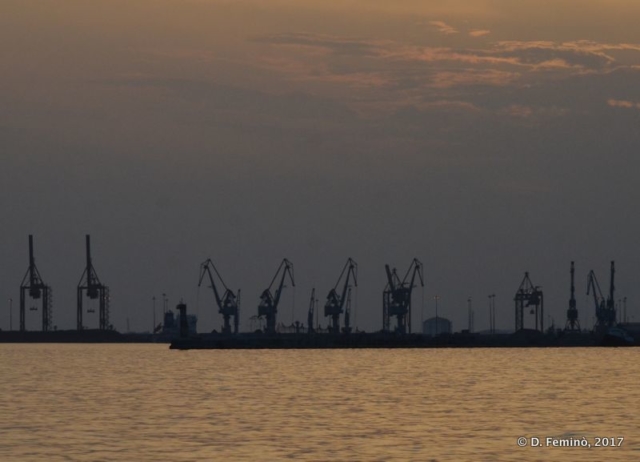 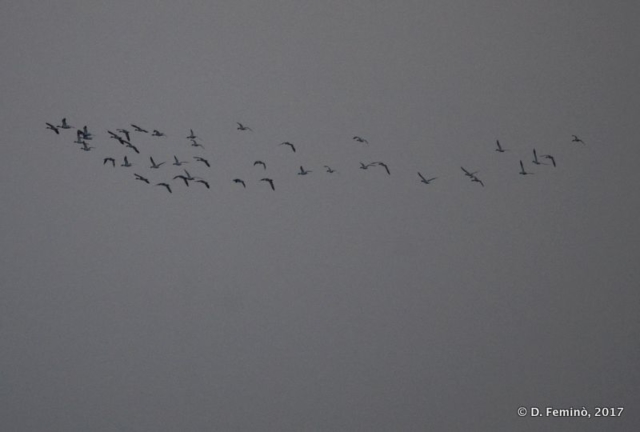 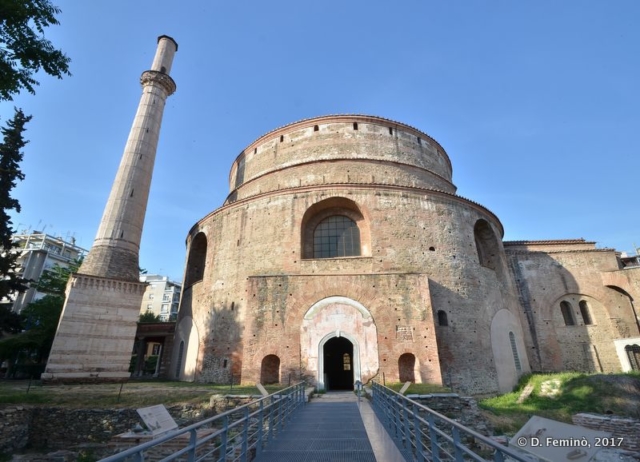 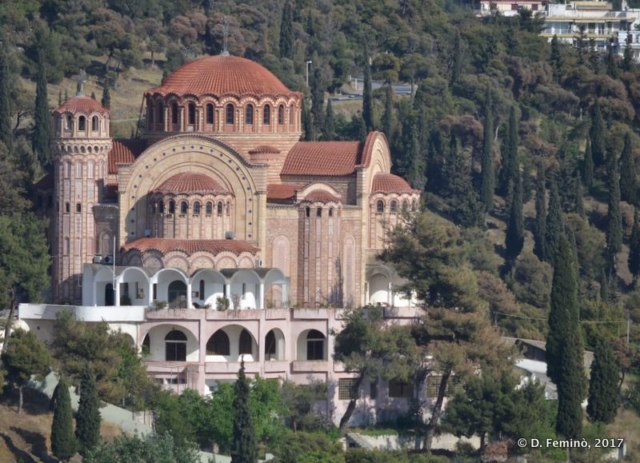 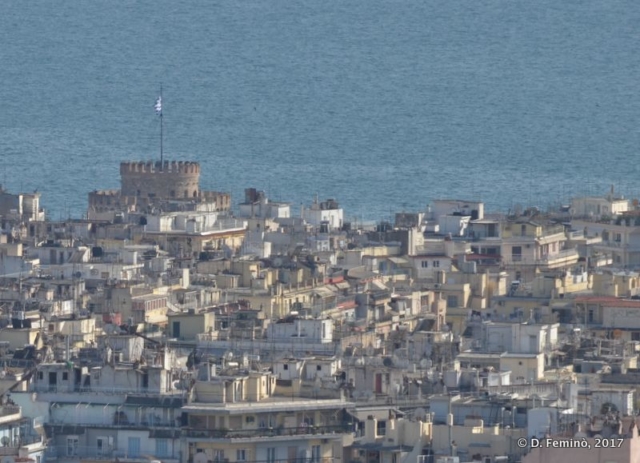 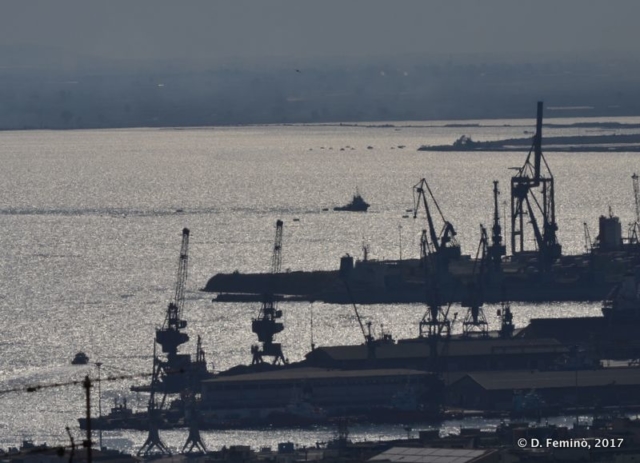 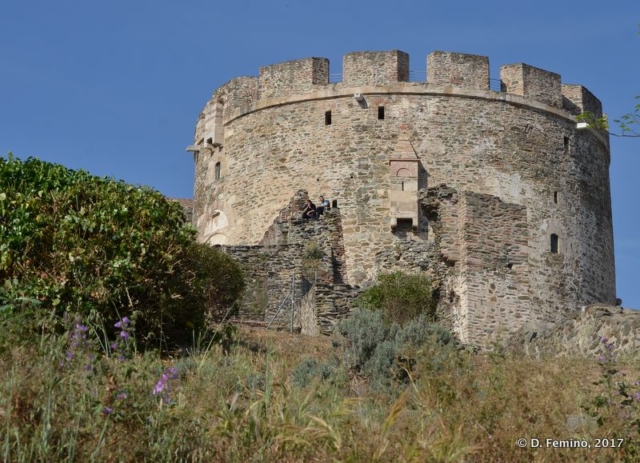 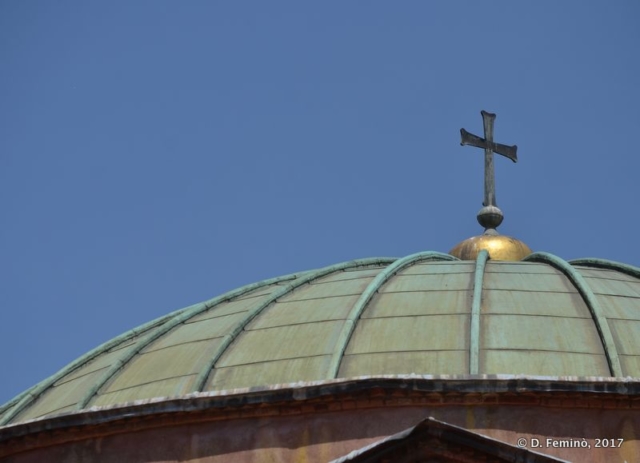 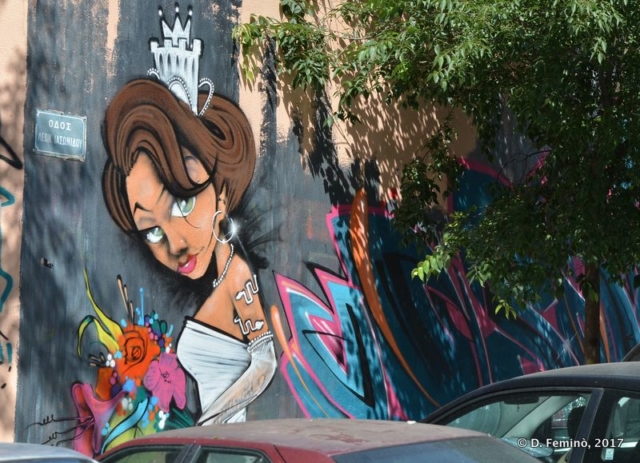 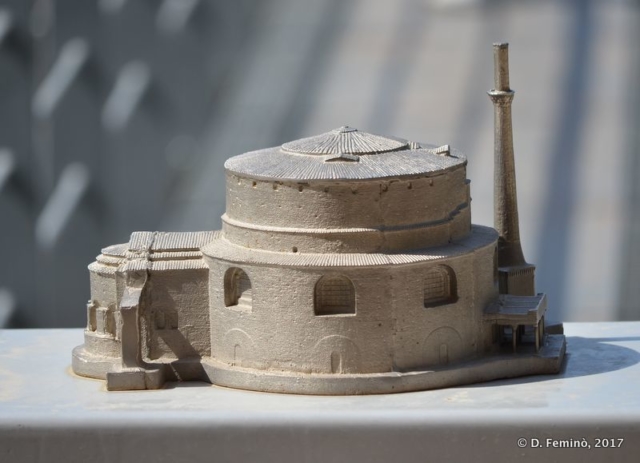 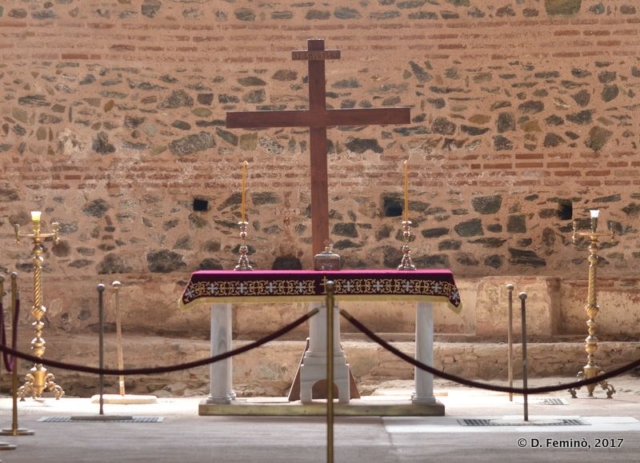 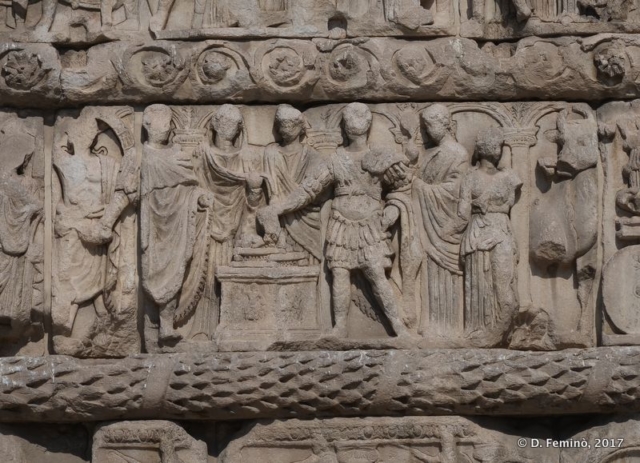