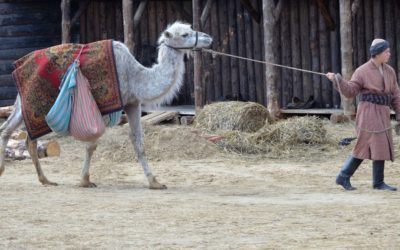 Visiting Tobolsk required a detour from the main path of Trans-Siberian railways but surely it was worthy. However, as you can see in the small map, now that I have to go to Omsk I need first to reach Tyumen to get the main Trans-Siberian line and from there catch another train to Omsk. 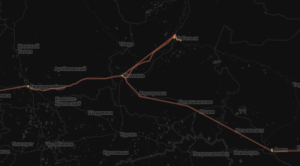 I have in plan to go to Tyumen during the day, spending the entire afternoon and evening there and then catching the night train to Omsk that leaves around midnight, local time. In order to avoid problems with schedule of trains that as we know follows Moscow Time I decided to keep my watch on that timezone leaving mobile phones on local time. I’m a bit lazy in the morning and in the end I prefer to take a taxi to the railway station that is quite far from the centre. My taxi driver is a nice lady on a private car but she has a very aggressive way of driving. Since I don’t need to sleep I took a third class ticket but this one is different from the one I got on the way to Yekaterinburg, there are also berths, a lot of berths! Basically for each compartment there are six beds: four located transversally and two on the direction of travel, of course arranged on two levels. On my place the berth is not open so I can use it as a bench and sit. I have also a power socket all for me and I’m close to the window. Not so bad in the end. As usual train arrives on perfect time in Tyumen and leaving the luggage is not a complicate matter so I’m quickly ready to visit the town.

A perfect combination: time for circus.

The photographer of the Russian railways I met in Yekaterinburg knew pretty well Tyumen and suggested me an itinerary around town that should be nice and interesting and I would like to follow it.

I didn’t keep under proper consideration weather conditions that instead look quite bad. I’m following the main avenue connecting Railway Station to the river and while I’m close to building of the circus it starts to rain. Bad story. What I can do here if it rains? I check if by chance there is a show at the circus and I’m very lucky.

One show will start in about one hour. Just perfect. I buy the ticket, I go to quickly eat something, Georgian of course, and then I’m ready for my second Russian Circus Experience. I have to say that I’m not a big fan of Circus but in Russia is a completely different story. Here they’re crazy for it.

In any big town there is a dedicated building aimed to host circus shows and the quality is usually very high. I saw it once in Moscow and now I’m going to see it again here. The show however is made by a Moscow company, the Nikulin Circus, a very famous and old one (est. 1880). As usual there are a lot of children. My sit is in top central position so I can take a lot of pictures.

In Moscow this was forbidden but here everything looks more relaxed. The show starts with a dance act and then is the turn of a couple of funny clowns. Numbers are following one after the other without any break. Acrobats together with clowns and animals are pillars of the circus so we have also them but is the next number the most amazing to me.

A lady that is dancing and at the same time is quickly changing her dresses. I understand of course that she has all dresses on at the same time in layered way but nevertheless even taking pictures at high speed I can’t see the evidences. The circus show is made of two parts. First one features still an act with camels then another one with acrobats and finally a long one with bears. Now I have to say something.

I’ve talked already about condition of bears in captivity in my previous post about Transylvania after visiting the Libearty Sanctuary and of course I would prefer to know that bears are free in the wild but I can’t deny than number with bears is simply great. They are incredible. I really do hope that in order to reach this kind of ability the tamer has to treat them well.

Looking at them it comes to my mind that the bear in Masha and the Bear is a retired circus “actor”. Who knows if in Russia where bear is a beloved animal the one working at circus have a place like the one in Romania for their “retirement”. I have a lot of time to think about these things because after the bears’ act there is a long pause. Second half of the show starts with a number featuring classical and modern dance mixed with exercises of acrobats. A strange mix but pretty captivating. Among the following acts there are many other with animals: small horses, crocodile, parrots. In the show I saw in Moscow there were just tigers here instead use of animals is much higher. The clowns are involving the audience some time with additional fun. In short this is a very well done show and you don’t need to know Russian to enjoy it. I was happy of choosing to come. As I said elsewhere, no trip to Russia can be considered complete without going at the Circus.

After the show I have the good surprise that rain stopped so I decide to walk finally until the riverside along Tura. It is unfortunately too late to visit the monastery in spite of my run. Darkness is falling over the town.

Even if in hurry, on the way I can’t refrain to stop in order to take a look at few beautiful orthodox churches like the Cathedral of the Icon of the Sign and the Church of the Assumption. When I reach the river I can only see monastery’s silhouette against the sunset.

It’s a nice evening and the pedestrian area by the river is full of people. There are also buskers: a girl playing songs of Adele with the violin, a pairing that I find quite terrible to be honest and there are also three girls playing with fire torches, just to remain in the circus atmosphere. In the end I saw something of the town and I enjoyed a nice afternoon at the circus. I could be satisfied. Now it is time to get closer to the railway station.

Once I’m not far from there, I stop in a pub serving local craft beers until it’s time to go. I don’t eat anything because this time I know dinner is included in the ticket price and therefore, the first thing the cabin attendant tells me when I’m on board is “go to the restaurant”. No problem, I love to do it. I spent some time eating and drinking at the restaurant until they close and then a long sleep until Omsk, my next destination. Here it follows a photo gallery with pictures taken at the circus that is absolutely new. None of these pics were shown even on Facebook! 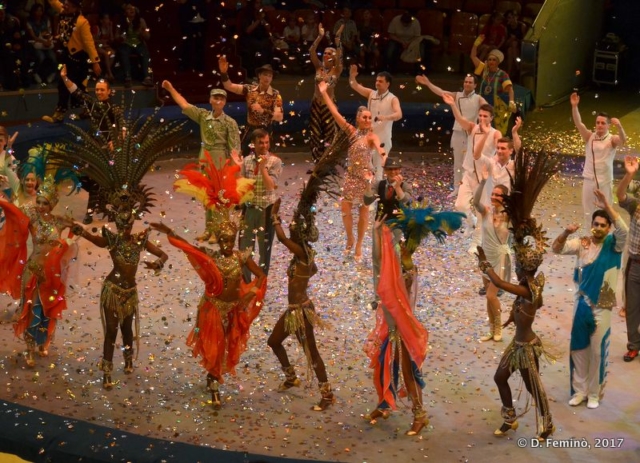 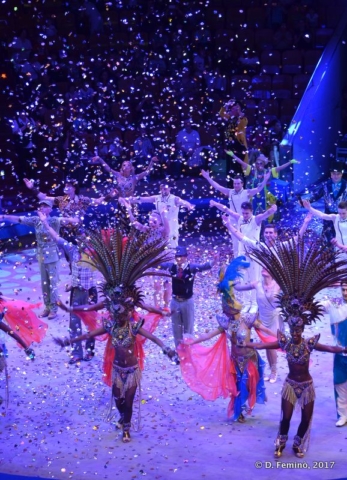 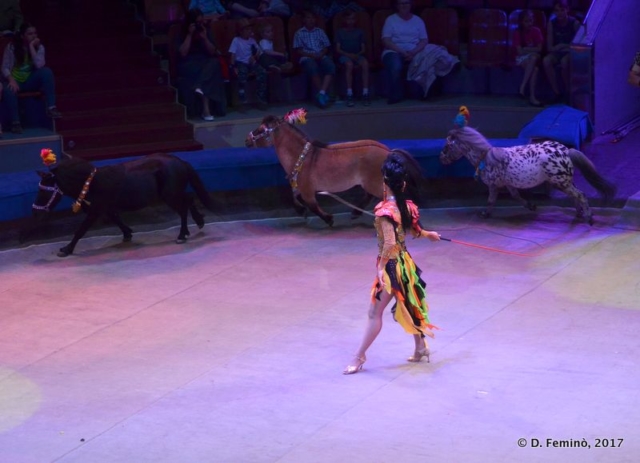 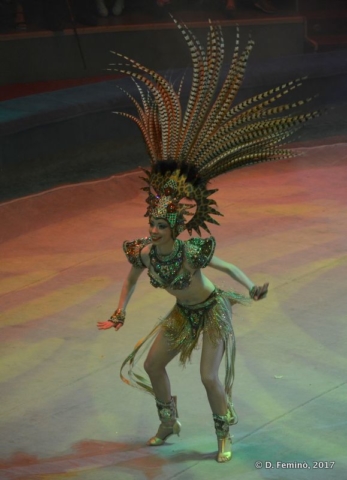 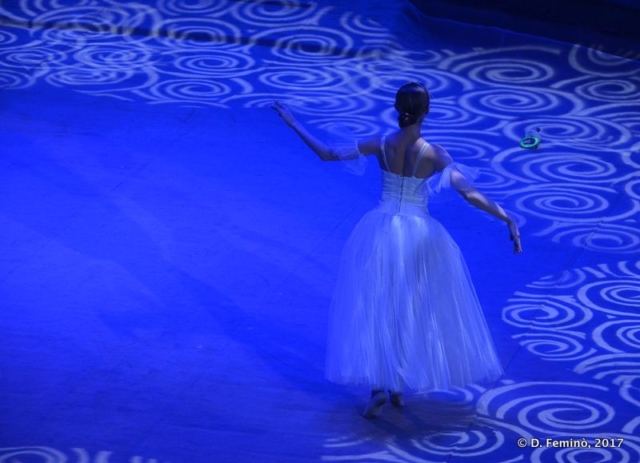 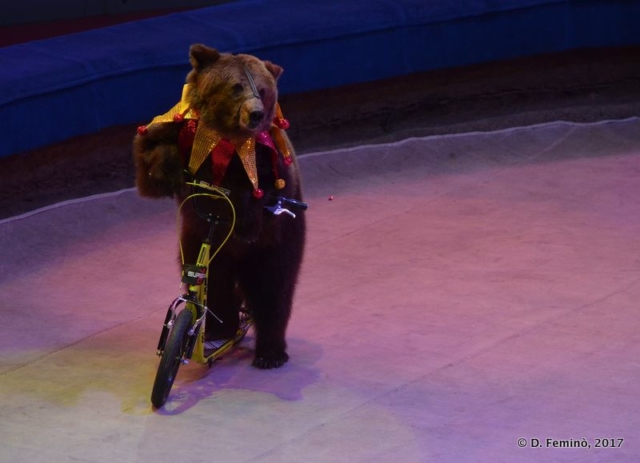 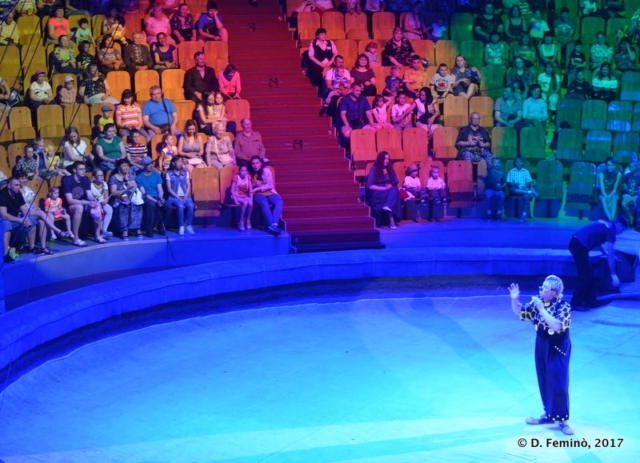 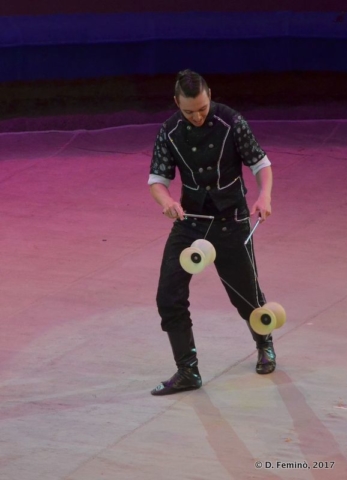 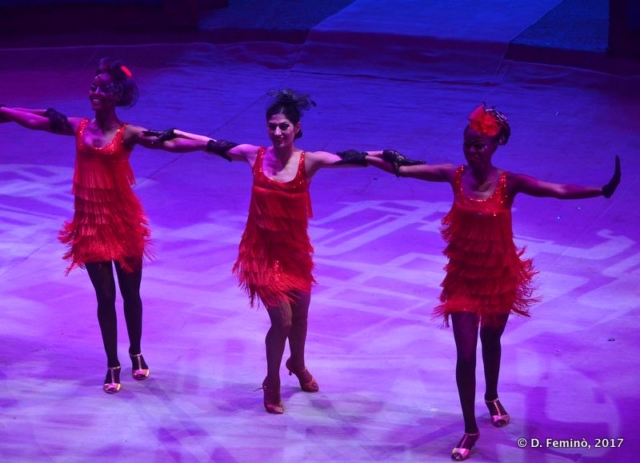 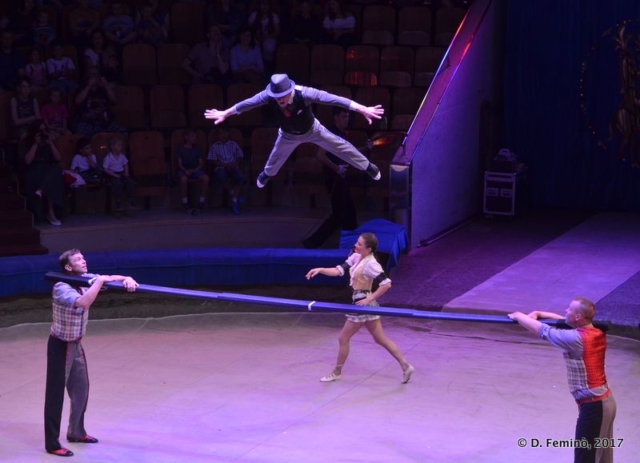 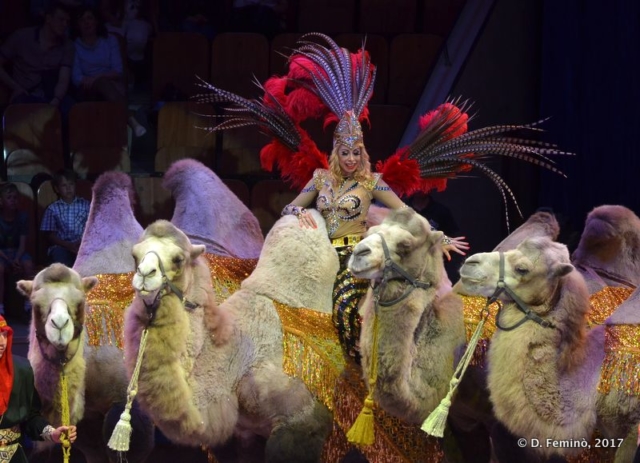 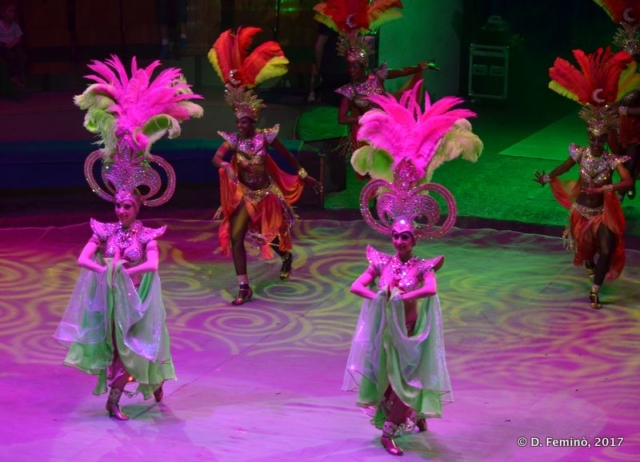 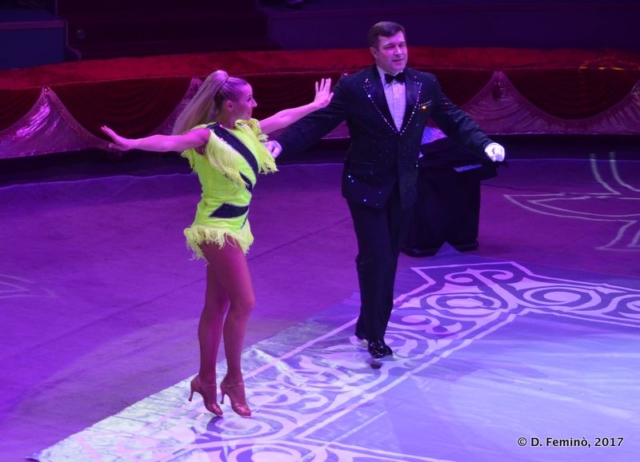 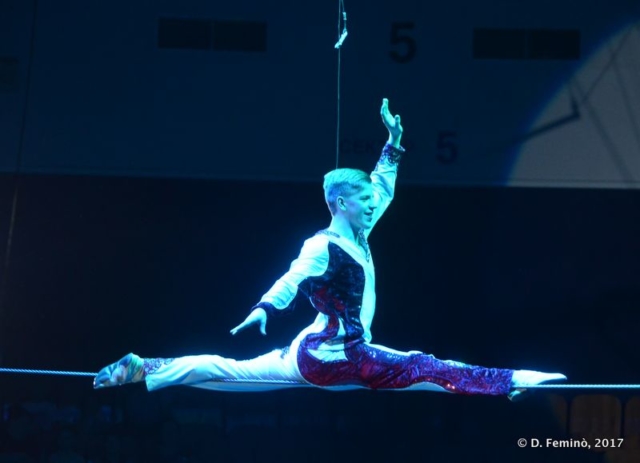 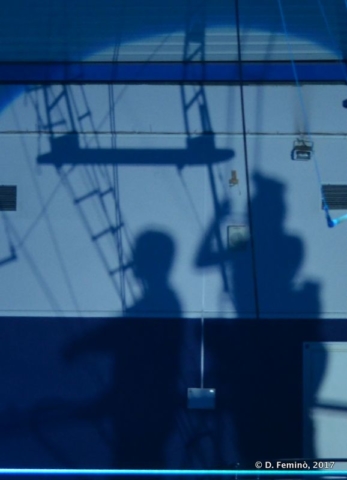 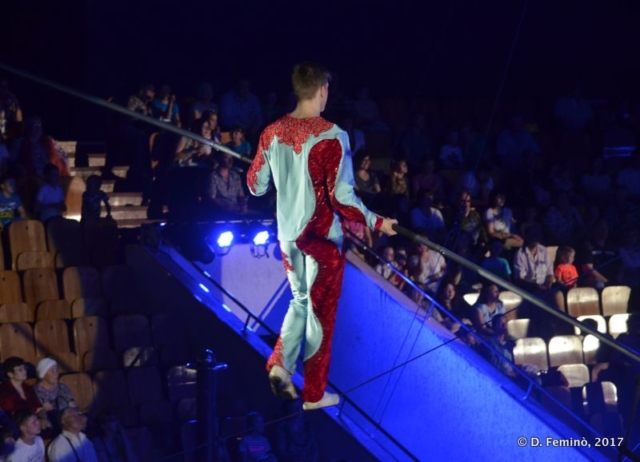 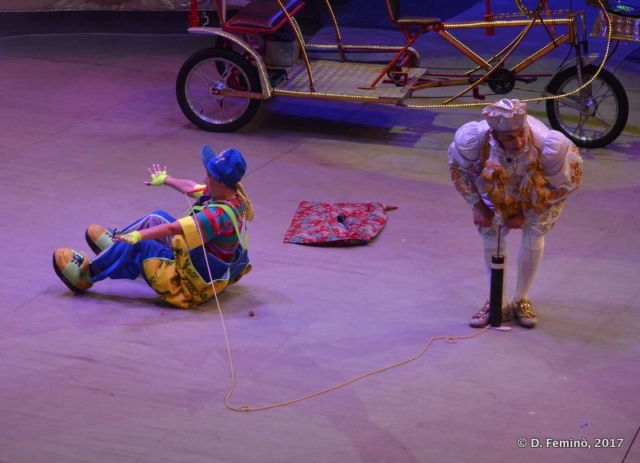 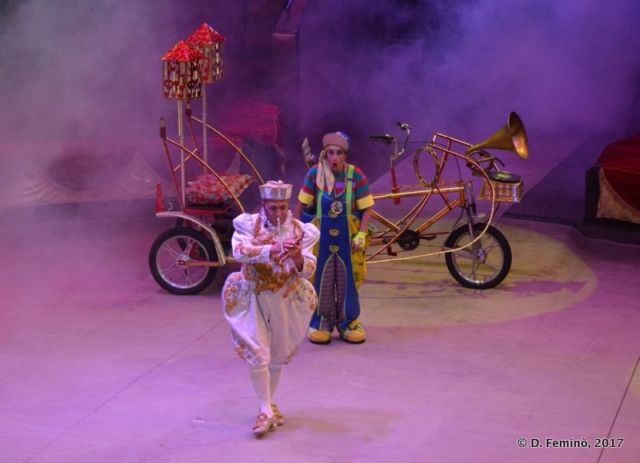