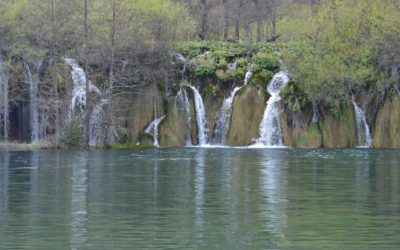 Changing my mind so quickly.

Due probably to that bit of accumulated laziness I was mentioning in my post about second day in Odessa, now it is more difficult to be committed to a one-day excursion as I did several time especially in Croatia and Albania.

Provided that I already had to exclude the idea of going to Chernobyl because there were no available places anymore and, by the way, price was quite crazy (more than 100 Euro), I’ve considered to go to Chernigov, similar name but completely different place. In this case it is a village with a precious old town.

In order to reach it I take the metro going to Lisova station where there should be minivan going there in about two hours. Red line of the metro crosses the river Dniepro on a bridge, not through a tunnel and the view I see is really incredible. The beautiful Unesco site of Pechersk monastery is shining with its golden domes and white walls under the sun. By the way, I didn’t say it yet but today seems to be a wonderful day. At this view I start to think that tomorrow I have a flight to Tallinn in the early afternoon and that because of that I will have very few hours to spend in Kiev. Now, I’m asking myself: does it really makes sense to stay at least four hours in a minivan to see a probably nice town while I have Kiev and good weather? I took two stops of the metro, a pastry with cheese and a black coffee to find the answer. Based on that, I’m taking the metro backward to stay all the day in Kiev.

Roughly at the two sides of the bridge there are metro stops, one is called Dnipro, on the central part of the town, the other is called Hidropark.

I get out on the latter because I want take pictures from the opposite side. This area is also called Hidropark as the subway station and it would be probably very crowded during Summer because it hosts best Kiev’s beach and of course also some cafe and restaurants. Someone of you could maybe ask about Kiev’s beach. Well, yes, as I saw also on Tiraspol, in these towns there are beaches on the river bank. I have no idea if the water fulfil all health requirements for bathing but I’m sure that in summer when the sun shines, here there will be tons of Kievans sunbathing and swimming.

I’ve said when there is the sun on purpose because the wonderful sunny day that so much influenced my decision of staying in Kiev seems to have gone. Now I can estimate 80% clouds and 20% sun. However, now I’m here and then I go along the beach with a privileged view on the Pechersk Unesco Site and on the huge Motherland statue similar to the one in Tbilisi called Kartlis Deda (Mother of a Georgian). On the beach there are few people sunbathing but someone is going away due to the lack of the raw material: the sun. There are a lot of fishermen with the cane pole. I keep going on but when I’m close to the other bridge I discover that I can’t use it because it hosts a sort of highway and I have to go back.

A quick lunch and some climbing.

Even if the sun seems to play hide and seek, day is hot and so far I think I walked already some six or seven kilometres so after crossing the metro bridge on foot, I look for the first place available to drink a fresh beer.

Close to the bridge the only place seems to be one with a curious name. Gangnam style, like the South Korean song. Inside instead is absolutely Ukrainian (or maybe Russian, I don’t see much difference) style Stolovaya. I take the wished beer but then I decide also to eat a shashlik. There are two girls inside the bar, the waitress and a friend of her. They’re very friendly even if they don’t speak any English. After lunch I would like to finally reach what I’ve seen from the opposite bank but apparently there is no a shortcut to climb up. Theoretically one should go about one kilometre along the main road and then going back, slightly uphill through a second one. I really don’t want to do that and so I study for few minutes my map and I decide that it should be quick to climb up on the little park on the hill laying over the metro tunnel. At the beginning I’m not so convinced but when after 300 meters I start to hear roar of cars on the upper road I realise that mine was a good idea.

Before reaching Pechersk, I go through two memorials, one to the unknown soldier and one dedicated to the famine occurred in 1932. In this one there is a tower issuing modulated whistles and their effect is really quite moving.

There is also a statue of a little girl, the saddest statue I’ve ever seen in my life. You really would like to hug that little girl to make her smile. From here is a 5 minutes walk to reach the Pechersk monastery. When I arrive I have to face a quite complicate list of ticket options.

I choose one including indoor sights but not including photo, taking for granted that outdoor would be always possible to take pictures. Elsewhere maybe, but not here, so I have to get back and pay additional 300 Hrivnya for it that is quite a lot in this Country. The monastery is huge and it has a many sights to visit. I do that partially with a Japanese guy. We are both interested to Cave churches. They are the most important sites here but probably more interesting for locals than for tourists. Cave churches are two and I visit only one.

What you actually see is just an intricate gallery, very dark, where you don’t have anything to see apart a lot of coffered that the locals worship and kiss. Talking about kisses while we get out from the cave church and while the Japanese and me are looking for a spring of water we will never find, an old lady comes to me and starts to hug me and kiss me several times. It says something in Ukrainian that I don’t understand. I really don’t know why she does that. She doesn’t seem drunk.

Does my hair give me such a mystic look? No idea. However, I hope in the future this mysterious special power will work also with younger women. 🙂
Meanwhile the sun eventually won its battle with the clouds so now it is a real pleasure to go walking around. I reach the Gallery of Heroes and the statue of Motherland. This memorial looks somehow like the one in Brest in Belarus but that one was much, much more moving. I notice a map of Ukraine made with flowers where they still include Crimea.

I start to feel a bit tired but I decide still to go through the Pechersk Landscape Park, where there is a neglected fair of flowers. No one seems to care of it. I sit in this quiet atmosphere drinking a coffee and resting a bit. Ok, sun makes me energetic but I can’t keep going on forever so, after some more time spent taking pics in Independence square, where I get by metro, I finally go back home. In the evening it is time to taste Ukrainian food and for this I choose Taras Bulba restaurant where I get Borsch and Kievski Cutlet, probably the two most famous Ukrainian dishes. I like a lot the Restaurant for the food and for the very friendly service. This way it basically ends the part of my trip spent in Ukraine. Tomorrow I will fly to Estonia so don’t lose this last incredible chance to see my pics of Kiev. 🙂 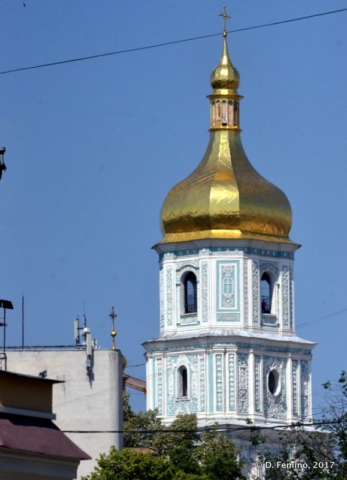 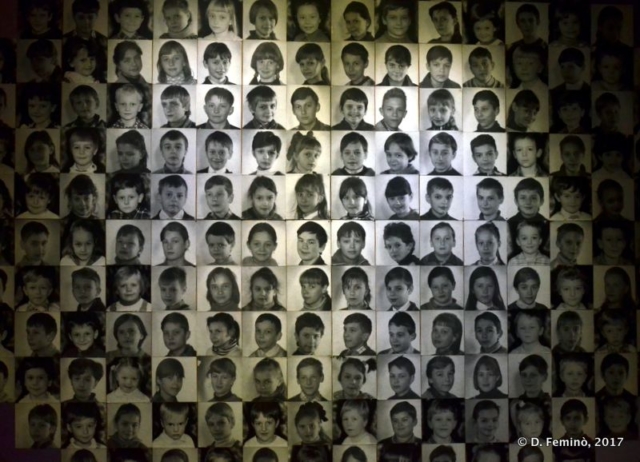 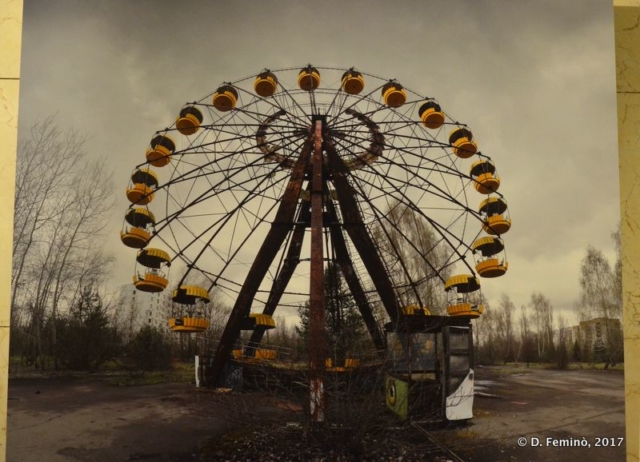 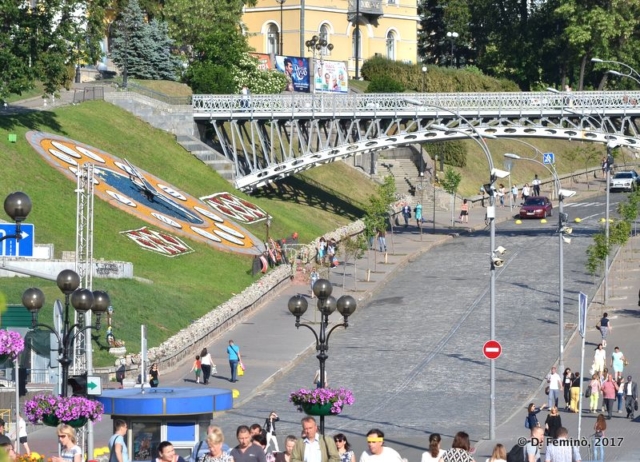 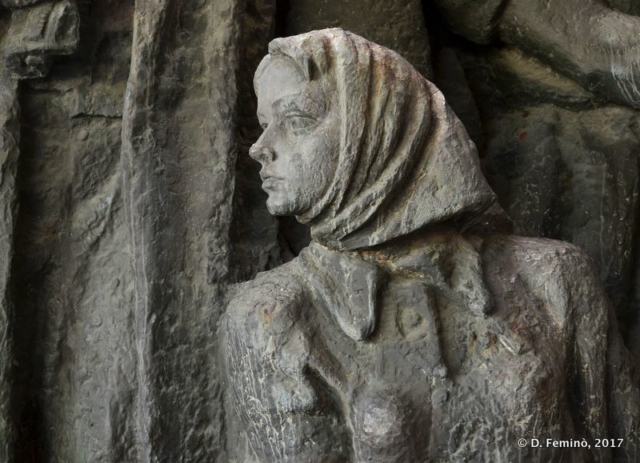 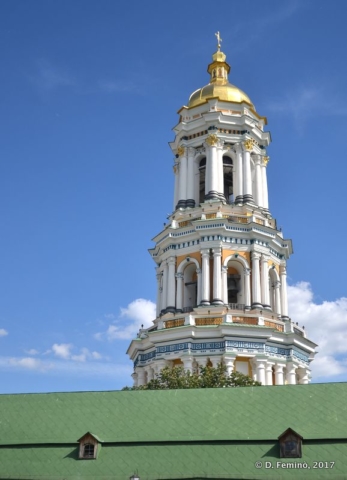 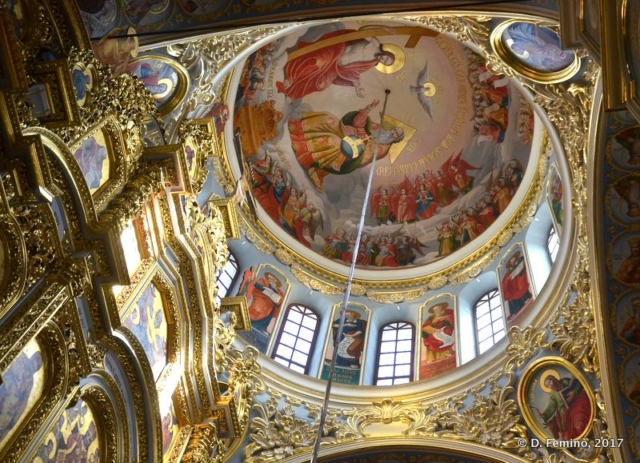 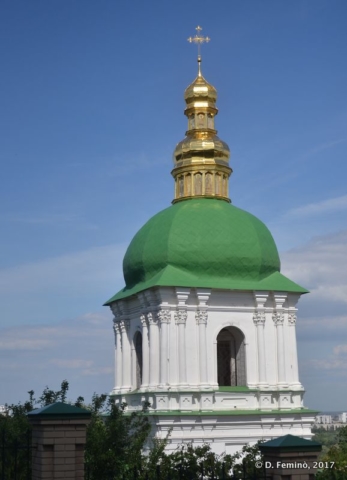 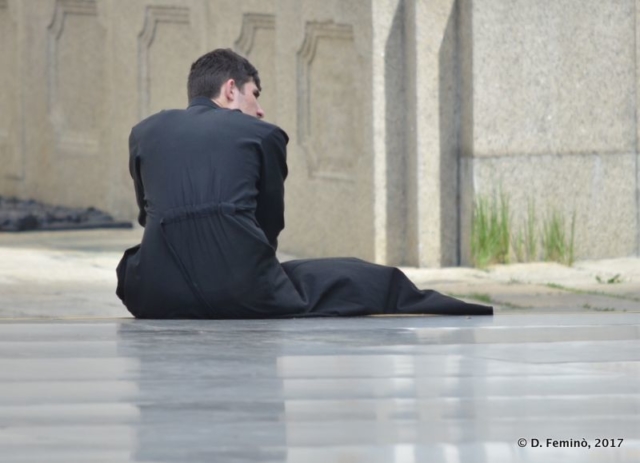 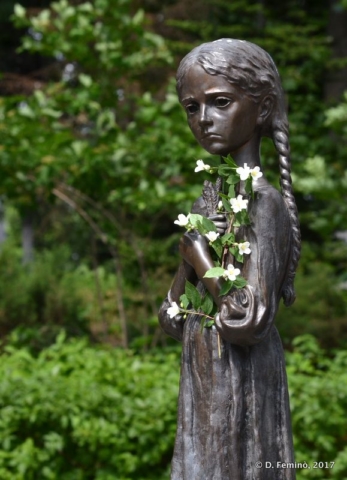 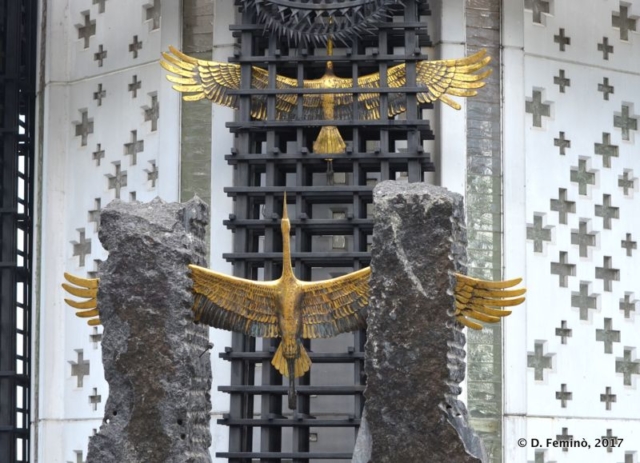 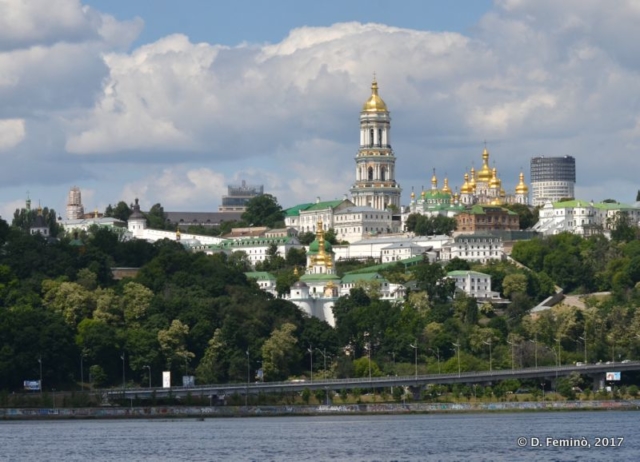 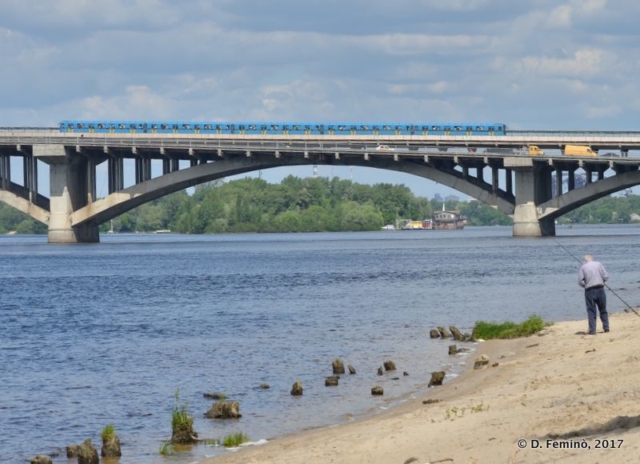 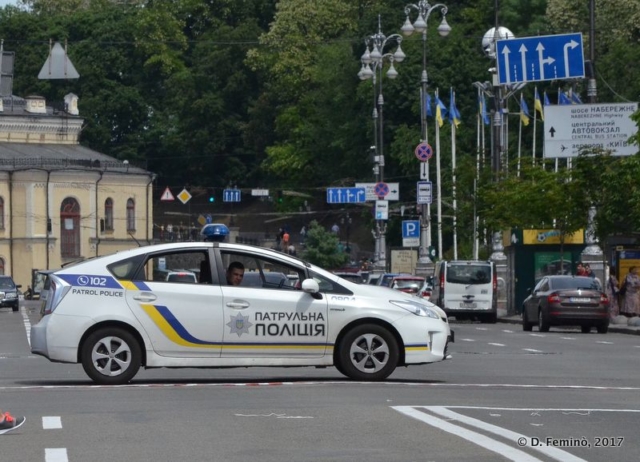 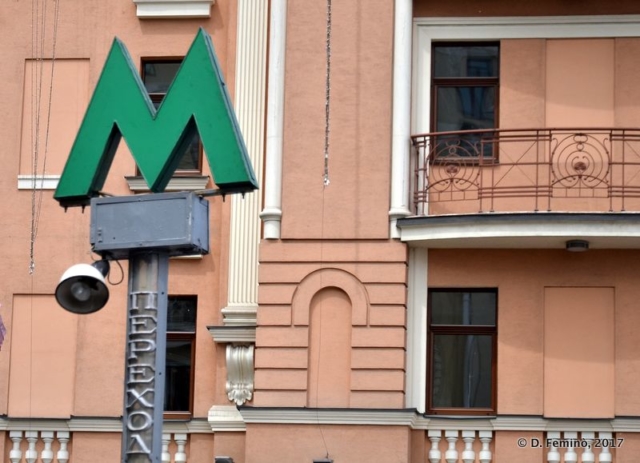 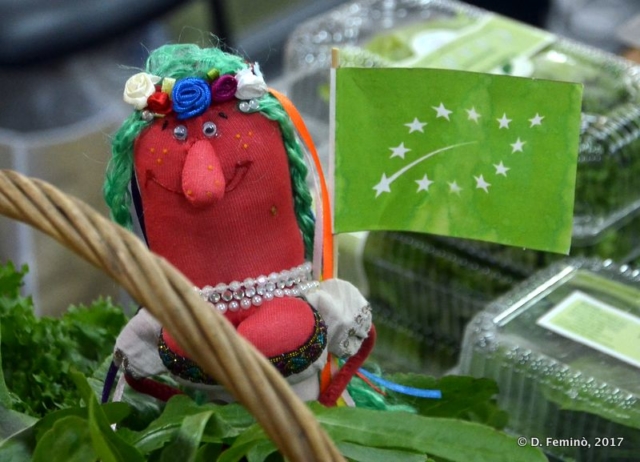 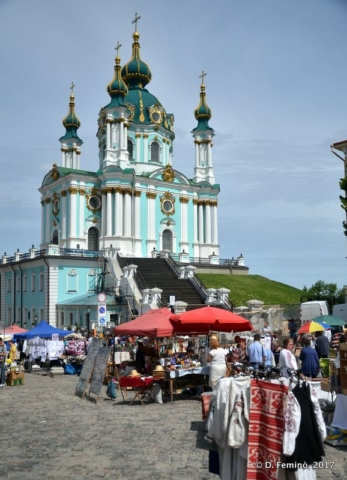 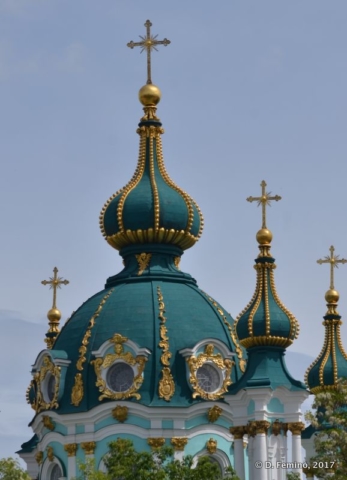 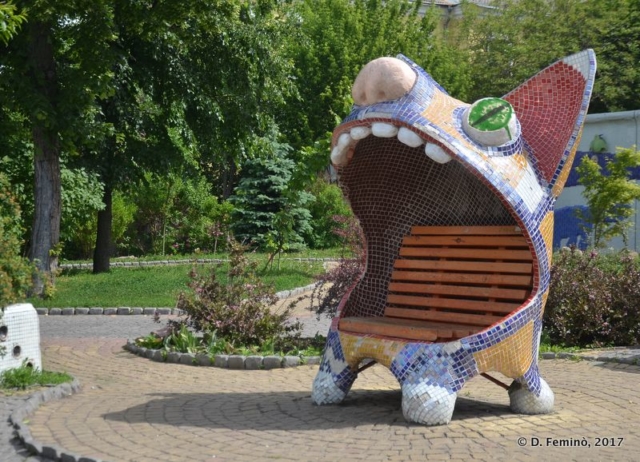 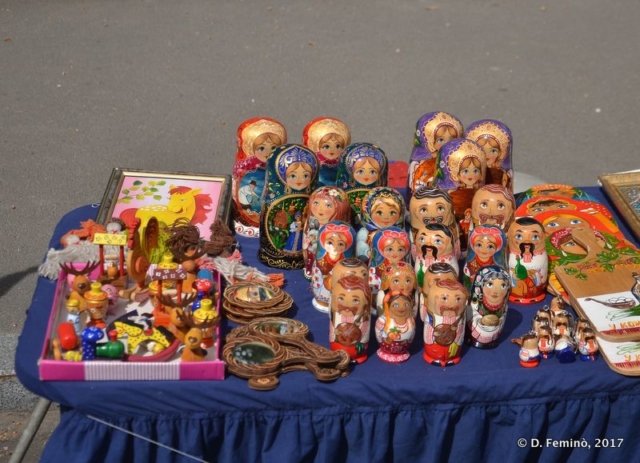 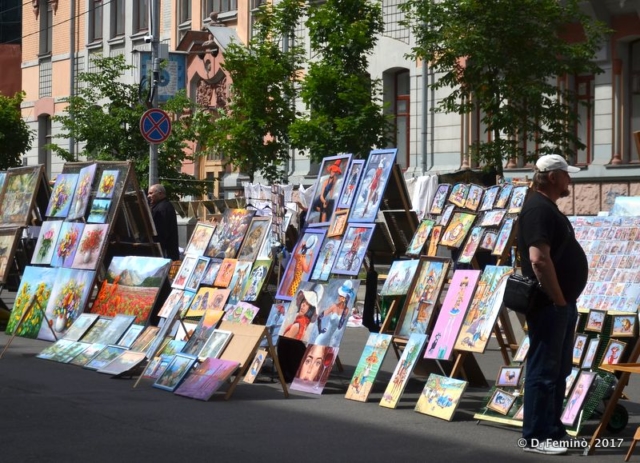 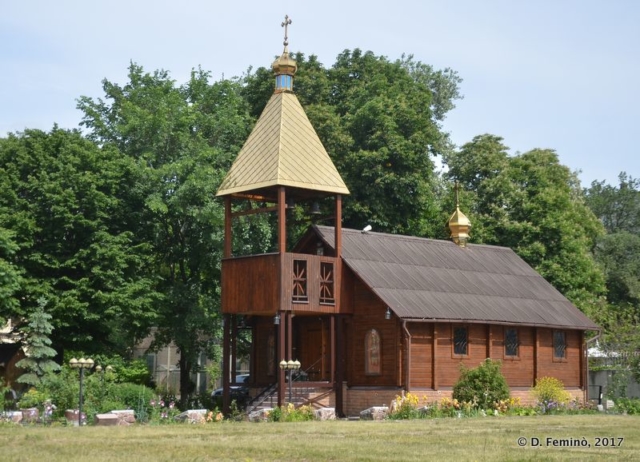 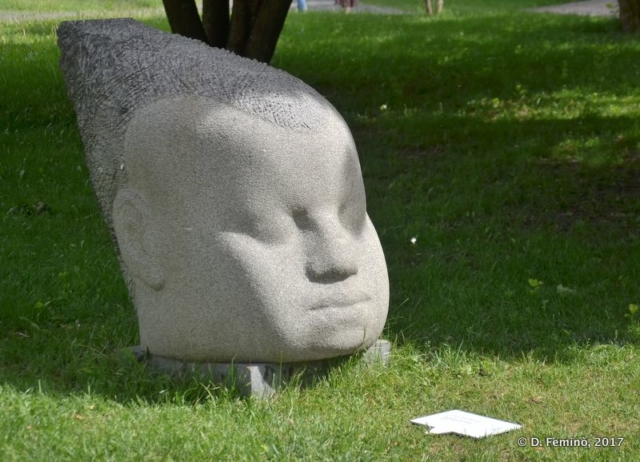