Starting with a quite complicate trip.

In the morning the fairytale girl of the apartment comes to take me to bring me at the bus station. Honestly I’m starting to wonder whether she is just very kind or she’s not instead a sort of Mata Hari checking that I’m actually leaving the country because, she first calls a taxi, then she comes with me until the bus station, here she checks that I buy the ticket and in the end she brings me to the bus stop. Maybe she fell in love and I didn’t catch it… 😀
Bus leaves on time at 09:30 and the trip is expected to last around 3 hours. Controls on Transnistrian border are quite fast. By the way, I’m thinking that since I have a Moldovan entry stamp but not the exit one, I would have probably problems if I ever want to enter again in Moldova, unless, of course, I will not enter through Transnistria. On Ukrainian side is a completely different story for what it regards control. They check both my luggages very carefully and they want to know even about coins I’m keeping in my backpack as a souvenir from each Country. They want to be sure are not ‘antiques’. Looking at them they grumble a bit seeing my Trasnistrian Kopecks. However, after all these long controls, bus is mysteriously still not leaving and we are all wondering why. Reason is that there is a problem on gears so we need another bus. A small minivan finally arrives.

There’re not so many passengers so it is enough. In all this mess I almost forget few personal things on previous bus and to collect them I jump among different areas of the borders under the flabbergasted eyes of the guards and making crazy the little army dog checking for drugs in luggages. Eventually we leave. Road to Odessa is quite bad. I know sea is in front of me but there’s no sign of it. All around there are only fields with peasant going on bullock-carts and collecting hay with pitchforks. After about three hours we reach Odessa and its bus station. This town is called sometime “Odessa Mama”, because is considered mother of Russian Mafia with Rostov on the Don being the father. From here I take a Trolley Bus to the Railway station that is not far from my hotel so I can walk to it.

Best town I’ve been so far.

Hotel is great since it is located in an old building in the very centre of Odessa and it has artistic decorations on the ceiling.

Today is a sunny day and the first impression about the town has been very positive so I really don’t want to waste any second. Just the time to leave the luggage and I’m out. I got two small guides from the very kind receptionists and so I’m ready to use them. First of all I head north because I want to reach the Potëmkin Stairs and the black sea.

Whenever I visited towns on the black sea: Burgas, Varna, Costanța, weather was not good. It is finally time to turn the colour of the sea from black to blue. But there are so many things to see while I’m going to the stairs! The Opera and Ballet theatre is spectacular and also the nearby square with the Archaeological Museum and the Laocoon fountain. Then, from here, it starts the lovely Primorska street leading to the Stairs.

Unfortunately the world famous flight of steps is closed so I can’t go on it. There are works and the entire area is closed to the public. Now I have to walk back to find another way to reach the Sea Station, my next destination. In an underway passage there is a lady playing the accordion. When she catches I’m Italian she immediately starts to play “Torna a Surriento”. On the main dock of the port there is a quite peculiar statue: the “golden boy”. At the end of the dock dominated by the huge building of Hotel Odessa, there is a small church. From here I can see the lighthouse. I feel very energetic because of the sun, so after the dock, I want to come back in the centre from another route. I end up in Katerynyns’ka Square square where there is, of course, a monument to Catherine the great. Sitting on a bench there is a lady with a quite peculiar pet: a huge parrot.

She’s really not there for tourists she’s just enjoining the day with her bird doing the same. I keep going and I’m again on top of Potëmkin Stairs. From here, is as short walk to the pedestrian Derybasivska Street full of festive people around, some wearing traditional dress. What a beautiful atmosphere! As very last sight of the day I’ve kept the Passage between Derybasivska and Preobrazhens’ka.

It is a small gallery but incredibly rich of decorations and sculpture that you can’t avoid to be amazed. I keep going around the pleasant streets of the centre that reminds me a little bit the ones of Alma Aty. In the evening when it’s time to dine, I go to a Georgian restaurant near my hotel. I love Georgian food and I can’t resist. Katchapuri, Badrijani and Saperavi wine are the perfect end for one of the best day since I’ve started my trip around the world. Here it follows the gallery of my days in Odessa. 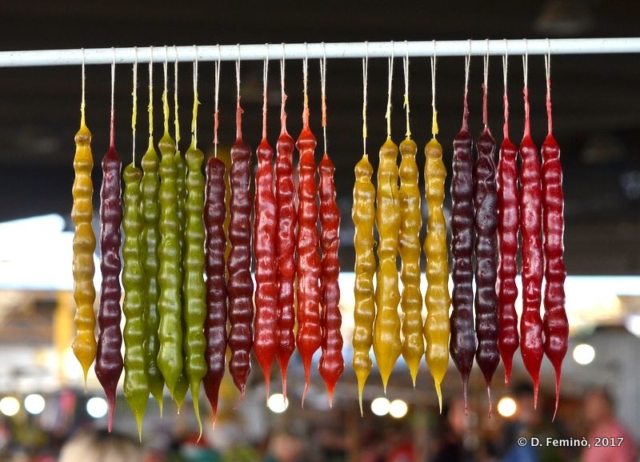 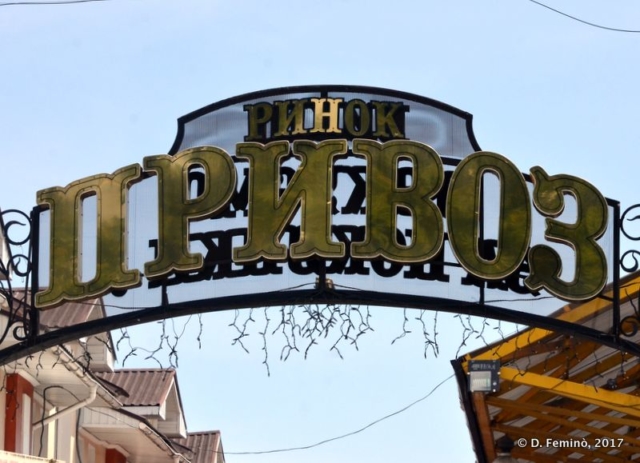 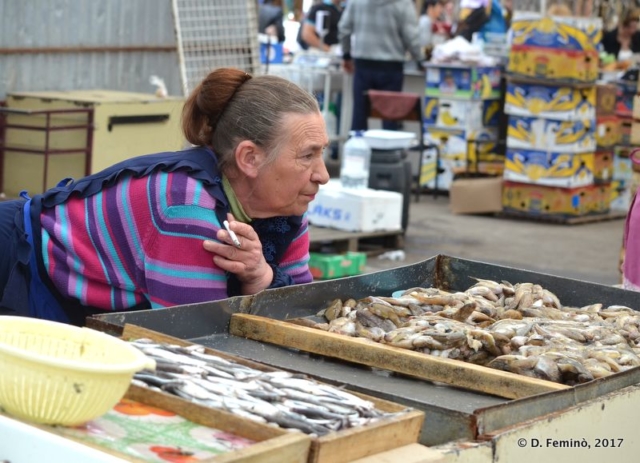 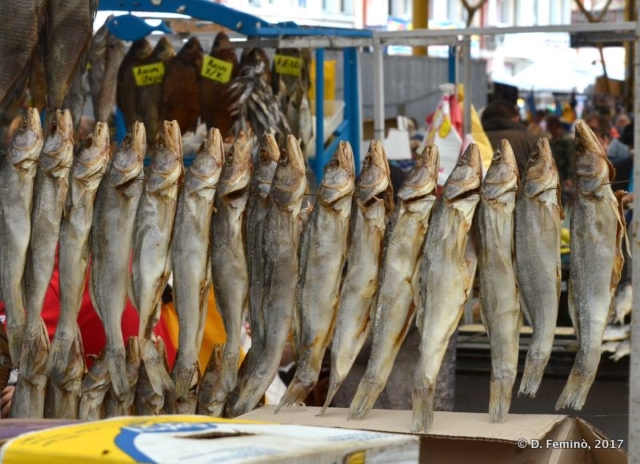 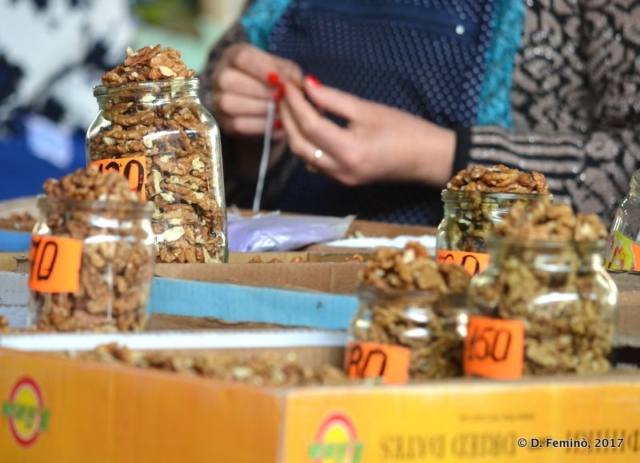 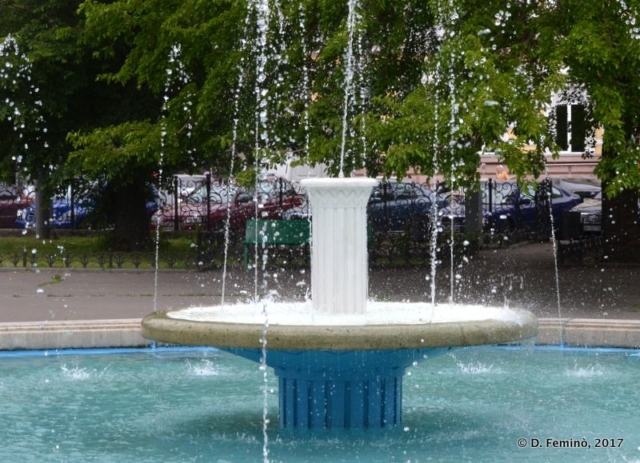 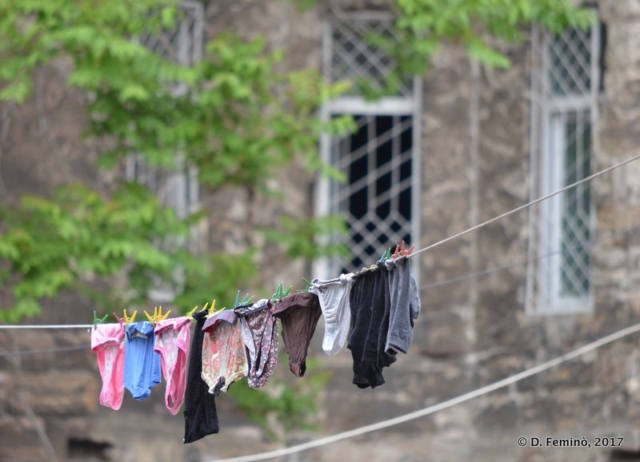 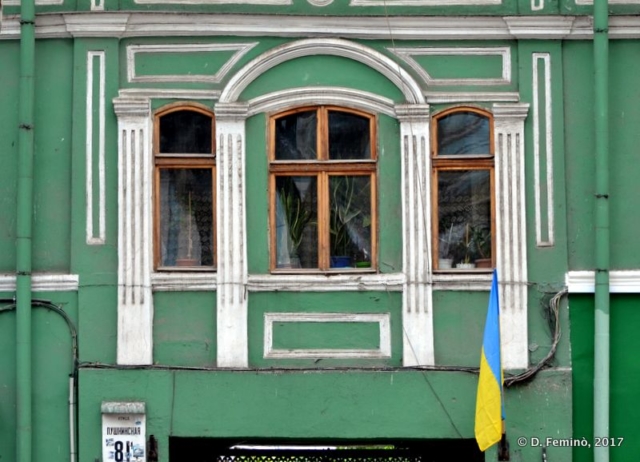 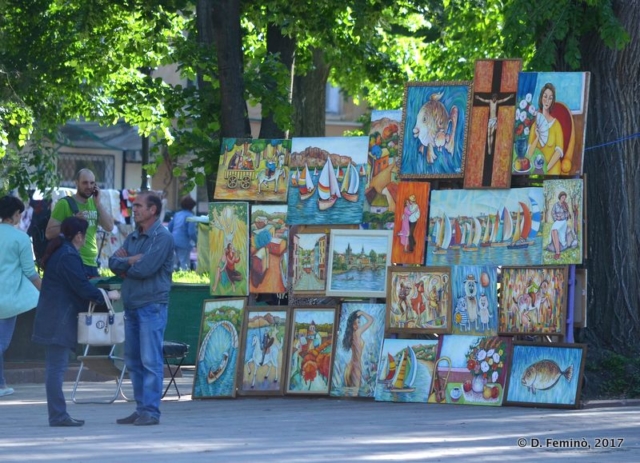 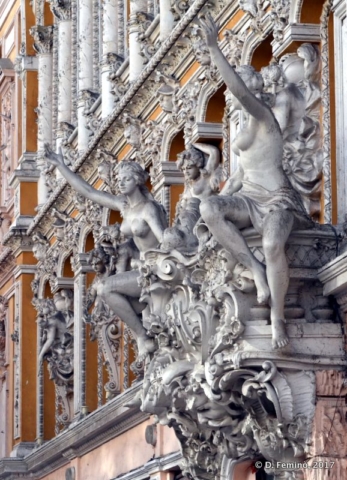 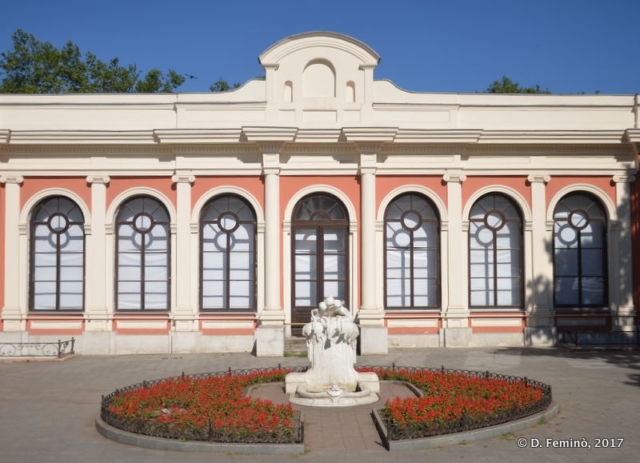 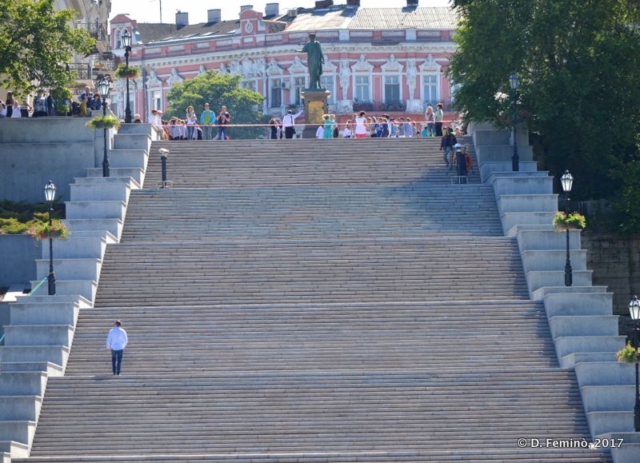 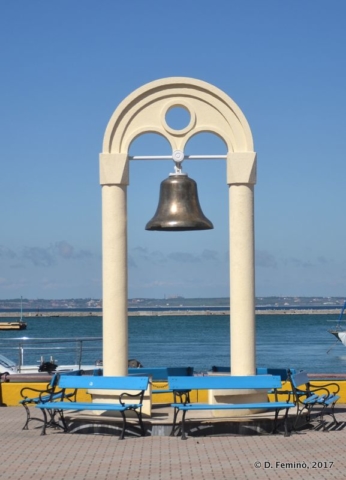 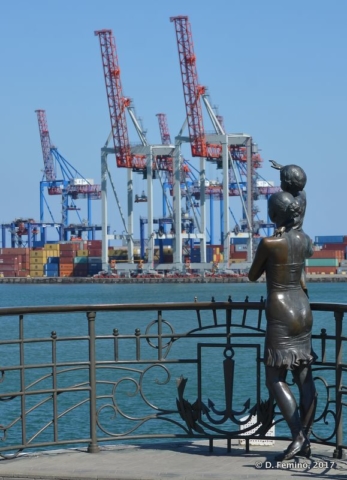 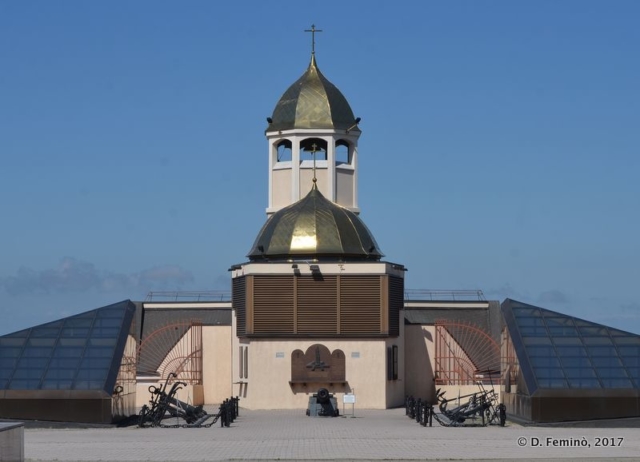 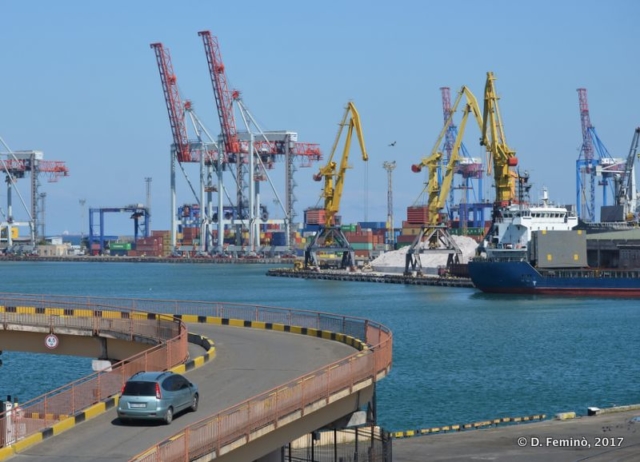 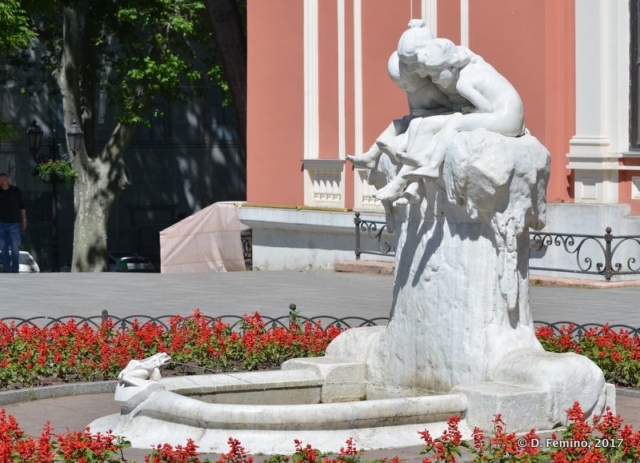 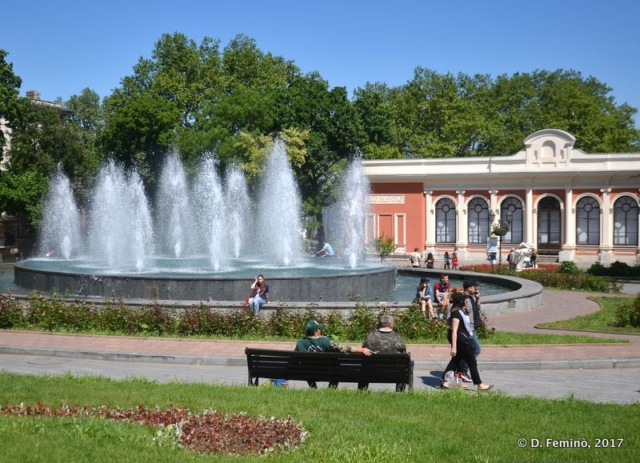 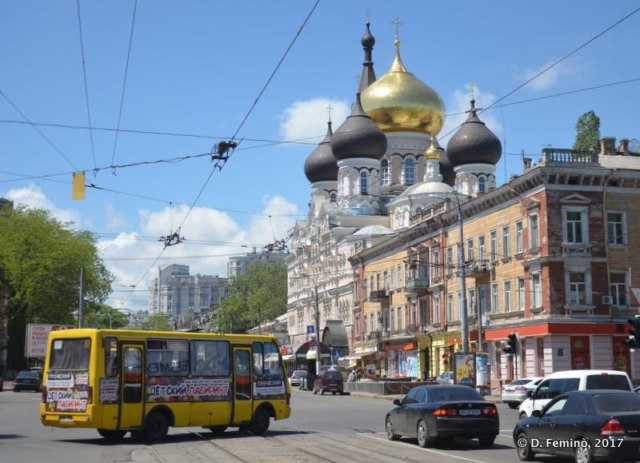 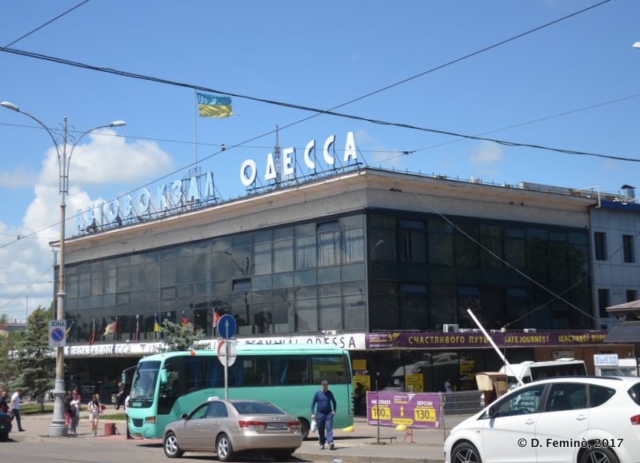 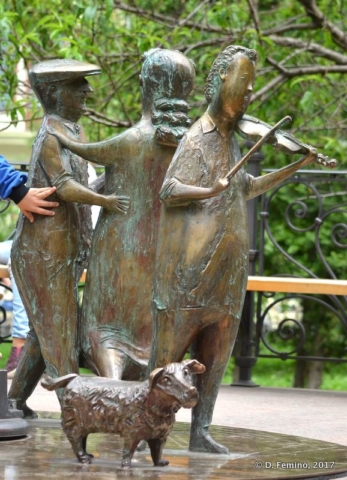 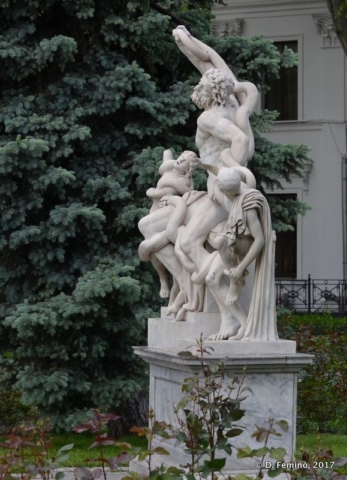 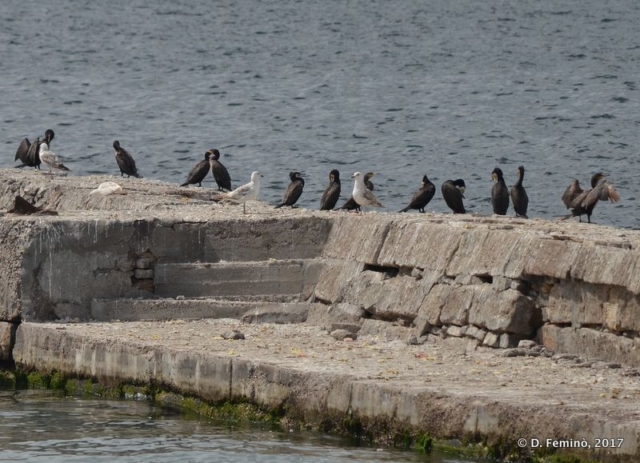 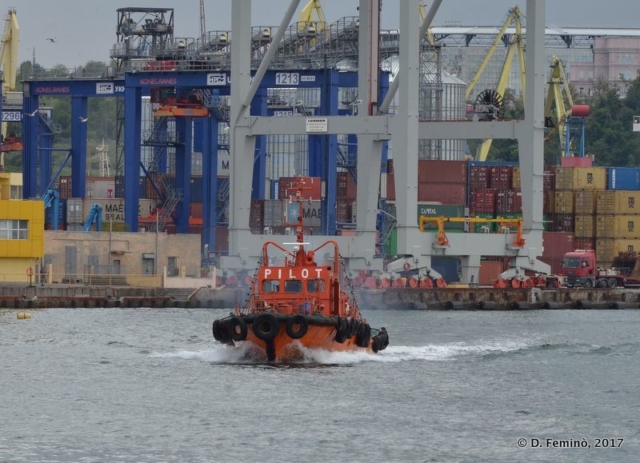 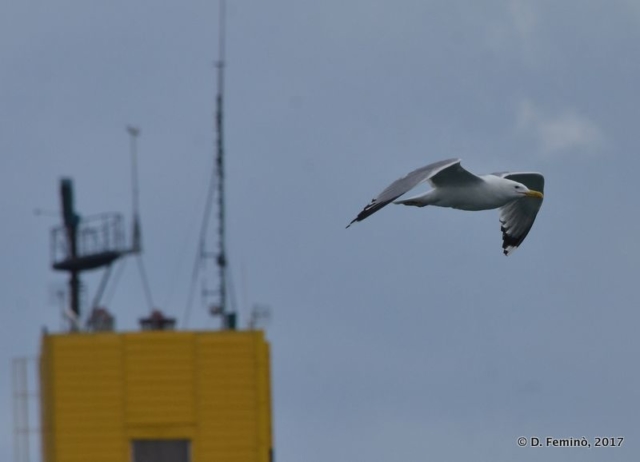 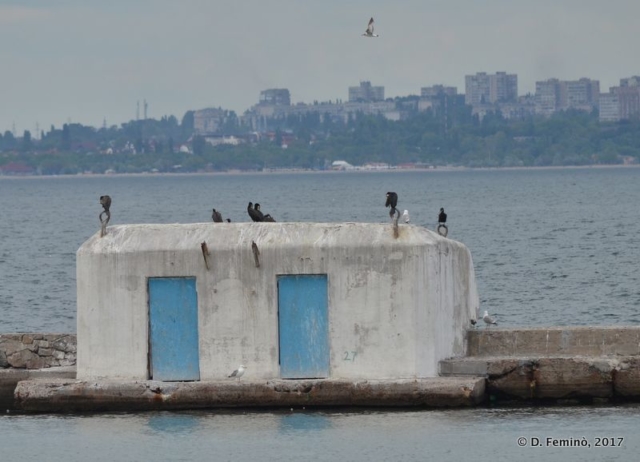 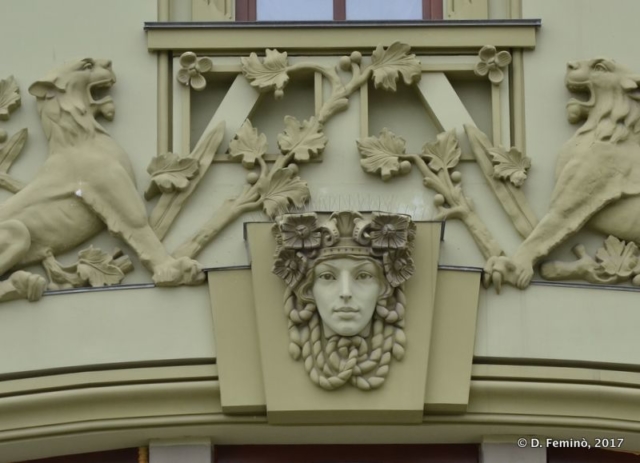 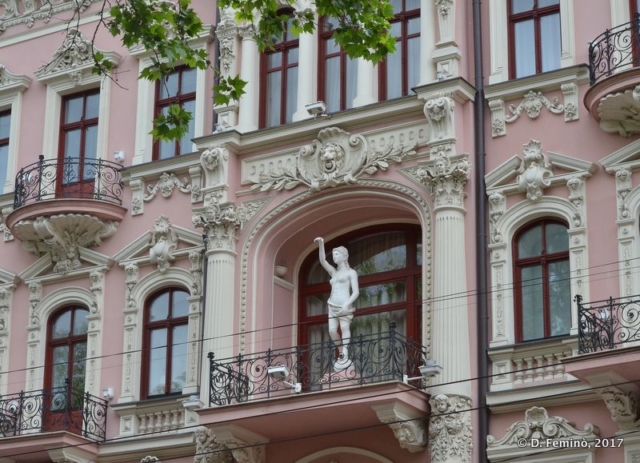