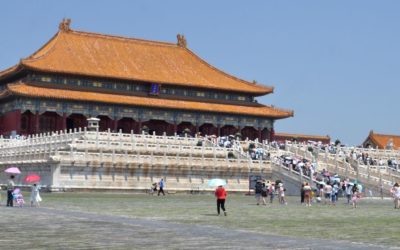 After the wonderful time spent in Beijing, a town that will always remain in my heart and where I will return one day, today I will head to Tianjin starting this way my Chinese journey that will end in the former colonies of Macau and Hong Kong.

My train doesn’t leave from the same station where I bought the ticket yesterday but from the South station: Beijingnan. I take this occasion to tell you about two Chinese words that I’ve learned: Bei and Nan that in English are North and South. Actually the name Beijing means northern capital. As you may know one of the former capitals was Nanjing that now you learned it means Southern Capital.

By the way the character for the word north is also very easy to memorize: 北. Now I’m able to recognise it anytime I see it. Ok, Chinese language lesson is over. 🙂  Southern station looks more modern than the central one. I guess this one is only for fast trains. Security checks at the entrance goes smoothly. First they check luggages as in airports, then it’s time for tickets and ID.

The station is so huge but in spite of this, thanks to clear signs and electronic displays, reaching the right track is not a problem. My train coded C2031 leaves at 9:37 AM reaching Tianjin, more than 100 kilometres far, just 35 minutes after. Ok, I’m not a newbie in taking trains but I have to say that everything is very well designed. The train is modern and the sit in second class, is comfortable.

In a short time we reach the speed of almost 300 km/h. During the short ride there are ladies checking tickets and some policeman. I’m sitting by the window and landscape outside looks like the one I saw getting out of Beijing by bus toward the Great Walls: four-lane highways, skyscrapers, bridges. However I can’t watch it so long. I’m already in Tianjin! I discover soon that the same quality of infrastructure I’ve appreciated in Beijing is also here. Well, it should be said I’m not in a remote village.

Tianjin is one of the biggest town in China having more than 6 millions inhabitants only within the urban boundaries. Metro network has at least five lines but since one is numbered #9, they’re obviously extending it. I take line #3 and then #1 to reach my hotel but I arrived there it comes out I’m in another branch of the same chain. Girl at the reception even if she doesn’t speak english is so nice to call for me a taxi and even deal with the driver the fee. After a break, it’s almost 1:00 PM when I’m ready to get out and start visiting the town.

Food streets are not all the same.

When I get out I realize that it is a very hot day with a temperature higher than 40° Celsius. In the hotel I’ve tried to plan my visit so now I know I will go in the direction of the

former Italian Concession, I will tell you about it later, that is located about two kilometres from the hotel but on the way I want to stop at the Nanshi Food Street. The memories of Wangfujing Market and the day spent yesterday in Beijing are still fresh and I hope to find something similar also here.

It would be perfect because I’m quite hungry therefore my disappointment is great when I find out that the street is actually a kind of mall and that is also almost empty. No stalls with fresh food, no small restaurants. The best depiction of the place is in the picture I took with a waiter behind the window of an almost empty restaurant with a fly swatter in her hand staring into space. In the end the only food I buy is a kind of black sugar ginger cubes, in Chinese it should be 黑糖姜母砖块. I’m not even sure that they should eaten raw as I’m doing but ok, I do not argue, I’m too hungry. Probably due to the hot weather, streets are pretty deserted but I usually do not suffer too much for it and so, quite quickly, I reach what it seems to be the historical centre of the town.

In the first half of the Twentieth century, many European countries obtained concessions in Tianjin and in other Chinese towns as well.

Before, there was just some precedent for Great Britain and Portugal and in some way those countries,

with Macau and Hong Kong were also the last ones to leave China. In Tianjin there were up to eight concessions to European countries and to Japan. The Italian one was the smallest but also the last one to be returned to China in 1947. The strong presence of Europeans in Tianjin left a clear imprinting in the architecture that seems to be kept also in style of more modern buildings. The Beian bridge with its golden statues, baroque shapes and marble columns would perfectly fit over the rivers Seine or Danube as well. The river of Tianjin is called Haihe.

On the left bank of the river, before visiting the Italian Concession I have the time to stroll a bit in the small park by the river called Culture Square. The small former Italian concession area is just next to the park.

Not surprisingly here there is a great emphasis on the pair Italy-Fashion and the area features a small mall allegedly hosting Italian clothes but I didn’t find any. The style of the the district reminds me of the Italian Architecture during Fascist time. Here finally I see some Chinese tourist, taking pictures of this stylish area, stopping in Marco Polo’s square or admiring the statue of Dante Alighieri, the greatest Italian poet. I can’t deny that the area is somehow nice but in the end it doesn’t look like China to me. I still keep going around watching some nice building but what impresses me more are few red statues of a Chinese artist called Chen Wenling. I like contemporary art. It’s fun! I think now I can move further.

To reach it from the Italian district where I am now I need to walk for about 3 kilometres but I count that along the river it will be a nice stroll. I have to say that my guess was right. Along the river I keep seeing buildings in European style.

Many churches around, another clear inheritance of the concessions. There are people fishing in the river but surprisingly not using the row, but the fishing net. In such a European atmosphere the most Chinese spot is represented by the boat with dragon head cruising on the river. By the river there is also a small beach and it is so crowded that it looks like it is here that all the people missing from the street are ended.

Many bathers when they see my camera they pose for me. Finally, after about one hour I reach the wheel. It’s really impressive. Luckily not so many people waiting in queue. The Tianjin Eye is 120 meters tall and the ride lasts about 40 minutes.

View on the river and on the town is fantastic but the wheel turns very slowly and this feeling is emphasised by the fact that the capsule is very hot since the air conditioning doesn’t work well. On the way down I’m thinking about what to do after the ride on the wheel. From the top of the Eye I’ve noticed a Buddhist temple located on the left bank of the river. It is the Dabei temple. When I finally get out of here I try to visit it but unfortunately they don’t let me in. Tourists are allowed only until 5:00 PM. I have to content with the photos I’ve taken from the eye. And so now?

Ending the day in China again.

I decide to walk back to the hotel. Tianjin so far offered me European architectures and modern works as the Tianjin Eye and it is only by chance that on the way back to my hotel I end up in the Guwenhua Jie, the Ancient Cultural Street. I’m back to China.

All around here is full of colour. The district is essentially a market but built around an historical core of ancient buildings like the Yuhuang Pavilion built during Ming dynasty or the Temple of the Queen of Heaven honouring Mazu, the Chinese goddess of the sea. I really like the place even if at this time of the afternoon most of the stalls are closed or are going to close.

However I still have the chance to eat some tasty snack and to get some peculiar green tea flavoured soft drink. Walking on the side alleys I find a bizarre statue of a guy eating noodles. I have no idea why it is here. Maybe some fond customer? On one of the booth still open they sell little automatic puppets. Of course I saw similar ones elsewhere but what it’s fun here is that there are displaying all of them turned on so that they look like a sort of small army of ducks and cats. I’ve prepared a short video to show it to you.

It has been a very intense day. I moved in the morning from Beijing to Tianjin and I’ve tried to see as much as possible. I feel like I’ve lost a lot of things here. I’m sure there are more sights and interesting places but honestly the time was pretty short. Tomorrow I will leave Tianjin moving to another town. My trip in China goes on. And while waiting for a new post about next place you can take a look at pictures I’ve taken in Tianjin in the gallery here below. 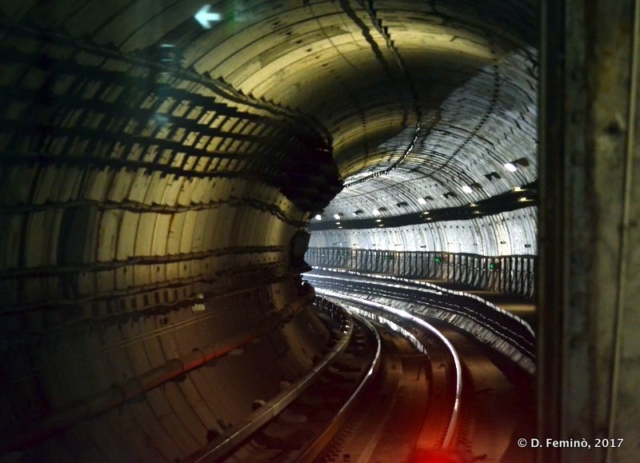 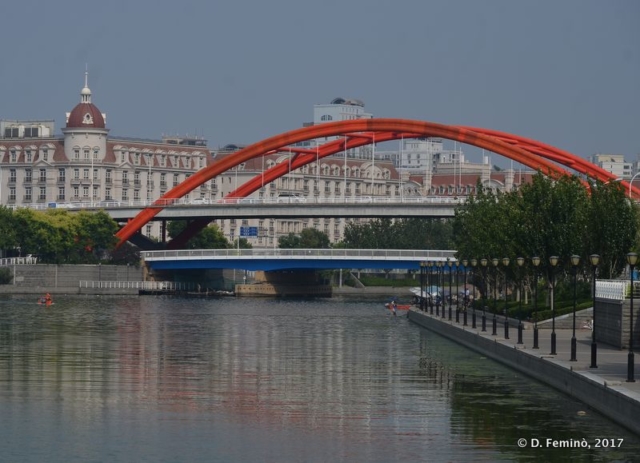 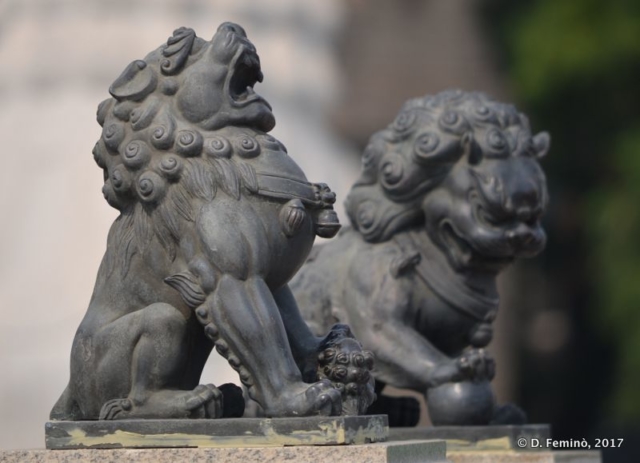 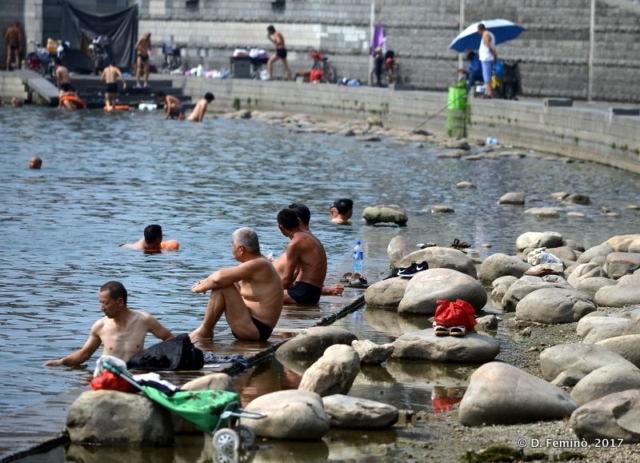 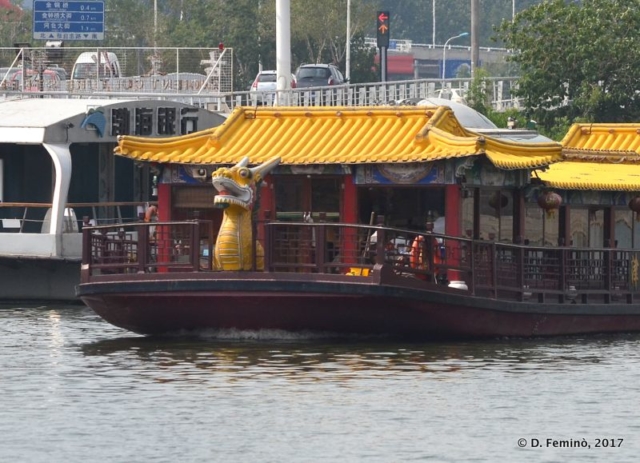 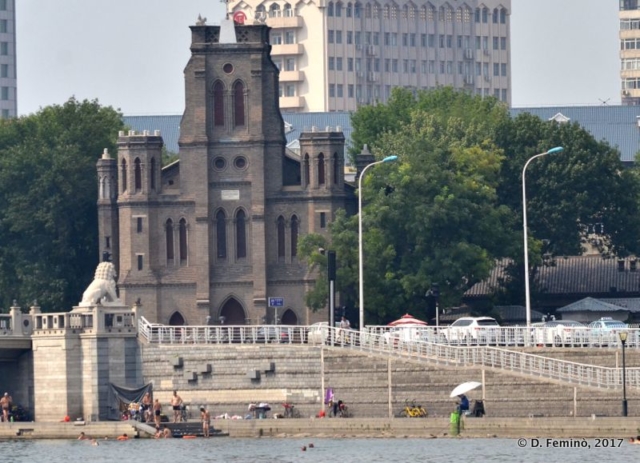 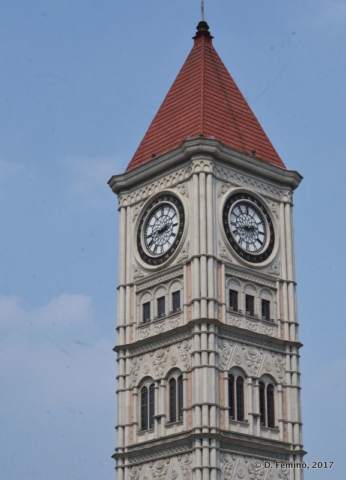 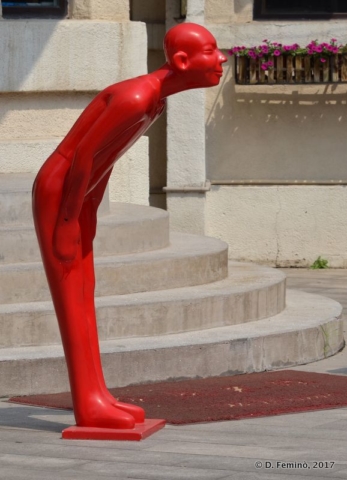 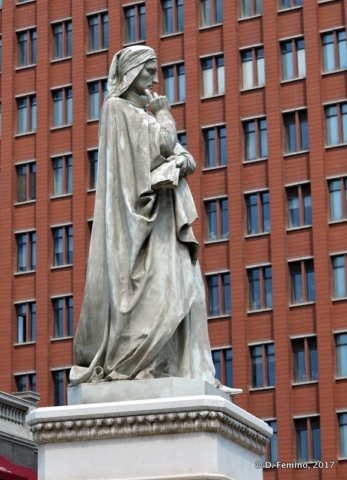 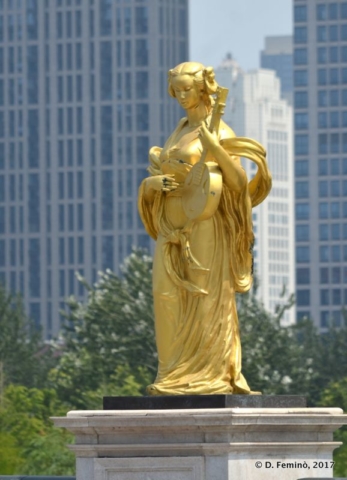