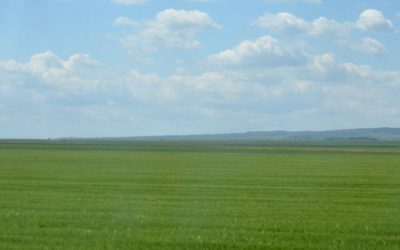 This time I need to wake me up almost when it is dawn. The bus to Ioannina leaves at 6:30 AM and this means to put the alarm clock at least one hour before due also to my almost genetic inability to prepare the luggages on the evening.
A quite hard 1,5 km. walk with the backpack until the bus station is just what you need to start well the morning. At the station I can find already many people: greek immigrants coming back home, albanese immigrants going abroad to work, old people likely going to their sons. The only tourists are me and my shadow.
In the luggage compartment of the bus, my backpack will have as unusual mates, mini-bar full of fish and big plastic bottles filled my mussels. A little wealth to be brought home.

The bus, belonging to a Greek company, leaves the station on perfect time, as a Swiss watch and while he pass in front of the fountain still sleeping, I start to think about things, maybe also because of the coffee I took before leaving home and as effect of the news coming from Macedonia.
Here, I think, as in other similar areas close to borders, population is really all and nothing at the same time. I try to better explain. They’re all Albanians but also Greeks and maybe also a but Macedonians but at the same time and because they’re too many things there are nothing and they do not belong to any specific identity. To imagine borders that are not just useful limits of administrative liability, in this area is crazy. And in the same way to someone born in Turin and living in Milan wouldn’t come to his mind to become an aggregation cell for future secession, also who’s living here must have reasonable approach. I really do hope is going to be like this because if there will be some critical situation in Kossovo or in Macedonia, Balkans will see tragic moments again.

The bus goes on the same horrible road I passed during previous days. The sky is quite dark. Some time the bus stops to board some new passenger. At one of this stop I see a cow on a side wondering whether to cross the road and when it seems to have given up, it crosses. However is not a problem. Our stop is bit longer than usual and there is no one else around.
Finally we are on the national road on the plain e from here the border is few kilometres far away.

I’m going to leave behind Albania, with its bunkers, the very kind people, the ubiquitous rubbish, all its beauty often hidden and mishandled and I’m wondering if all this country’s hopes are not depending on the awareness of the need to take care of the environment as part of the love for the country and for themselves. I heard many people saying that Albania is changing, I really hope this is true, but this feeling must just the beginning of the change not an achieved goal.
We are finally at the border control and this time it is a serious stuff especially on the Albanian side. After the check of the passports and IDs done massively, with the support of the bus driver, all luggages are taken out and checked by a single policeman and of course this task takes quite long. Once the luggages are again in the bus, we move to the Greek side. Here we need to get out of the bus again, to cross the document check one by one and then wait for the bus until all the bureaucratic procedures, who knows what, are completed. It takes at least 30 minutes but then finally we are in Greece.

Once we are in bus again, I take a look at the GPS map that reports Ioannina 40 kilometres far. The road seems good and I don’t understand why the bus should take about 1,5 hour to get there since the expected arrival time is 11:30 AM. Well, to get the answer is enough to look again at the phone. Time is changed. I’ve forgot that Greece has a different time. I’ve crossed my first timezone and saved one hour of trip.
Following this change I start to think about other things I’ve seen changing during the trip so far. Looking outside I see the greek alphabet, and this is the third one, together with Latin and Serbian Cyrillic. Currencies I had four, Euro in Greece, Italy and Montenegro and then Bosnia Mark, Albanian Lek and Croatian Kuna. More languages, currencies, timezone and alphabets are coming.

It is nice to come back to Ioannina after nine years. The town, maybe because today is Sunday and furthermore, day before the 1st of May, is full of people. It is hard to resist to the joie de vivre that seems to possess Greek people in spite of the financial issues. After a little rest I start to walk around. This city, for what it regards the monuments, is strongly influenced by the period of Turkish domination.

The nicest part is the castle with the city landmark: the Ali Pasha mosque. Ali Pasha, known also as the lion of Ioannina is buried here, near the mosque and his tomb is under a sort of huge bird cage in wrought iron. There are few tourists. People around are mostly locals.

Other than the castle, there is another area that I like in Ioannina and it is the lakeside boulevard. Lake is unquiet as I remember it from the other time. From here there are boats going to the island called Nissi, a Greek word that means… island. I’ve been there last time, it is a nice place visited mainly to go to eat to one of the local restaurants serving as specialties: turtles (!), eels and frogs. They say here that local frogs are exported even to France. Since I’ve been already there and I’m not eager of frogs this time, I skip the boat trip. It is very hot and I would like to drink a beer in the centre. The evening goes away this way, with the laziness of the Sunday evening and some grilled meat, drinking Retsina and relaxing. Tomorrow another transfer then two days in Thessaloniki.
Here is the usual gallery with Ioannina pictures. 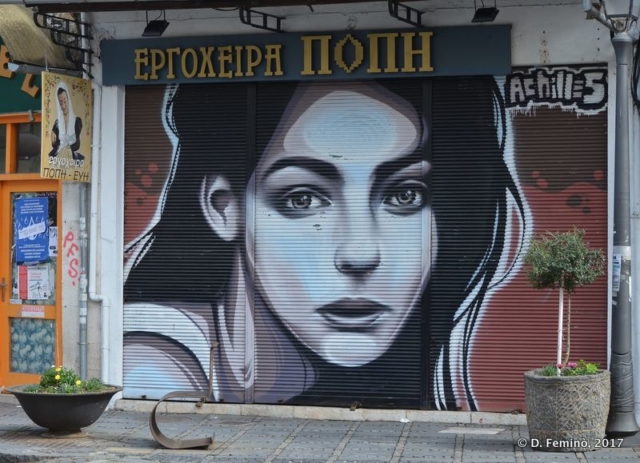 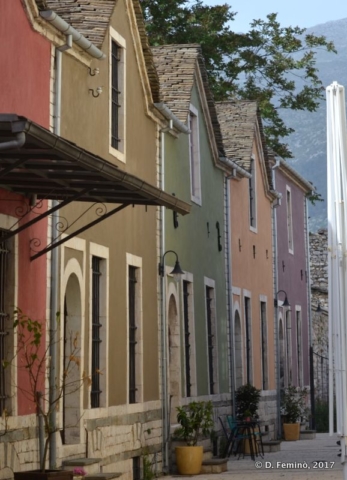 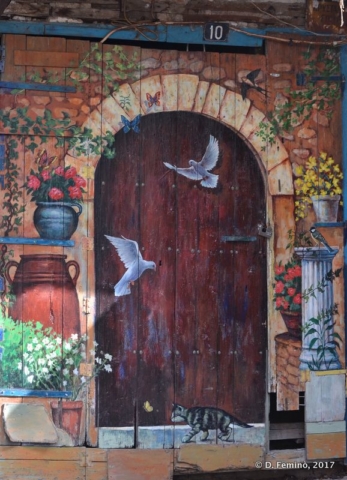 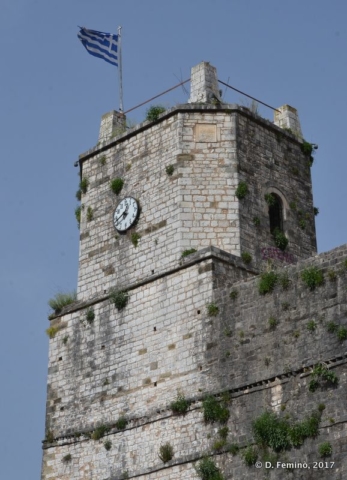 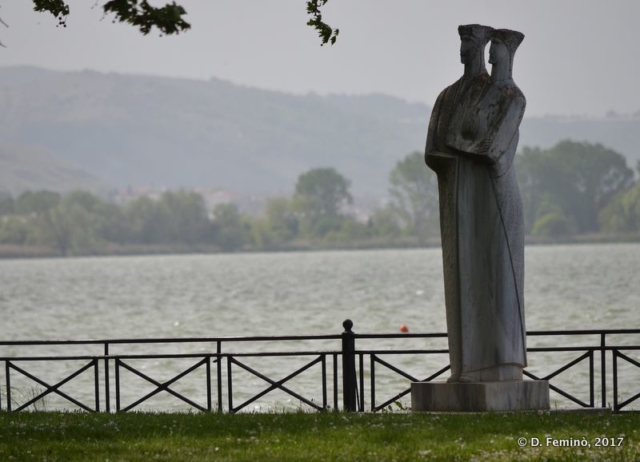 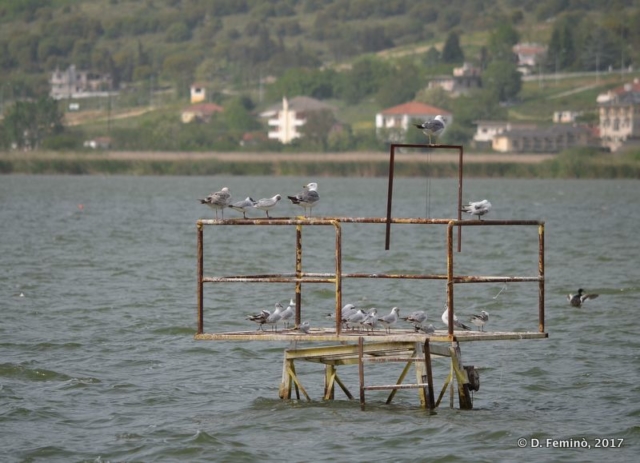 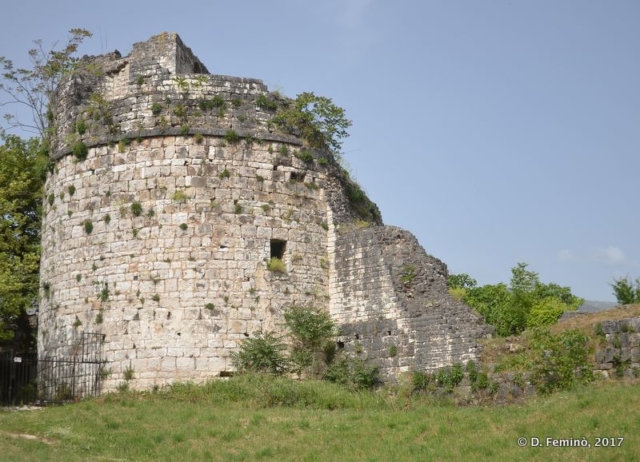 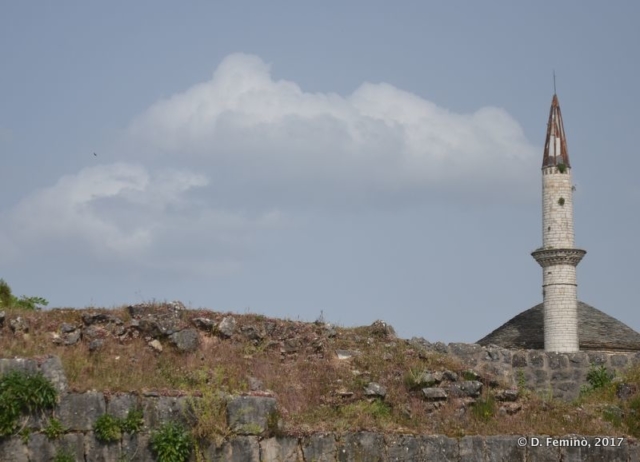 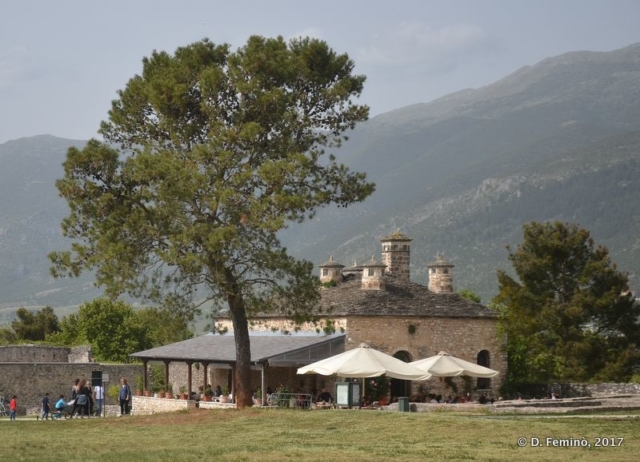 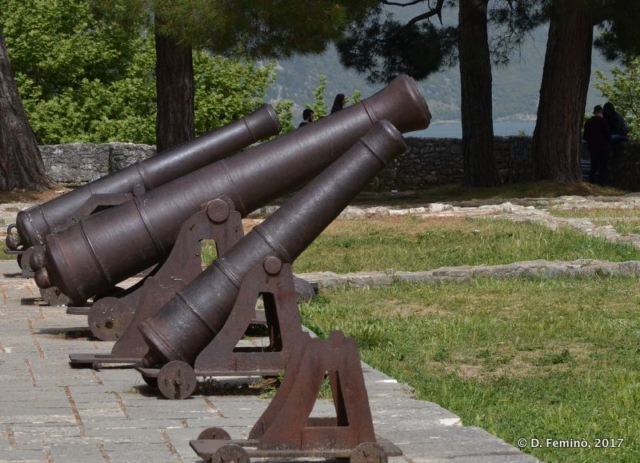