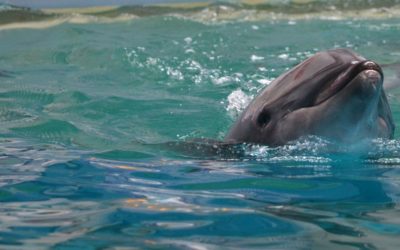 Act I: The missing bus.

After having a nice breakfast in one of the cafes in Alexandroupoli, I arrive at the station half an hour before the scheduled time of my bus to Haskovo in Bulgaria. Since I have time I sit for 15-20 minutes in the waiting room of the station, seeing all buses in front of me through the big window. It should be said that the bus station in Alexandroupoli is not a proper one, is just an office with buses parking in front. Around 11:20 there is a big concentration of greek buses that creates a sort of wall then I decide to wait outside and I start to ask about my bus but none seems to know anything. Eventually someone tells me that is going to be a mini van and that it will arrive soon but after one minute another person tells me the bus is already gone. To be honest I seriously doubt it ever came or at least it stopped. However now it is 11:30 ‘o clock and I don’t know anymore how to reach Bulgaria.

An employee of the bus station tries to help me putting me and my luggages on a bus that goes to Orestiada. Where? To Orestiada. Ok, fine, but I have to admit that I don’t have any idea about where it is. Luckily wifi on the bus is working even if it a bit unstable and I can check. So, now I know that Orestiada is still in Greece but not far from borders with Turkey and Bulgaria. For sake of clarity I have to say that the border with Bulgaria is not the one I had to cross with the bus I’ve lost. I’m trying to keep my anger under control and to evaluate all possible options. The best would be to find in Orestiada some international bus going to Sofia or Plovdiv, since Haskovo is more or less on that direction.

However I’m afraid this is not a real possibility because in that case, at the bus station, they would have told me. Another possibility would be to find the way to reach Svilengrad, the first Bulgarian town after the border and from there take a bus. I also started considering skip Haskovo and going instead to Burgas one day in advance or, as an alternative, to Edirne in Turkey. In a village called Soufli, we stop and they ask me to get down with my luggages. The bus assistant talks to the guy of the local travel agency and I hope that they’re finding a solution but no luck. Back to the bus. Furthermore the road is much longer than I thought. It is already two hours that we left Alexandroupoli. It seems is going to be a long and complicate day. The road goes along the Turkish border, in some case very close to it. However I’m not taking care so much at the landscape outside, I just notice a fighter used as a monument in Didymoteicho. Sometime the bus assistant talks to his phone and I hope he’s trying to find a solution for me. I’m relying too much on this guy since he leaves the bus few kilometres before Orestiada without telling me anything.

Act III: Getting closer to the border.

When we finally arrive in Orestiada I understand that the only thing to do is to reach Ormenio, the border town on greek side.

There is a bus leaving to Ormenio in 45 minutes but they advise me that I will not able to find any taxi or other mean of transport bringing me from Ormenio to Svilengrad in Bulgaria.

Meanwhile, using the wifi at the bus station, I see that from Svilengrad there is a bus to Haskovo leaving at 17:15. In Orestiada there is a old lady speaking a bit of German that wants to help me at any cost in reaching Ormenio. Actually I don’t speak German and how to get to Ormenio is the only thing that I know but ok, it is very kind of her and then I smile every time she says something. From the time the bus leaves Orestiada to Ormenio until the other bus will leave Svilengrad to Haskovo there are two hours and half. Would it be enough? I’m optimistic in the beginning but I start to doubt when I see how long is the road to Ormenio. On the bus people talks at the phone, including the bus driver, and someone has ringtones like a rooster singing. I decide to get off the bus before the village, so to be already on the right road and 1 km. closer to the border that, by the way, I don’t know how far it is.

Sun is beating down and my luggages are heavy but I hope on the mercy of someone along the road that can give me a lift to the border.

This time is not like in Pelješac peninsula. In this case all the cars are surely going where I’m also headed and I just need to be taken at the border, I don’t ask for more.

There is not much traffic on this road and half of it is made of trucks. However, I can tell you by now that along the eight kilometres I did with my luggages none stopped. It was quite horrible. While I was walking I started to evaluate how much I would pay to be taken to Haskovo and this amount was constantly growing as my pain on the back was increasing. Another unpleasant thing of this adventure is that from the Greek side of the border to the Bulgarian one there are two kilometres more while in many other cases the two ‘sides’ of the border are very close. So I hoped I was finally in Bulgaria and instead I had to walk much more.

When I’m finally on the Bulgarian side, 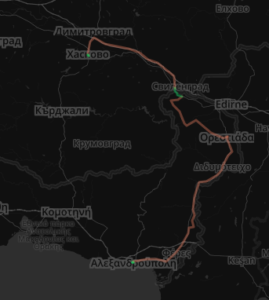 after passing the control, in the queue between the cars (a car, me, another car) it is about 5:30 PM. The bus from Svilengrad is clearly gone. I see a taxi. This one is busy but I ask the driver to find me someone that is able to bring me in Haskovo. It costed some Euro but I was really too tired to evaluate any other possibility. And so, in the end I was able to reach Haskovo and in the picture you can see the full path. Please notice the green line over the borders. It’s me walking… Haskovo is world famous town (!) because of the tallest statue of the Virgin Mary with Infant Jesus Christ as also confirmed by Guinness Book of Records. My tour of the town today lasted 15 minutes and 1 kilometres and after I went to eat and even near the hotel that, by the way, is really nice. I will explore the town better tomorrow. So, for today, no gallery… Sorry.
Goodnight.