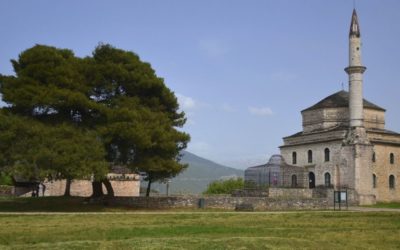 A good way to start the day.

After the horrible day I spent yesterday travelling from Greece to Bulgaria I have to admit that I’m still a bit worried about connections and bus. For today, I’m aware that there is just one bus going to Burgas and leaving at a reasonable time and I don’t want to miss it. On the other hand, since I’m in Haskovo, I don’t want to miss as well the two important sights that are this area: the church of Assumption in Uzundjovo and the tomb in Aleksandrovo.
I will try to put all the tiles together and make with them a proper mosaic. However, first of all I will have my breakfast and this is a very good way to start the day. I need to pamper myself.
After it, from the girl at the hotel’s reception I know that the bus to Burgas will leave at 13:30. This is going to be the cornerstone for building today’s plan. Now my idea is the following: a quick tour of the town since all the attractions are at walkable distance, then check-out and with luggages on to find a taxi for doing the Uzundjovo/Aleksandrovo tour. The same taxi can bring, in the end at bus station since it is not in the centre. The two mentioned villages are on the same road and Aleksandrovo that is the farthest is only 15 kilometres far so, if I hurry up, my plan should be feasible. Then, don’t waste time and let’s go.

My hotel is close to centre. Main square that is at a distance of about one kilometre has more less square shape and is quite nice. The typical main square of a small town, with some gardens and benches.

Probably the most significant thing to see is a Thracian dolmen located in the middle. There is also a great sculpture called the ”Envy” representing a figure whose wings are hold by two hands. Thanks to a public map I find out that the tourist information office is very close so I go there. The three girls working there are very helpful and they give me all hints I need to reach the two sights out of town and they even check with taxi drivers how much it would cost me the whole tour. One of the three proposes me to show me where is the Eski (Old) Mosque, the oldest one in the entire Balkan area. The mosque should be nice but is quite hard to say since it is completely surrounded by shops.

Only visible part is the minaret. It is even difficult to identify how to get in. In the end I find a door with the sign “Iman” written on it and I enter. It is the right one. The mosque is very small. Year of construction according the islamic calendar is reported over the gate with Arabic figures. You can see it in the picture, it is that “V9V” that is actually 797 in Arabic Numbers. Year 797 of Islamic Calendar is 1394-1395 or Gregorian Calendar. I have to hurry so I go quickly to another interesting part of this quiet town. Ploshtat Svoboda (Freedom square) hosts two towers.

First of all there is a modern one with a very peculiar design that was built to celebrate 1.000 years from the foundation of the town. The second one looks much older and nicer but it was recently rebuilt using as model the previous city tower that was destroyed. Modern tower is actually in the place where it was the original and its copy is only 100 meters far. Well, I know, it is quite complicate. It’s time to go to see once again the local proud: the statue of the virgin Mary and the infant Jesus. It is certified by the Guinness book of records as the world tallest. I have to say that I find it quite ugly. Much better the bell tower next to it. By the way, it seems that in this town they really care about the size. On the map provided to me at tourist office it is also mentioned the tallest flagpole of Bulgaria, also hosted in Haskovo. Now I’m again close to the hotel therefore I go immediately to take my luggages and start the second part of the morning.

After agreement with the taxi driver about the route and the price that is in line with the one estimated by the girl at tourist office, we go immediately in the direction of the first sight: the Church of Assumption in Uzundjovo. I have about two hours to complete the tour.

What moved me to see this monument is that it represents a sort of unicum since it has an hybrid architecture a mix of Islamic and Western style. Reason why is that in this location there was once a church destroyed during the rule of Ottoman Empire and replaced by a new building including a mosque and a Caravanserai. Then, when the the town of Uzundjovo was returned to Bulgaria the church was re-established using part of the existing building. The result is a this very peculiar mix of styles.

For example there are arabic written over the main gate of the church. It reminded me another quite curious building I’ve see in Karakol, Kirghizystan, few years ago. That one was a mosque built with the style of a buddhist temple belonging to Dungan people (Chinese Muslims living in former Soviet Union). Outside the church is interesting because of the presence at same time of islamic style domes and christian crosses but it is inside that offers its best. There are beautiful frescos that were restored about 10 years ago. Honestly I don’t know how much was restored and how much re-created anew but the result is absolutely beautiful. Usually I spend more time outside a monument than inside but this time it is the opposite. Great place but now let’s move forward.

Just 15 minutes drive more and we reach the Aleksandrovo tomb. As introduction I need to say that it is not possible to visit

the original tomb that is kept closed to preserve the frescos. What is the object of the visit is a nice museum (4 lev ticket) in which they created, with huge financial

support by Japanese government, a 1:1 copy of the tomb and that hosts also a lot of objects found in the area. Thracians are not exactly the best known population of the ancient times but what can be found in this museum shows the incredible level reached by their artistic skills. Artifacts date back to 4500-4000 BC, so we are talking of things built more than six thousands years ago! Quite incredible, isn’t it? And then there is of course the tomb. The setup of the copy is very well made so it’s easier to forget that it is not the original. Frescos inside are incredible. Even if not like other objects also the tomb is very old: IV century BC. In short also the museum worth a visit. Now that the tour is completed I can ask the taxi driver to bring me to bus station.

Encounters at the bus station.

After the bus station of Alexandroupoli every other bus station looks great, even this one. I’m here about one hour ahead the bus to Burgas schedule.

While I’m waiting for it I chat a bit with an Iranian guy. He tells me that he is here by 5 months and her wife lives in Italy. He spent most of his time in Bulgaria in a camp, after a long trip from Iran and he’s clearly here illegally at least for his country, since he doesn’t have the passport. He would like to join his family in Italy but he explains that his wife declared to the public authorities that she has no husband so now for him it would be difficult to reach her. I don’t know if the whole story is true but I doubt he lied, however when the bus arrives and I get my backpack for a moment I compare my hard walk done yesterday to life of him and other similar people and I stop complaining.

Trip to Burgas and first impression of the town.

Danilovgrad, Stara Zagora, Nova Zagora… Town after town, bus station after bus station, we are getting closer to Burgas but is a quite long way, almost 4 hours. Once in Burgas, to be pronounced with the stress on the “a”, from the main bus station I need to take a local bus to reach the centre.

The feeling about the town is immediately positive. I don’t see the sea but I can feel it but don’t ask me how. After check-in I try to use this late afternoon to see something and by intuition I go to the Cathedral and is a good idea because when I’m approaching the square I hear folk music. There is some sort of festival of folk groups. I cannot say they’re very good in dancing but the overall atmosphere is full of happiness especially because most of the dancing groups are composed by children. Unfortunately it is hard for me to get a good position for seeing but I take anyway a lot of pictures. Something good, I’m sure, will come out. The Cathedral, by the way, named after the saints Cyril and Methodius is a beautiful building in spite of its grey stone or it is maybe the perfect light of this hour that makes it great. I’m in that enthusiastic mood that sometime I feel when I arrive in a new place and I like it. The perfect introduction to the full day I will spend here tomorrow. For today that’s all…
Oh, yes, there is the gallery of Haskovo and Surroundings. Take a look also at the Bulgaria Album on Facebook. 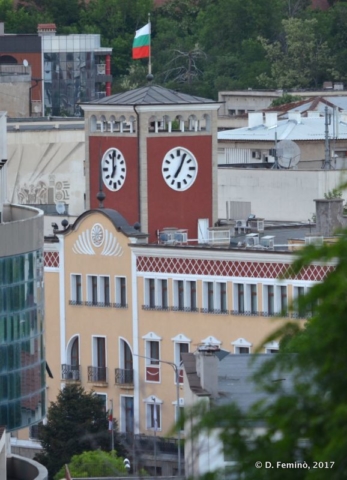 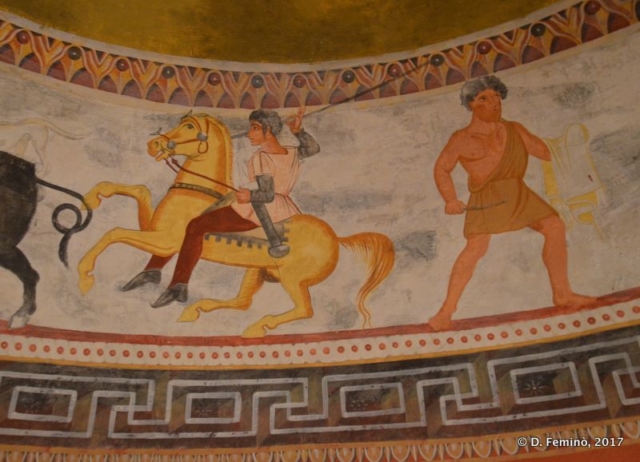 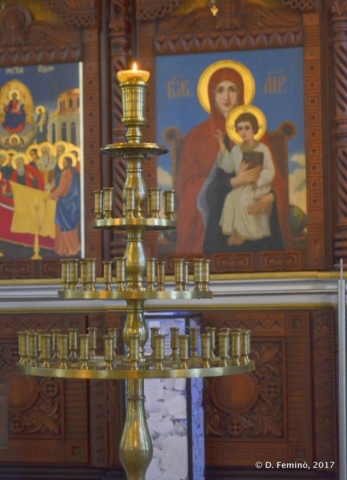 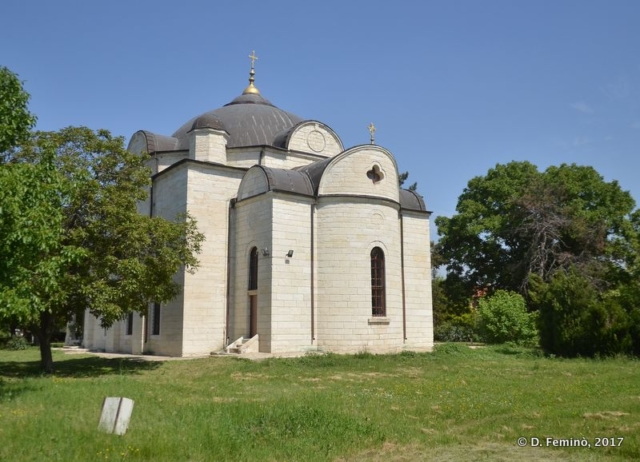 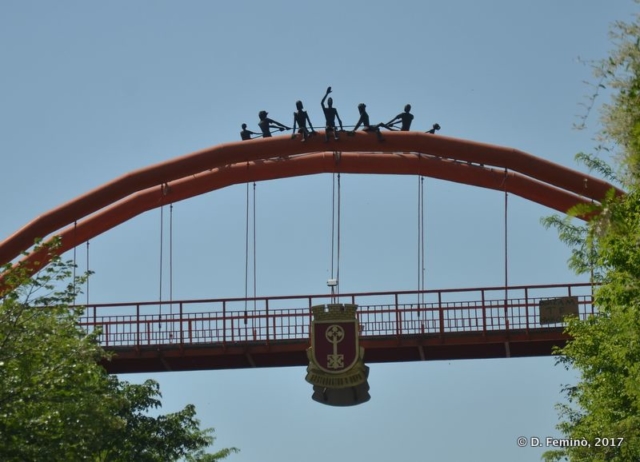 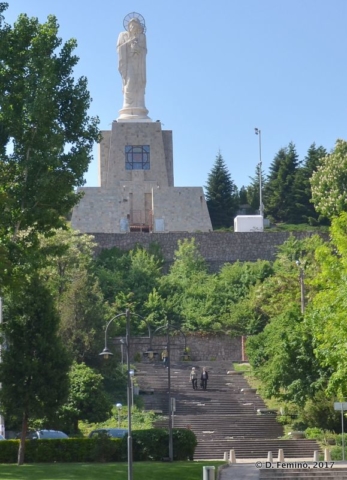 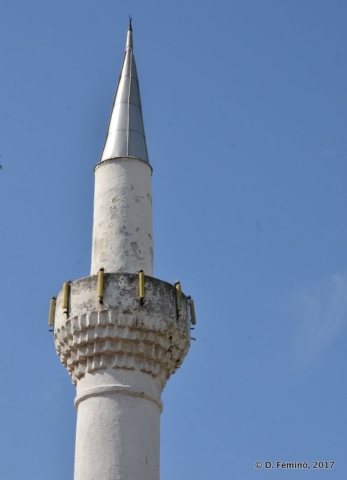 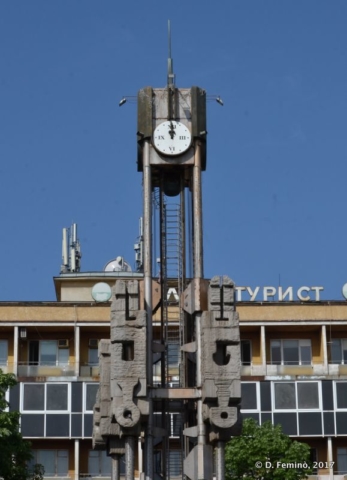 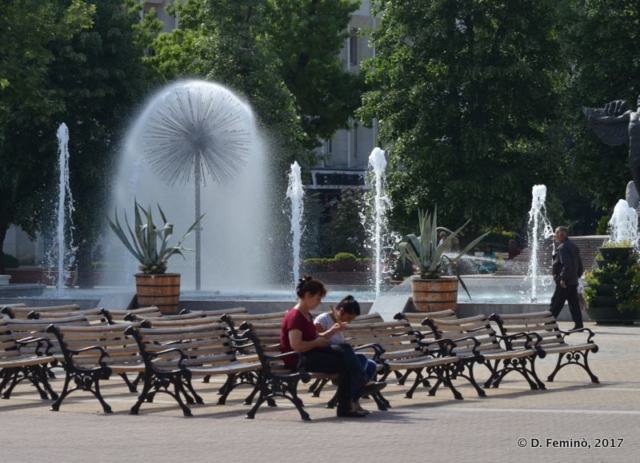 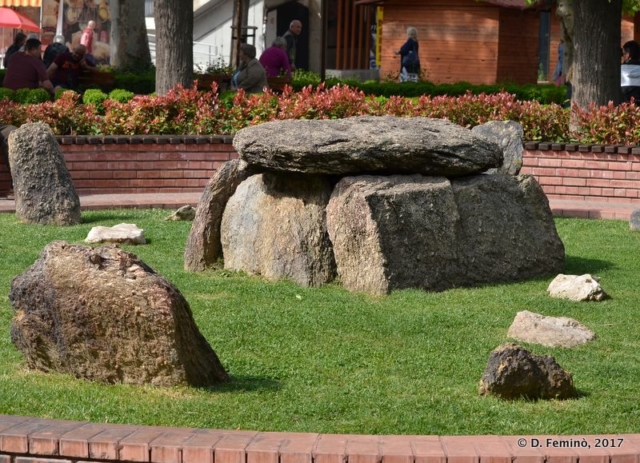