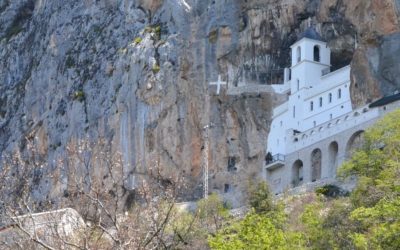 A nice stop along Trans-Siberian route.

The town of Omsk, according to several sources, is considered a town lacking in charm being just a good stop to break the very long trip along the Trans-Siberian railways. Since I didn’t read too much before planning my itinerary I decided to spend here two days. However in the end, I wasn’t disappointed at all because in my opinion Omsk is pleasant and it has a reasonable amount of things to see and do. In this post I will try to recap my impression about the town, what to see and to do based on my experience. This means of course that I could have left out something.

Railway station is south of historical centre of the town, quite far, so walking is not an option especially if,

like in my case, hotel is even further north. There are many buses leaving from the square in front of the station and taxies as well.

I took a taxi at my arrival, mainly because I liked the car, a beautiful old Volga even if this costed me more than expected. Once I had to leave Omsk, instead, I took a local bus and it was just perfect. In the end is enough to proceed all along Karl Marx prospect. The bridge on the small river Om’ marks the begin (or the end) of the centre. As usual on the bus, ticket is bought from the “conductor”, the bus attendant, making it everything easier and efficient. Ticket cost is usually around 40 rubles.

Cathedral of the Dormition of the Mother of God.

The church is one of the best I’ve seen in Russia. The golden domes joint to the pale green and salmon walls make it very photogenic especially considering that is perfectly located in the middle of the square without other buildings disturbing it. The interior is not so great but it still very nice. Photos were not allowed but the lady left me one single shot. The church is actually very recent because it was rebuilt in this century based on the original one built in XVIII century and destroyed in 1935 during Stalinist regime.
Modern statues.
As it happens with many towns in Eastern Europe also in Omsk there are many modern statues.

Actually Omsk is in Asia but to be very honest, the most Asian-looking town I saw during this trip was Kazan that is still in Europe while when you are in Yekaterinburg, Omsk and even Tobolsk, you really need to think about it to remind yourself you’re in Asia. However, let’s revert to statues. Three are the most interesting to me. One is located in a small park near the river Om’ and it depicts two lovers drinking coffee. Another one shows a plumber called Stepan getting out from a manhole. It is very, very similar to the monument called Čumil located in Bratislava. The Slovak one was released in 1997 while Stepan saw the light (!) one year later. The third one is not such great but was very surprising to me to find statue of Don Quixote in Omsk. You can see it in the below gallery.
Vrubel museum of fine arts.
One of the Russian artists that I’ve always found more interesting is Michail Vrubel. He can be considered close to the Art Nouveau movement but in my humble opinion he was one of a kind. This brief introduction is quite useless because even if he was born in Omsk,

if you like his work you should go to Moscow at the Tretyakov gallery maybe or also at the hotel Metropol where there is a fantastic mosaic made by him. Here in Omsk, in the museum named after him there is only one of his sculptures. Museum is in any case quite interesting since it hosts various items, not only paintings of Russian, Flemish, Italian and French artists but also pottery and other great pieces of decorative art. To me, most impressive is the hall hosting works of Anatoly Konenko, a very peculiar local artist. He is likely the best microminiaturist in the world. To be very clear, when you enter you are provided with a magnifying glass because you can find portrait made on an apple seed…
River Irtysh.

Omsk lays along two rivers: the small Om’ that I’ve already mentioned and the big Irtysh, the same crossing Tobolsk. Irtysh riverside is pleasantly perfect for a walk or for a run if you don’t mind too much about mosquitos or you run faster than them. Apart walking along, there is also the chance of doing some cruise on it. I didn’t since, as you should know, I usually fall asleep immediately during such kind of trip but I see long queues of locals eager to slide on powerful waters of this river that, by the way, is one of the most important in Asia, having its source in China and crossing also Kazakhstan.
Buildings on Lenin Street.
Omsk doesn’t have its own Arbat and this is quite a big news after seeing in Kazan, Yekaterinburg and Tobolsk but the street

that reminds more of that atmosphere is Lenin street in its section going down to the river Om’. There are beautiful buildings on both sides of the street with elegant shops and cafes. A bunch of crossway leaves from here with extending a bit the ‘posh’ area of Omsk. Just before the bridge there is a nice chapel on the right is the Seraphim Alekseevskaya Chapel. After the bridge there is a busy part of the town with a lot of shops and restaurants but nothing very impressive. In any case there is always the chance to find other sights of the town because they’re very well signposted.

We are in Siberia so we are still in Pelmeni area but to be honest I didn’t eat them. For lunch there are always a Pekarnya (Bakery) nearby where to get usual Samsa, Pirozhki and Cheburek so to save time for visiting the town. In the evening, the first night I went to a Ukrainian restaurant near the Cathedral.

Food wasn’t that bad even if surprisingly they didn’t have Chicken Kiev. Problem were three folk singers loudly quacking in their attempt of finding the Ukrainian way to the Balkan Turbo Folk. The incredible thing is that I also heard them singing for a moment traditional music a cappella and they were really great. What a pity. Unfortunately I was sitting facing the stage. I’ve recorded some short sample (about a minute) of the trio in the Turbo Folk version so to allow you to judge.

Second evening I wanted to eat in a Shashlyk place located on a boat on Om’ river but approaching it I heard loud music again and then I ran away finding refuge in another small restaurant serving also Shashlyk plus Khachapuri without anyone singing… Almost perfect.
It was a nice-two days visit in Omsk. After it, next destination is Novosibirsk. An eight-hours ride in the train tomorrow morning will take me there. As usual, here below there is a small Omsk photo-gallery. Other pictures are available on my Facebook page. 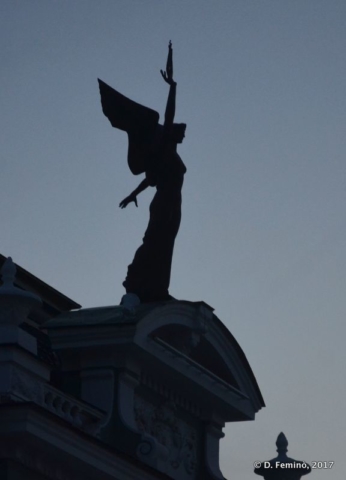 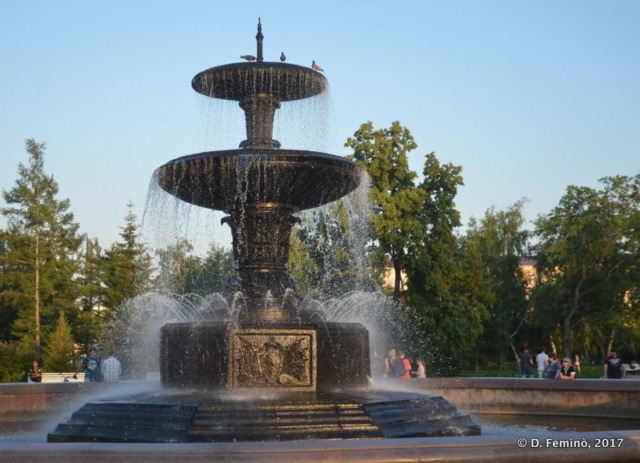 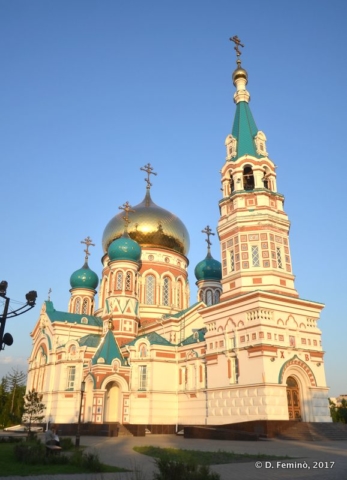 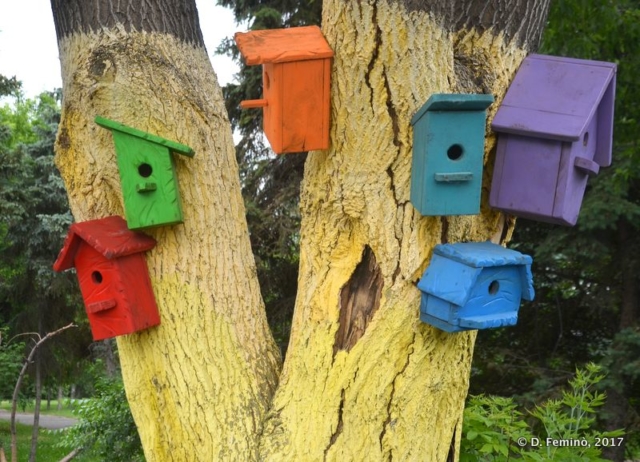 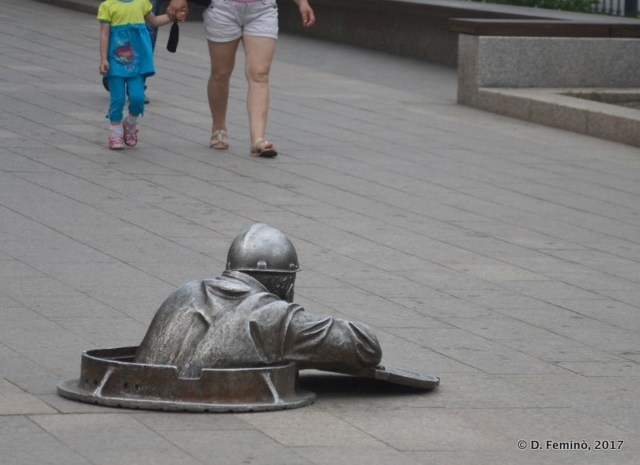 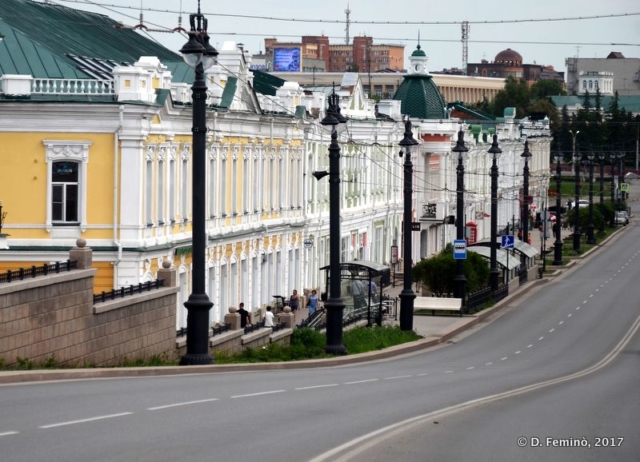 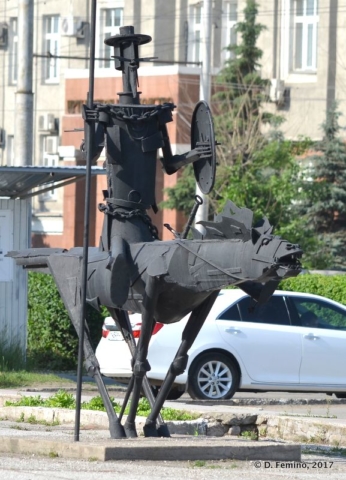 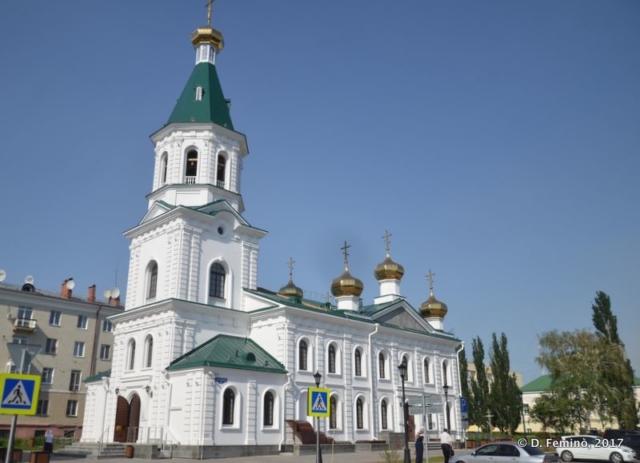 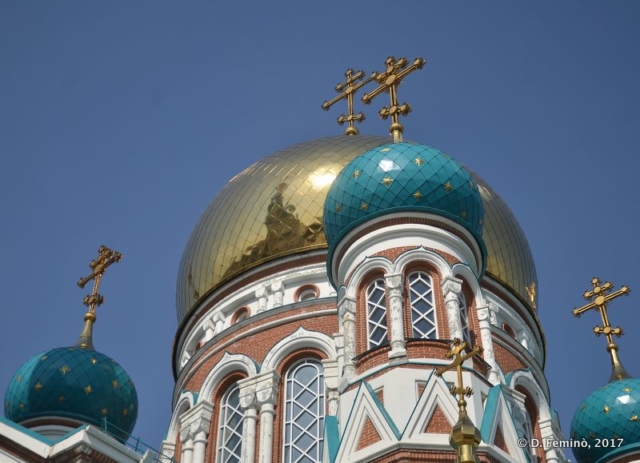 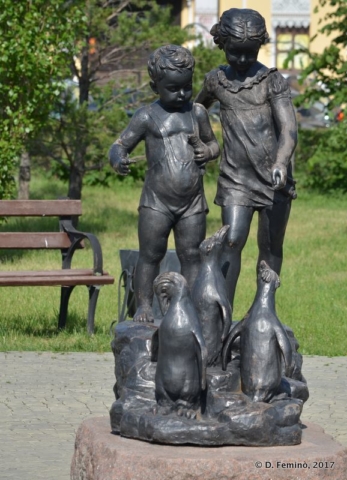