When I decided to come to Shkodër, I had in mind several possible excursion to be done during my second day, provided that I considered one day enough to visit the town. There are many places around here that can be visited in a day trip even if, in some case, this would mean waking up very early and returning back in late evening. Unfortunately even the time of long term traveller as me is limited and what I should also consider is that my energies are limited as well and that after one day of visit there will be another one, and then another one, and so on (almost) ad libitum.
All this introduction is just to explain why, of all the options, in the end, I’ve chosen what probably can be considered the easiest one. However, we can’t consider Lake Skadar as a second category choice. It is a very important resource for this area. First of all it should be said that is the biggest source of fresh water in the mediterranean area. Its surface area measures up about 500 Square Kilometres and it belongs more or less, half and half to Montenegro and Albania and it should be protected by a national park in both countries (I’m not 100% sure about it) and this makes of it an ornithological reserve.
The way to access to this place will be, for me, through the little village of Shiroka. This place with a name that sounds to me Japanese, it is described in the guides as picturesque and it is not so far from the centre of Shkodër, about 7 or 8 kilometres. It would be great if I can find some bus going there but I will think about it later. Before to go I want to see the Catholic Cathedral. When I arrive there they are celebrating the mass and I don’t want to do the stupid tourist ignoring where he is so I take just some picture outside and then I think that if I leave now for Shiroka I will be there likely in time for lunch and visualising a grilled carp in my mind I head to the lake.

I start to walk on the main street leading to the fortress and to the lake. Yesterday I saw some bus stop. There is one quite close and based on the sign next to it there should be two lines, 1 and 2, running more or less in parallel (same stops) but number 2 goes on until… Shiroka! Well, this would be great. It would but isn’t because when the bus arrives and it is the number 2 I jump in, 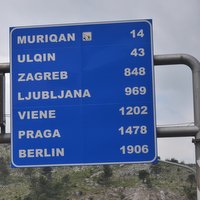 I pay the 30 Lek ticket (about 20 Euro cents) and I follow the route on my GPS, I often do that whenever I’m not sure I’m going in the right direction and at a certain moment I notice that the bus doesn’t turn where it should. 🙁
Ok, I jump out and I understand is going to be a long walk again. A very useful traffic sign informs me that I’m currently 1.202 kilometres far from Vienna, 1.478 from Prague and 1.906 from Berlin. In other words, after all we are in Europe too…
After crossed the bridge I walk by a small village inhabited by poor people but they smile and children say hello to me. I learn from a sign that Shiroka is 4 kilometres far from here. After a headland promontorio the road actually starts to follow the lakeside and the walk becomes much more pleasant. It is true that there are many birds. Unfortunately the sky that this morning was very clear now is full of dark clouds and I wouldn’t be surprise if it would start to rain soon.
I walk a little bit faster but at the same time I enjoy the view of the lake. It looks like coming in this area is a usual way to spend their Sunday for citizens of Shkodër. Most of them are on bicycles but also there are many cars, probably all headed to restaurants set along the lake side. I have already seen some of them but I’m not in Shiroka and I want to see the “picturesque village” of the guides. When I’m at about one kilometre from my destination, some raindrop starts to fall but nothing serious. When I reach Shikora rain is a bit stronger and unfortunately the first restaurant where I try to get in is full but in the next one I can finally sit by a window looking the rain that now falls more abundantly.


Lunch and then back to town.

Also the restaurant where I am is quite busy and the service not very prompt but my bad mood vanishes when I see that in the menu, other than the expected carps, they have also eels. Eel is a kind of fish I’m quite familiar being part of Neapolitan Christmas tradition and I really like. According to it, it is part of the dinner on December 24th evening. In that case it should be fried but I agree that grilled is much better because being a fat fish, this way of cooking is the more appropriate, since it melts away part of the fat. I have to say that this one, at restaurant Shkodër, is very well prepared and tasty and a local beer is the perfect way to wash it.
Finally sated, I get out of the restaurant and I happily discover that rain almost stopped so I walk a little bit around the village, finding out that actually is not that “picturesque” described by guides. In any case I’m happy to have been here because of the lakeside walk and, of course, because of the lunch. Now it’s the proper time to go back to town. While I was sitting in the restaurant I saw a local bus passing in the direction of Shkodër so I’m walking often turning around to see if it arrives again. No way… Ok, another long walk. At least this time, it will be a bit shorter because in the poor village there is a perfectly fitting pedestrian bridge that cross the last tongue of the lake a bit closer to the town. The sky is very cloudy now and after walking more than 15 kilometres in total since this morning, I’m tired so I close the exploring part of the day and I get back to the hotel. In the evening, a passable pizza makes my dinner.
Here following the gallery of the two days in this area. 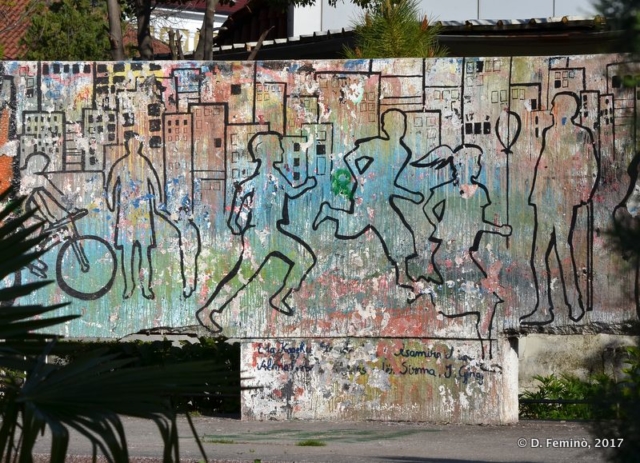 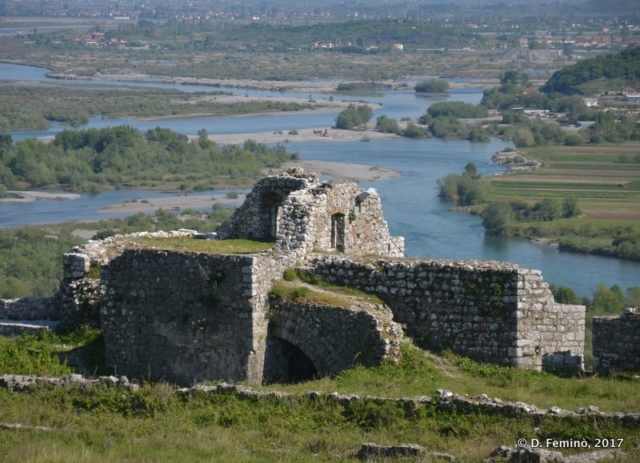 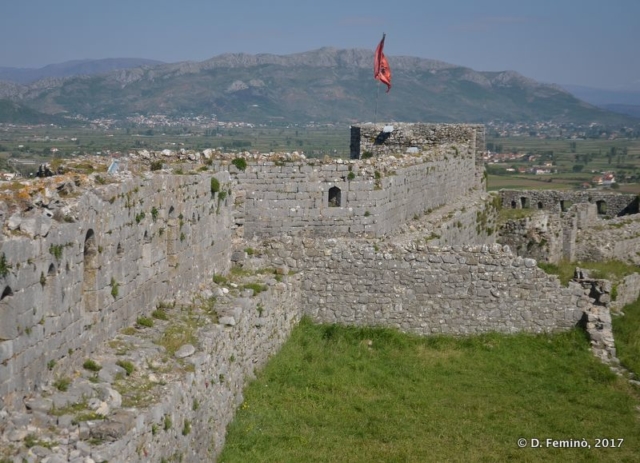 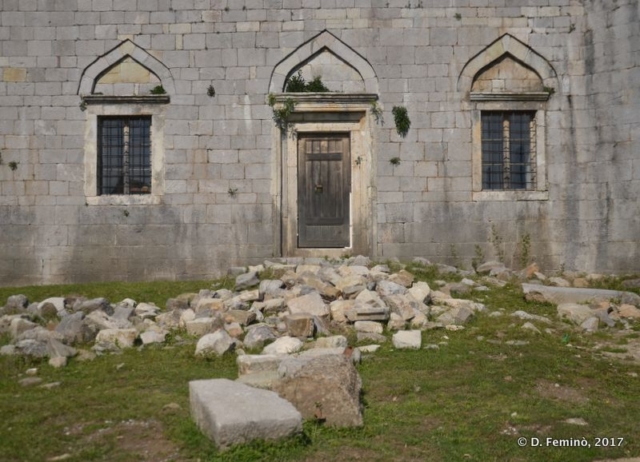 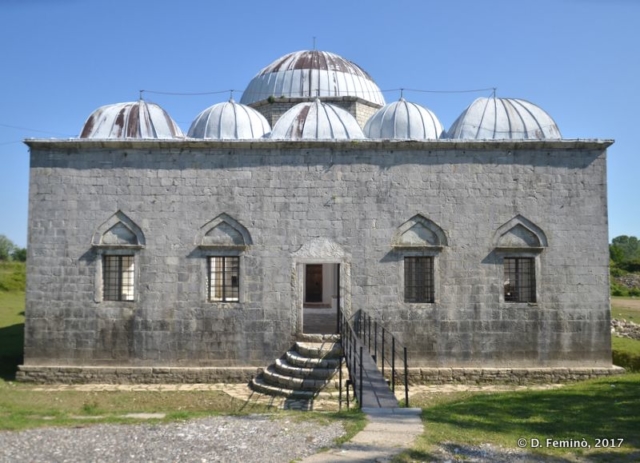 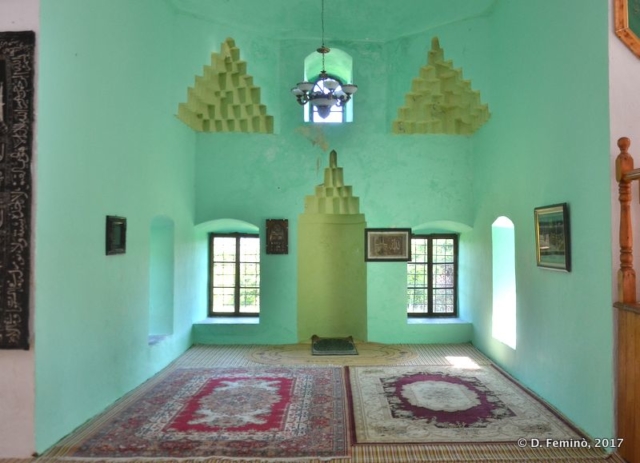 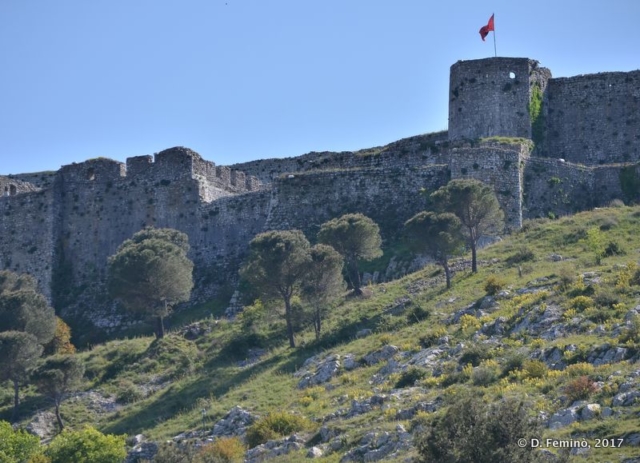 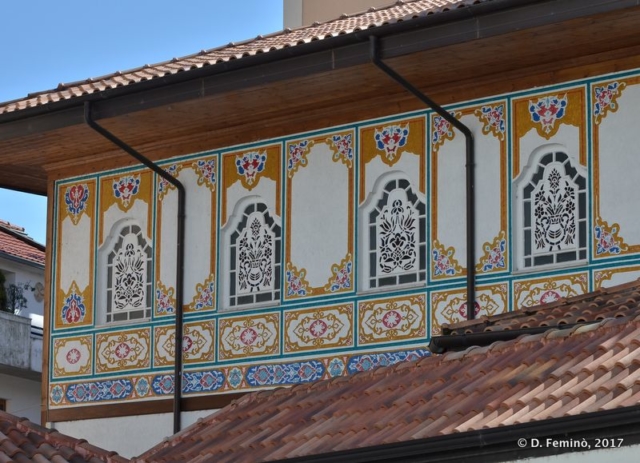 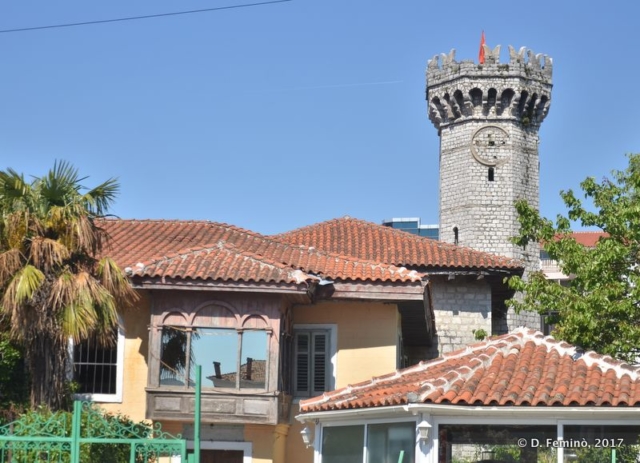 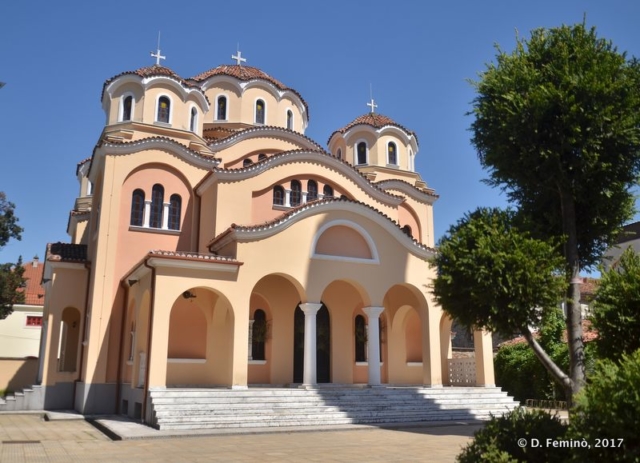 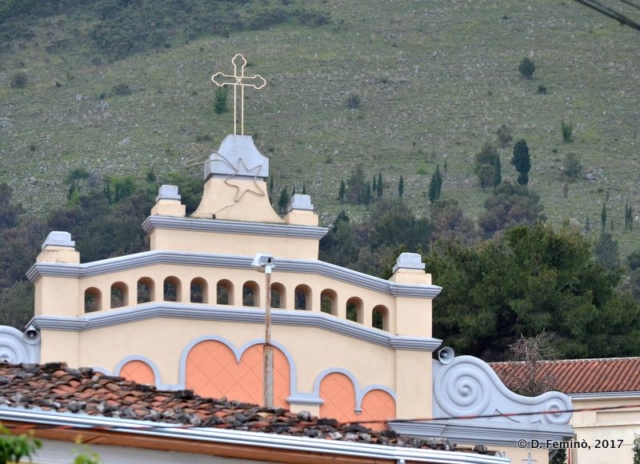 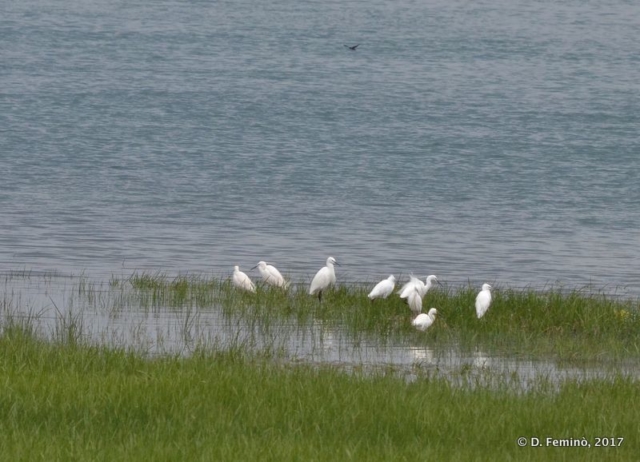 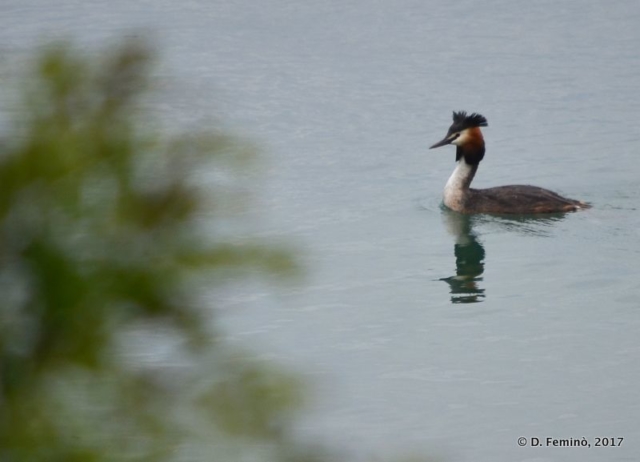 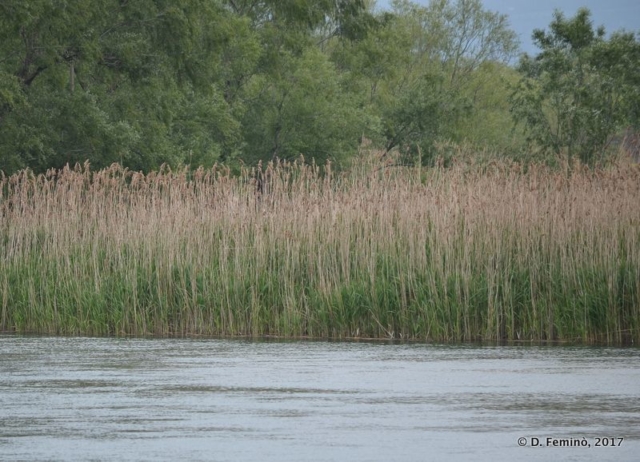 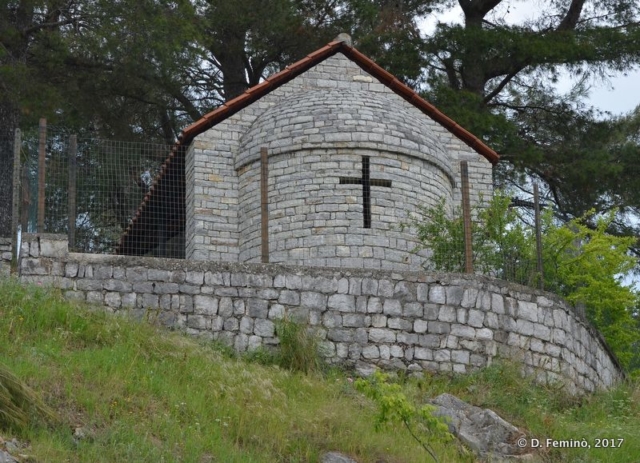 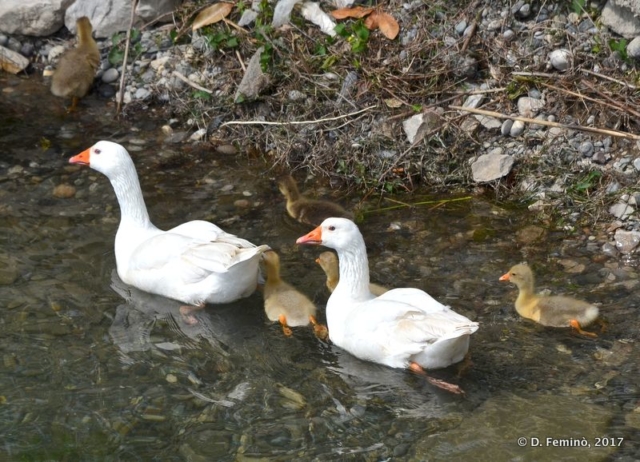 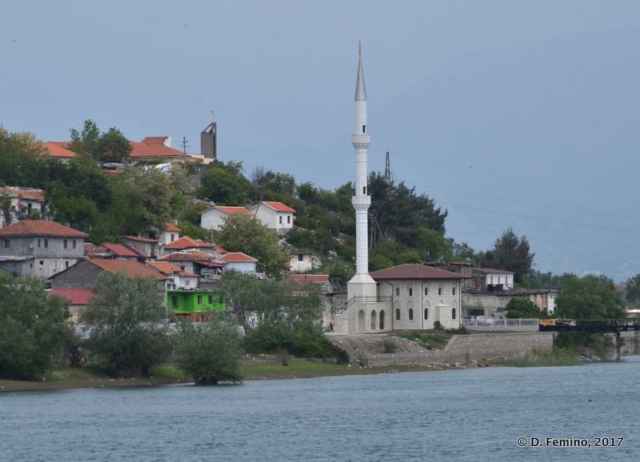 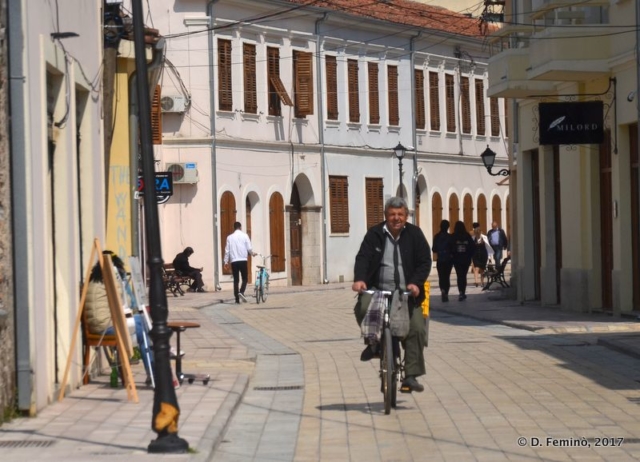 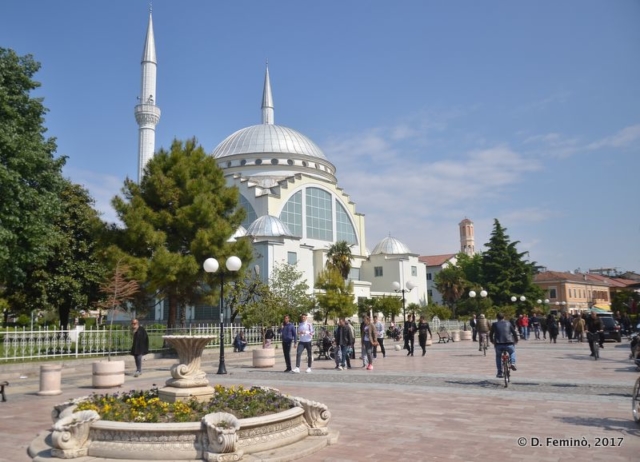