Dreaming of a spaceport in the desert

Have you ever visited a spaceport? I’ve never visited neither Cape Canaveral, neither Baykonur and, to be precise, I don’t even know if the definition of “spaceport” can be applicable to those places since, as far as I know, starships can only leave but not land back. Nowadays, I’m afraid that if we would like to visit a spaceport we need to rely on dreams or its representation: movies!
If we talk of science fiction, the most successful saga ever is surely Star Wars and, as you may know, in some case, film locations were in Tunisia. This beautiful country gave also the name to one desert planet in the story. Tatooine comes after Tataouine, a town in Southern Tunisia, also a location for some scenes. If Tatooine, in the plot, is a desert planet, I’m close to real desert. Actually the most legendary one: the Sahara.
But before telling you about the spaceport, as in the best movies, let’s do a flashback.

It is 2013, April. I had already the incredible pleasure of visiting Tunisia past year in October, but due to lack of time, I had the chance to visit only the northern part of the country. I was so amazed by the landscapes, the people and the culture that after about six months I’ve decided to come back to explore the southern part, reaching also the desert.
I read something about filming locations of Star Wars in Tunisia and I know there is a very nice one close to the next town I’m going to visit that is Nefta but, for the moment, I didn’t plan any visit because the place seems to be hard to reach as a single traveler, because located in the middle of the desert. Main attraction in Nefta is the so-called corbeille (basket in french): a beautiful and peculiar garden. I will tell you something about it, sooner or later.
I usually visit sites on my own but this time, I was convinced by a local guide, to rely on his help and it is a good idea. After visiting the garden and the centre of the town, we kept talking (he speaks French as most of the old people in Tunisia) and I mentioned the Star Wars site regretting having a small car not allowing to reach it. He says that a four-wheels is not needed and proposes me to bring me there for just few more dinars. This is the reason why, now I can tell you about my…

From the town of Nefta to the location there is just desert, desert and sand, sand and camels. You can see the gps track of my day (I left from Tozeur) in the small image on the left side. 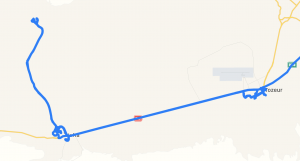 However, my guide was right and we are going on the road without having the minimum problem. The man explains me that who’s arranging the visit to this place is emphasizing the difficulties to better sell their visits and sometime, 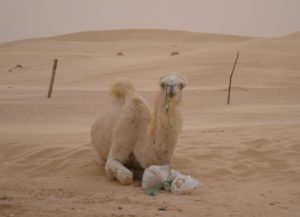 A camel in the desert near Nefta (Tunisia, 2013)to proof that is hard they go off-road but, going along the road (there is a road under the sand, sometime I see it…) it is everything smooth. The trip is not too long, about 20-30 minutes with great view of the dunes and camels, some just resting as the one in the pic. Only the last 800 meters are off-road but the sand is well beaten by buses like the two that are leaving now, letting me alone in my Star Wars dream.

The atmosphere is very peculiar. There is a kind of sand storm that makes everything very uniform. Even the only camel on the site is hard to see. The awareness of being in an artificial filming location leaves immediately space to the feeling of visiting an abandoned site of some alien civilizations. 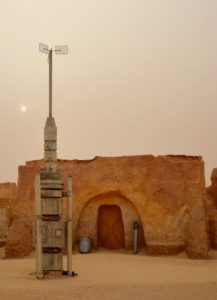 I’m alone and free to go around without limitation. I didn’t have the feeling there was anyone monitoring the site. The science-fiction fan in me, made think as an archeologist trying to understand the real usage of the buildings I see. To be honest, ignoring the doors and other few details, houses and buildings doesn’t seem so alienish but everything is made fascinating by the light. The sun that, behind the sand that fills the sky, looks like is belonging to another solar system and, of course, the weird items spread all over the site, like the one you can see, here at right, makes the feeling stronger. The entire site is not so big so, I don’t think I’ve spent a lot of time here but I can’t tell really, because time runs differently here, at least for me. I’m afraid that instead is running normally for my guide waiting for me in the car so, when I wake up from my dream, I run to him. On my way back, I leave him in Nefta and I go to Tozeur really satisfied by this visit. If you go in that area, try to visit the place, also because I read that is endangered by sand dunes. If you can’t, take a look at my pictures below. 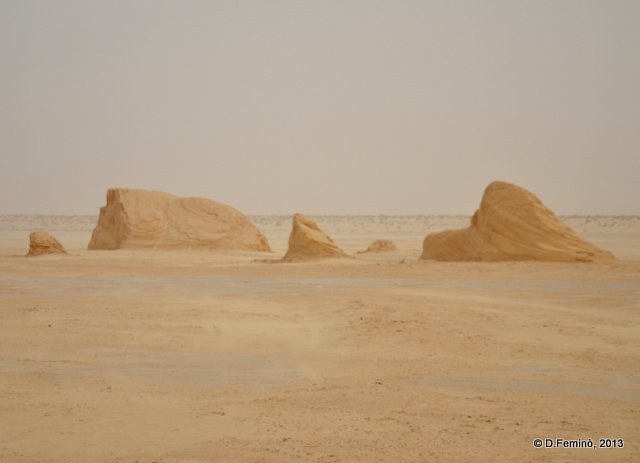 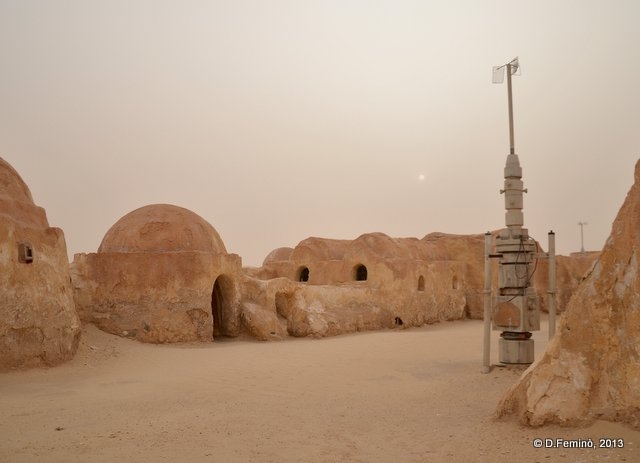 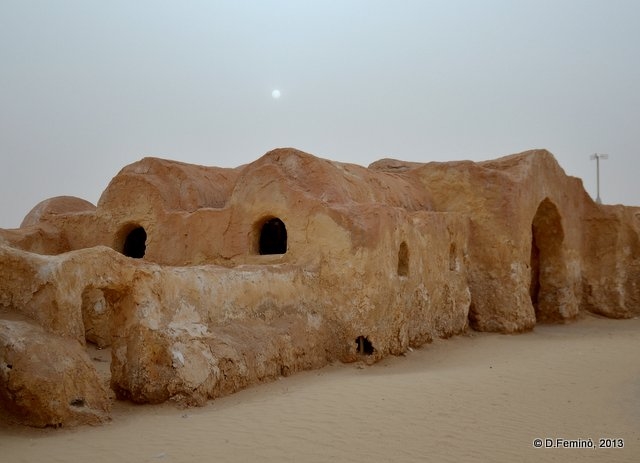 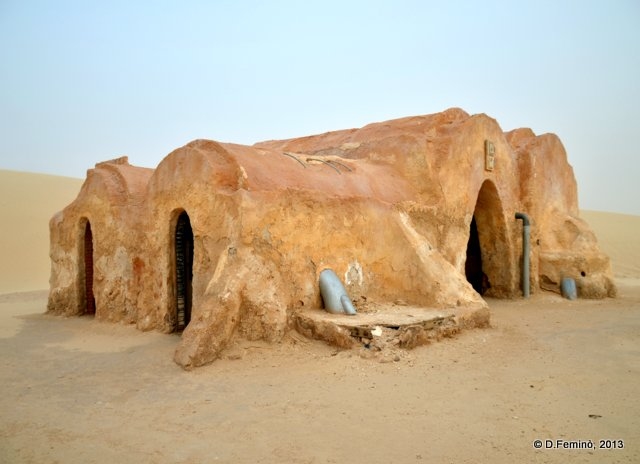 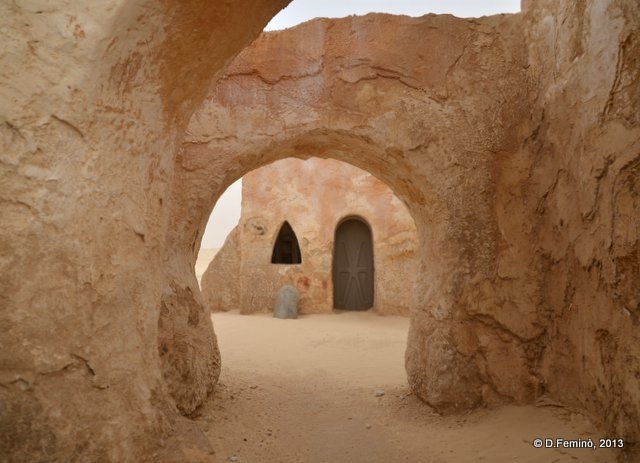 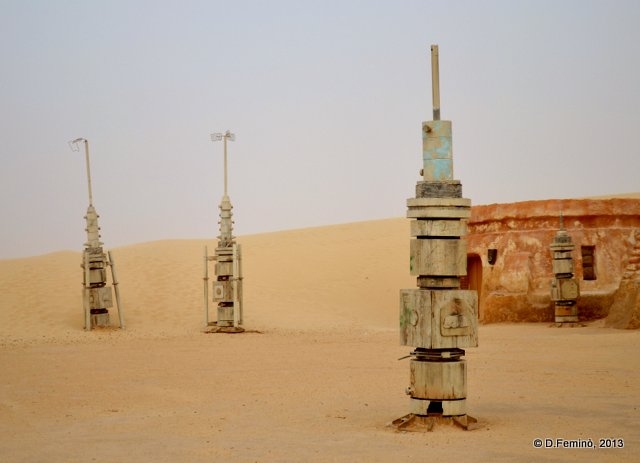 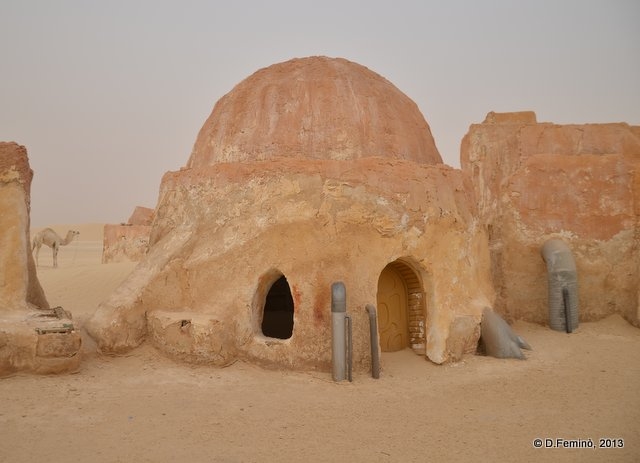 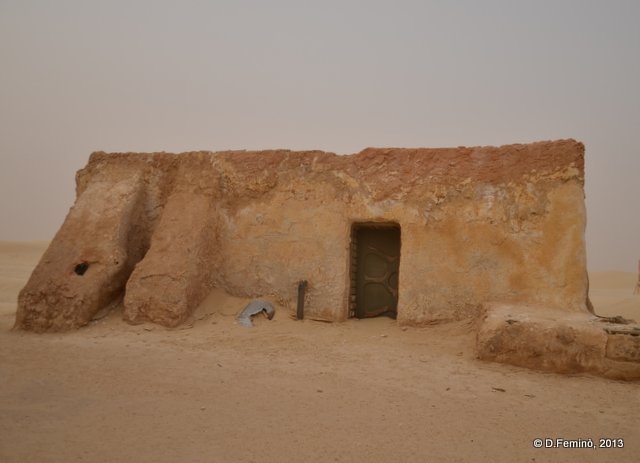 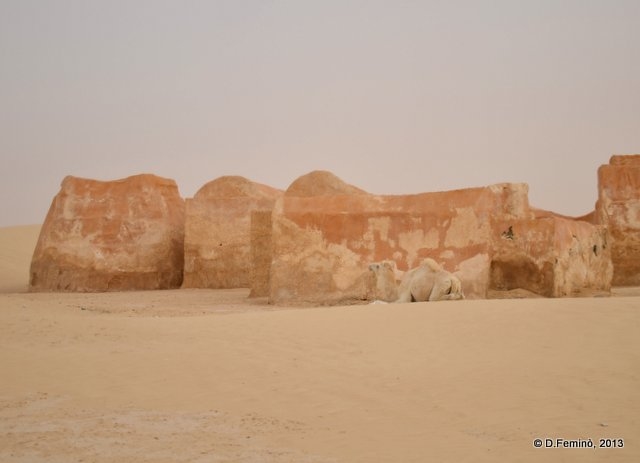 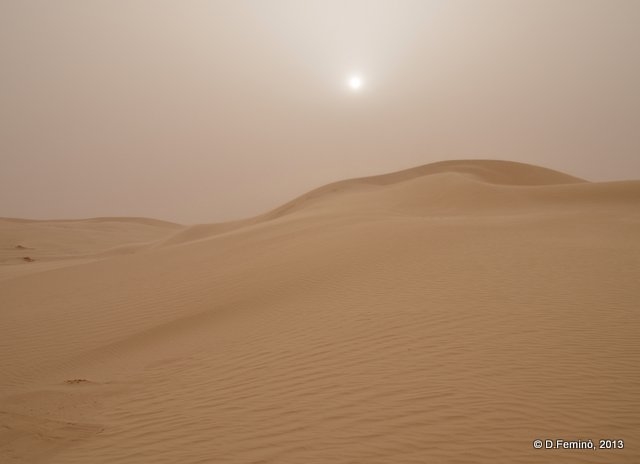 Qobustan mud volcanos
An adventure in the Jesuit Missions