This is my third full day in Xi’An. Such a long stay is not so common during my trip. At the end of this, when the circle I’m drawing around the world will be completed, I’m sure there will be not so many places ahead Xi’An in this ranking and I can also tell you for sure, that I will regret I’ve spent here only three days. If I’m doing this introduction is because yesterday I was reviewing the list of places to see and I realised that surely I have to keep something important out of my list. After bell and drum towers, terracotta army, today I’ve decided to spend my time mostly visiting two wild goose pagodas the small and the giant one.

The first pagoda I’m going to visit is the small one because is closer to my flat. The first question that it came to my mind was why “goose”? So, I found this info on some Chinese source. 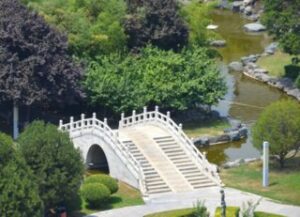 It is all based on a legend. 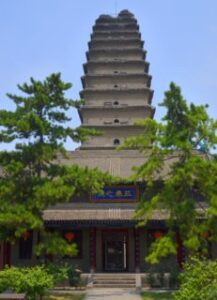 We know that nowadays most of Buddhists are vegetarian but it seems that at that time, during 7th century, for some of them, eating meat was normal. A group of non-vegetarian was praying Buddha to have some meat to eat for the day and something happened. A wild goose (…) broke its wings and crashed exactly in front of the monks. 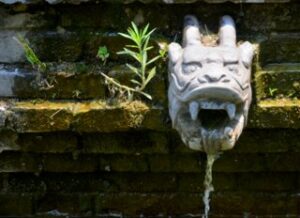 The story doesn’t end with a juicy roast. The monks got this event as a sign of the will of Buddha being more friendly to the animals or maybe they were just impressed by the sad death of the poor bird. The conclusion is that also those “heretics” became vegetarian and, what it is more interesting for us, they decided to build a temple here. Now… I know… 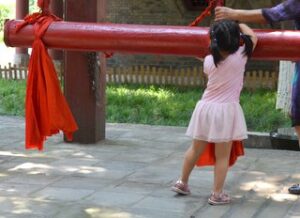 As I said already, there are two goose pagodas in Xi’An. I don’t know if this legend applies to both temples and, in this case, what was happening to geese while they were flying over Xi’An in middle ages but now is time to tell you about my visit. 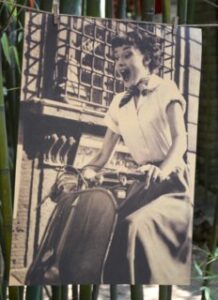 The pagoda is located in a very pleasant area, quiet, full of greenery and water. Originally the building hosted the texts and images of Buddha that were brought from India. It had several problem during its life. Due to an earthquake is now lower than a couple of floors but it still impressive with its 43 meters height even if the damage on the top of the pagoda is still visible. One of the biggest attraction of the area is the huge bell that can be tolled with a big red trunk. The vibrations made by the bell’s sound create small waves in a basin. You can see better the process in the short video at the end of this chapter.
Continuing to walk around the pagoda I came across something quite unexpected in a buddhist temple: a couple of beautiful pictures of Audrey Hepburn, including one taken from the movie Roman Holiday with the actress driving a Vespa. No idea why…
Now, it’s time to leave, there is still more to see in Xi’An…