Yesterday I tried to get acquainted with this new big town but I felt a bit tired and, knowing to have a couple of days to spend here, 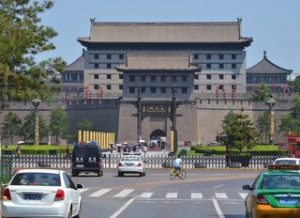 I decided not to go to any specific sight and just wandering around. This kind of rest gave me the proper energy to face this day that is going to be tough and full of things to see and do. I’m going to tell you about it with the help of a lot of photos, music and videos. 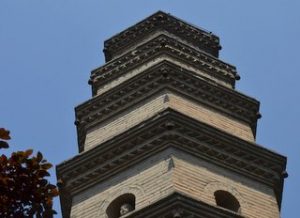 My apartment is very well located, not far from the southern gate and the line 2 of the metro that is probably the most useful for tourists since it runs north-south connecting the railway station and the bell tower. Being in an apartment I don’t have breakfast so the first goal is to drink some coffee and eat something. I immediately realize that food is great in Xi’An and also bakeries that so far didn’t impressed so much, are great here. Cookies and some fruit will boost my day. 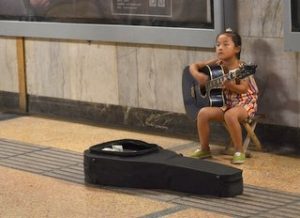 My first goal is to reach the walls and afterward the two towers (bell and drum) to visit maybe both today, let’s see. 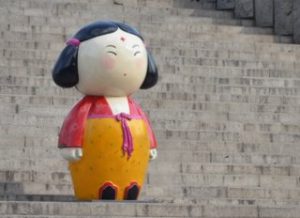 I can’t say that walking along this busy big road is particularly pleasant but luckily the path to the walls is not so long. Immediately I see a small pagoda. In Xi’An there are many. This is a minor one.
In the area there is a metro station and underpass where there is a small girl playing a guitar much bigger than her. Of course I agree she should stay with her mates playing, or at school, or with her family and not doing the busker in the metro but however I think she’s good at playing and singing and you can see her video here below. On the other side of the underpass there is a mall with big plastic figures on the stairs. My favourite is the one in the picture on the right.

I decide first of all to visit the Drum Tower that is few hundreds meters far from the Bell Tower that owns a central position in the middle of busy roundabout 🤦🏻‍♂️ !
Before telling you about the visit, few notes about this tower and the role of the drums. 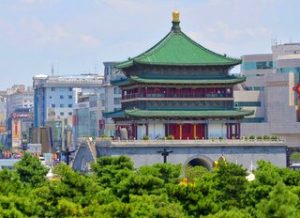 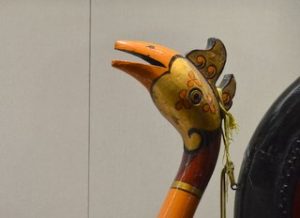 Drum towers (and Bell towers) were present in most important Chinese cities. The one in Xi’An was built in 1380. If the bell was struck during the day, the watchmen had the duty to strike drums after the sunset. In particular here, the sound of the drums could be heard three times during the night, first time after the sunset marking also the closing of the city’s gates, second time was around midnight reminding the population that was safer to stay home 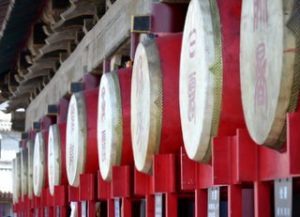 and the third time around 5 o’clock to announce re-opening of the gates. 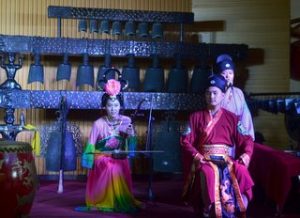 The tower is an interesting place for the beautiful view on the town, the other tower and the food market, I will tell you about later. There is also something to see in the tower, mainly drums, of course but also interesting wooden items like the nice goose head in the picture above on the right. However, beside the view, the best reason to come here is to assist to traditional music show that is held more or less every hour. I made a video, unfortunately with some technical problem, but I hope it would give you a good idea about it.