Today I’m going to visit Yungang grottoes, one of the most famous attractions in China. The site is located not far from a town called Datong. 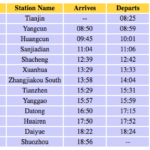 Every time the topic is building carved out in rocks, as temples of Petra in Jordan or Fethiye in Turkey or big statues like those I will see today, it is hard for me not to think of Indiana Jones movies, so iconic it was “Last Crusade” episode of the saga (partially shot in Petra). So, this kind of Indiana Jones writing this blog wrote his latest post in Tianjin and now is in Datong so, I think I should tell you something more. Yesterday was actually first day in my trip in which I didn’t take any photos. The trip from Tianjin to Datong was incredibly long especially if compared to the previous one. No fast train this time and the ordinary ones are actually quite slow. Differences between two trains are not limited to speed.

The train is constantly crossed by people selling food, such as fresh fruit and other typical Chinese stuff but there are also strange characters selling weird items that they present histrionically standing in the center of the car. The funniest object is an automatic bright fish walking on the ground (who doesn’t need at least one…). The most sold item instead is a razor featuring a torch and I’m wondering when it could be useful. There are no loudspeakers in the car so, whenever we approach a station, one of the controllers runs along all the train shouting the name of next town. I’ve left Tianjin yesterday morning at 8:25 AM and I had to wait until 5:30 PM to finally hear the name of Datong. Nine hours for less than 500 km. You can see the full path of the train in the little frame in the page. My hotel is close to the station but however the heavy rain I’ve found in town prevented me to go further around. I just went to eat something in a local fast food chain called Mr.Lee, whose logo resembles that of KFC.


How to reach Yungang grottoes.

This morning I left my hotel quite early to reach the caves. I hope I will have also some time to visit the town later. I have no idea of what to see here. Yesterday I had the chance to ask in a the regional tourist office in the station square how to reach to the caves. I learned that there are several buses going there.

Best one is the direct bus #603 leaving from the railway station square. It is quite frequent so I don’t have to wait so long. On the way I see crenellated towers and walls from the bus window. The weird thing is that everything looks to be new or under construction. It is not a restoration work. Are they really building a new walled town in 2017? It would be crazy. I need to check this later… Bus takes about 40 minutes to reach the caves site. I could have also taken a taxi for about 50 yuan (6 Euro) but a bus for 3 yuan looks much better to me. On the bus I meet a couple of french tourists and chatting with them makes the time flowing away faster. The entrance to the site is close to the bus stop. Ticket is relatively expensive for Chinese standards: 125 Yuan but I soon realise that it’s really worth it.
This post continues to next page