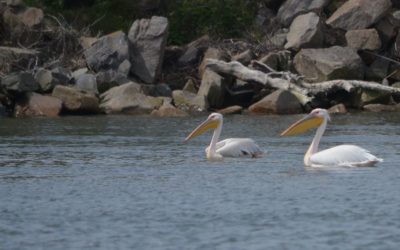 Another tough day, spent mainly travelling. My destination today is Sulina, the easternmost town in Romania, very close to Ukraine border and in the middle of Danube delta area.

To reach it you need to go first to Tulcea (pronounced Toolcha) by bus and then take a boat. The official ferry leaves at 13:30 so I have time but I prefer not to arrive in Tulcea at very last moment so I take a bus from Constanța at 9:30 considering that trip lasts roughly two hours. Bus leaves from a station in the Tomis III quarter, in the north part of the town.

I take a taxi to go there. The mini van is pretty comfortable and has a luggage trailer. After two days of clouds today seems much better. From the window I see beautiful yellow fields and white clouds on a blue sky. This great view reminds me of the great landscape seen in the movie “Everything Is Illuminated” taken from the book of Jonathan Safran Foer. We are not in Ukraine like in the movie but actually we are not far from it. The main difference are the wind farm spotting some time the view. Trip goes on smoothly and after little less than two hours we arrive in Tulcea.

A break in Tulcea.

I have about two hours to spend in Tulcea so in the beginning I think of doing some walk around to see the city but it doesn’t inspire me that much. So, after buying the ticket for the boat, I go to check if there is a reasonable way to reach Bucharest by train.

All the stations: Bus, Train and Sea are close each other, one after the other. Train station, apart a nice old locomotive parked outside is totally useless. Trains to Bucharest are not direct, take an incredibly long time to reach destination and in any case are not compatible with the schedule of the ferry I will take after tomorrow. Ok, I decide that, since the trip by boat is going to be quite long, about 4 hours, is better to have a proper lunch. Next to the berth there is a small restaurant called Skorpion. It has a nice old fashioned atmosphere and they serve fish. I get a grilled catfish, simple and tasty. Now I’m ready to board for my second cruise on a river of my life.

Sliding on the Danube.

Before this one to Sulina I took a ferry on a river only in another occasion. It was three or four years ago, moving from Phnom Penh to Siem Reap, in Cambodia.

It was an exiting trip for two hours and then it was an extreme boredom when we were in the middle of a lake for hours.

Here of course the landscape is going to be completely different. The boat is relatively small. Several hundred people are sitting inside and there is a small chance to stay outside. I find the only small corner where this is possible but of course it is also the smokers’ favourite place. Artificial channels on the delta area are mainly three. The one going to Sulina is the shortest with a length of 64 kilometres of which last 10 are an extension protecting the path from Sulina to the Black Sea. The channel was built in second half of past century. During the trip I see a lot of small boats, some fast used for transporting passengers and some slow, mainly used by fishermen. There are also big ship, most of them from Turkey, because the channel is large and clearly also deep enough. After the thrill of the beginning I’m starting to be a bit sleepy and then I move inside.

The ferry does several stops in the villages along the channel. The biggest seems to be Crişan. I have the impression that in this part of the channel there is an higher amount of birds. I see some small gull, storks in their nest, duck and cormorants.

The boat is a fast one but in the end for most of the time is going pretty slow. I don’t know what kind of constraint it has but every time it accelerates, is slows down after few minutes. By the riverside there are fields and small herds of cow or, sometime, a horse. The more we are going close to our destination we are entering into the area inhabited by Lipovans a population of Russian origin that is present here and in Bessarabia. Finally after exactly four hours of trip we approach Sulina harbour. I look around and I say to myself: welcome at the end of the world.

Getting acquainted with Sulina.

It is quite hard to get lost in Sulina. The village has a grid structure with four or five streets running along the channel and some other ones intersecting them.

On the other side of the channel there is the base of the Coast Guard and the Border Police and some other house. The few shops, café and restaurants are located in the street #1, the one facing the channel. However there’s not plenty of places. The few sights are some church and an old lighthouse. That’s it. I’m almost worried for the dinner. It seems that I am one of the very few tourist in town, maybe the only one. What the town doesn’t lack of is for sure dogs.

There are more dogs than tourists but also dogs vs. people is an equal fight. They don’t look aggressive at all but I would not like to meet them in the night. You don’t come here to visit the town but for the visit of the delta and I will do that tomorrow. The tour of Sulina last maybe 30 minutes. After it and a bit of rest I get out to dine in number one restaurant according Trip Advisor and even if the carp with onion and polenta is not bad I cannot say I’m satisfied. Coming back home I found another place, unpretentious but maybe better. Let’s see tomorrow.
Here following Sulina and Danube Delta gallery. 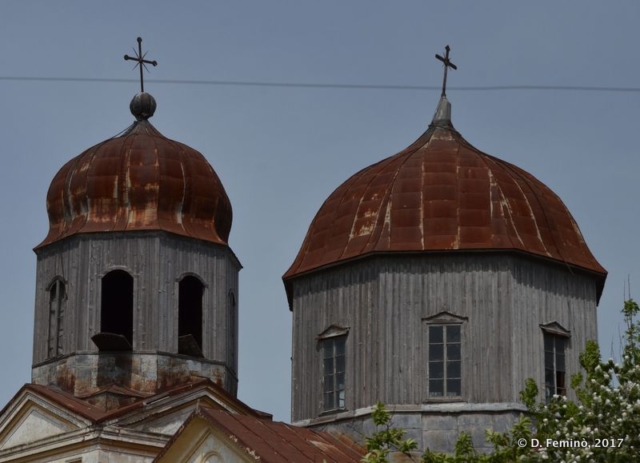 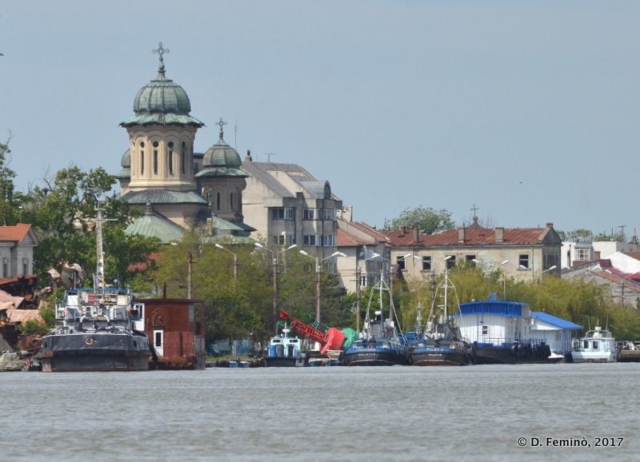 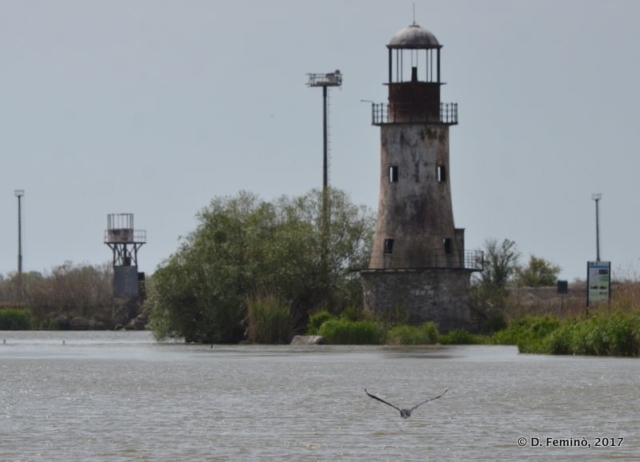 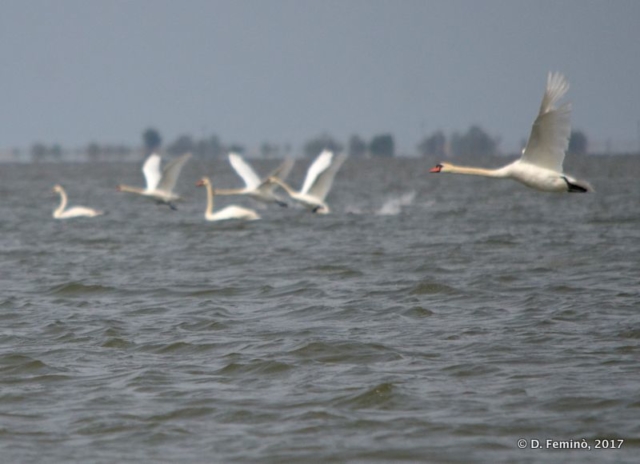 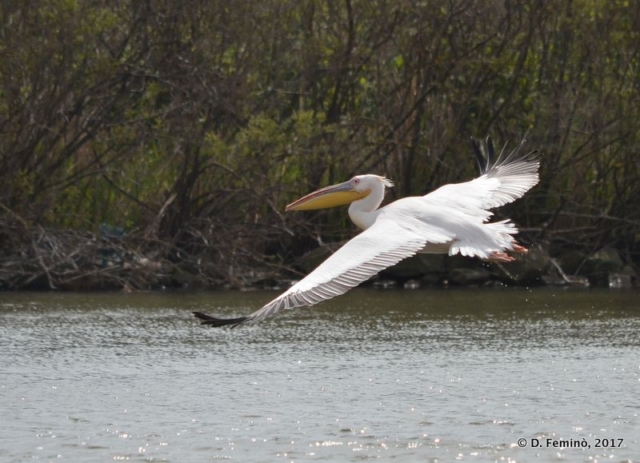 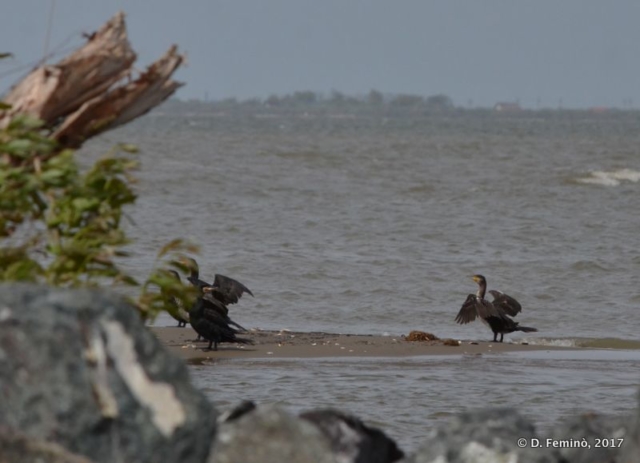 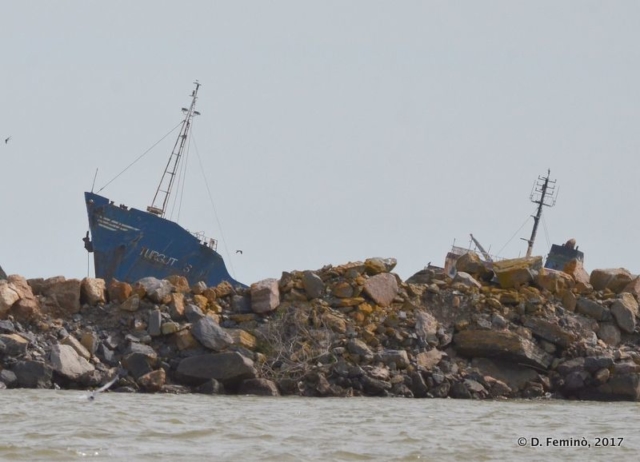 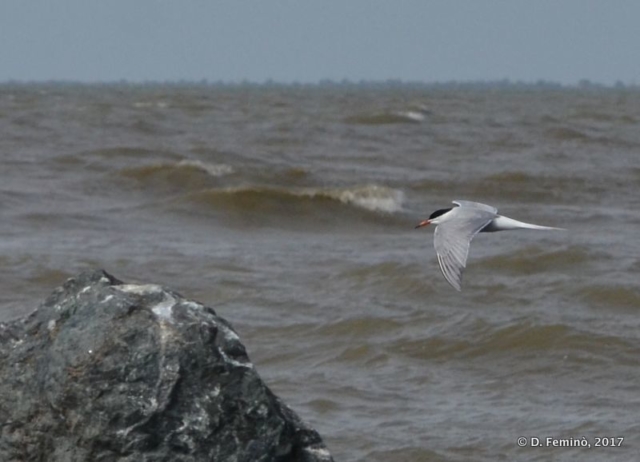 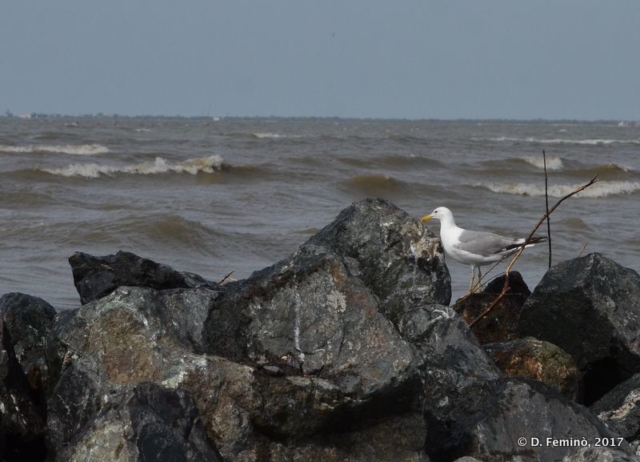 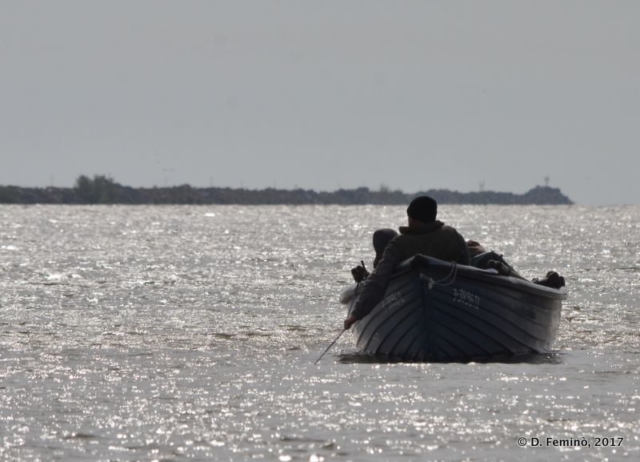 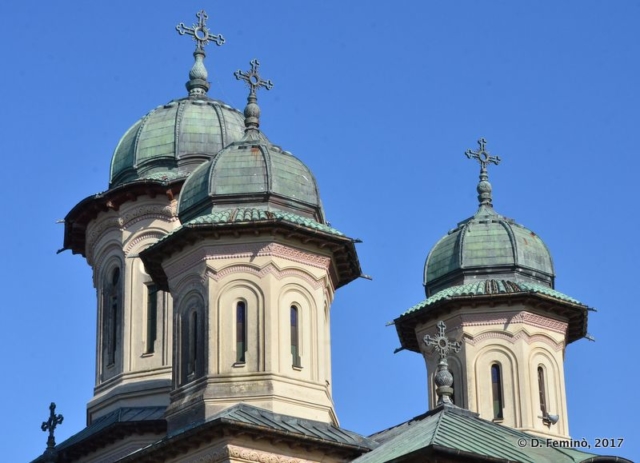 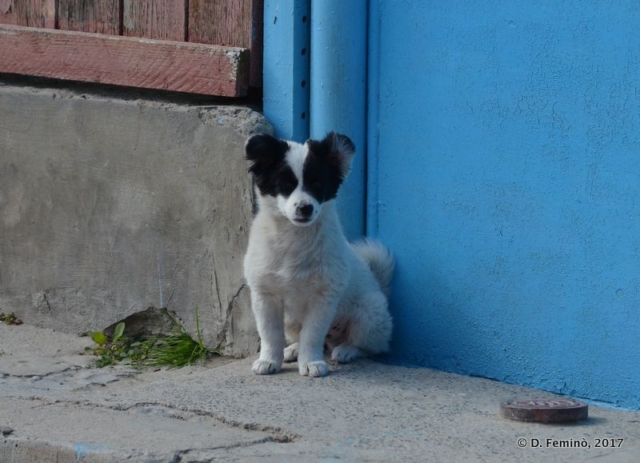 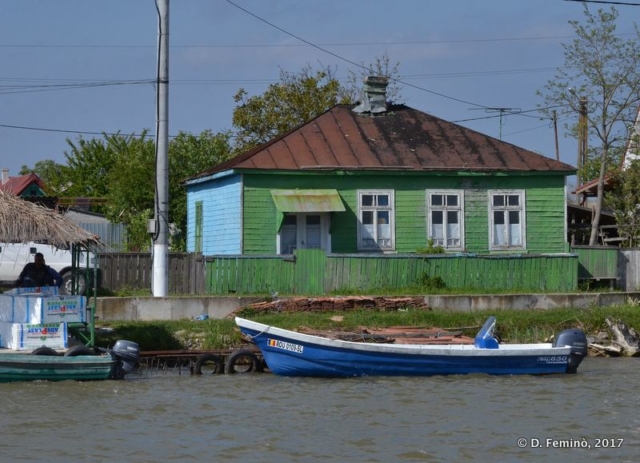 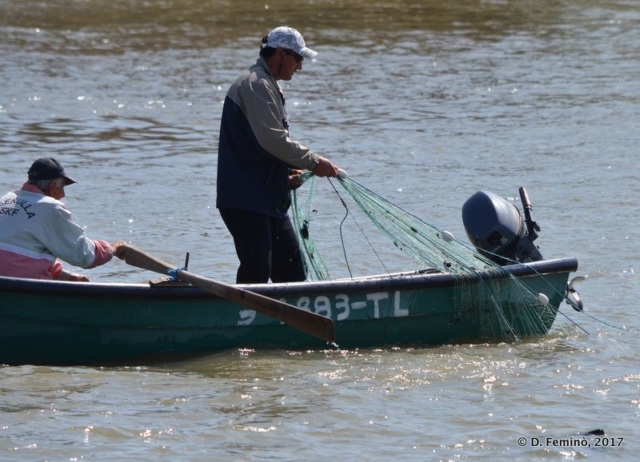 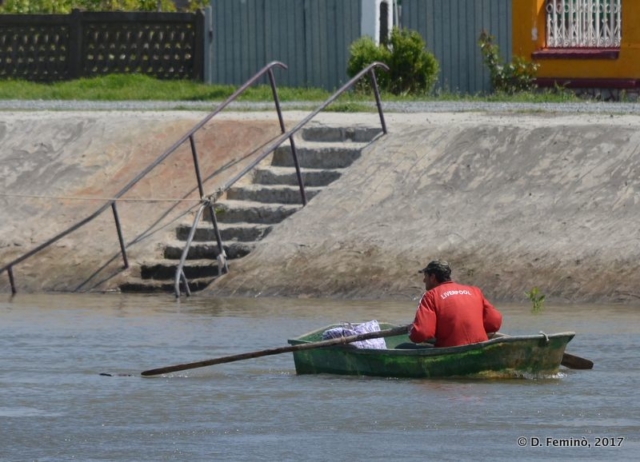 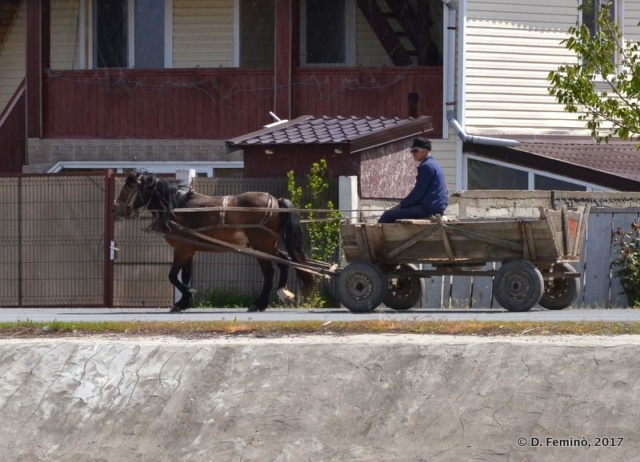 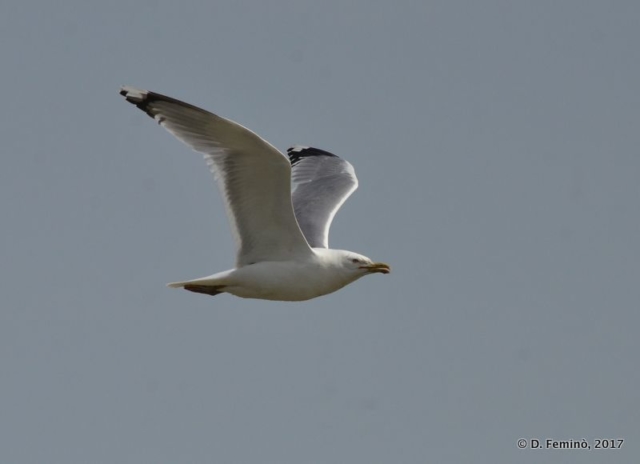 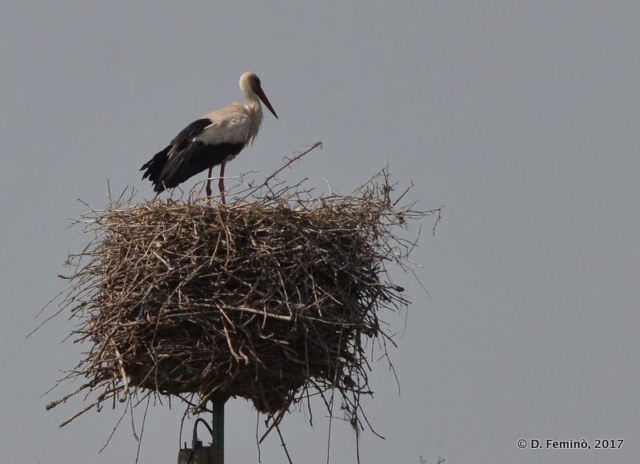