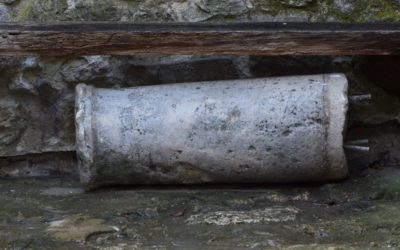 When I wake up I see that unfortunately also today sun is busy somewhere else. It is a pity because I think that Varna is a great city and with sun shining it would be great to go around among those beautiful buildings, through its parks and along the sea. However, at least is not raining but is clearly not the same. I can wait that weather maybe improves because before I have to manage an important issue about tomorrow trip to Romania.

I took it for granted that two important towns such as Varna and Constanța, relatively close, would have plenty of connections but instead what I saw on internet didn’t confirm my assumption. It looks like direct buses are not scheduled on daily basis and connection by train doesn’t exist at all. I asked also support from the girl at the reception that by the way speaks Spanish, so it is easy to communicate with her and she also suggested to check at the main bus station. And this is what I’m doing now. Information office is closed for a short break so I start to check with all bus companies managing international connections to Romania and most of them do not serve Constanța but one that does it as part of a connection to Odessa in Ukraine running every second day and tomorrow is the wrong day. Unfortunately this is also confirmed by the information office. Apparently there is no way but I still feel optimistic. In the end we are talking of a distance of about 150 kilometres. I’m sure there would be a way. I will think about it later now I have something else to do.

Next to the bus station there is a big mall, similar to many other ones around Europe. This are a perfect expression of the non-place defined by the 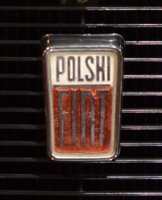 However this one has a peculiarity making it different than any one else. Beside the usual bowling, cinema, food hall and supermarket, this mall also hosts a museum of objects from Communist time, from 1944 until 1989. This sight since is very likely a private one is not mentioned in any of the official documentation provided by tourist office. I discovered its existence by a simple stamp “Retro Museum” I’ve seen in a street and then searching on Internet.

Ticket price is above the Bulgarian average since it costs 10 Lev, about 5 Euros but I think it is worth it. The museum is located in a huge hall at first floor of the mall and among the objects there are an incredible collection of cars all in perfect condition.

I noticed some that was clearly based on some Fiat model since at that time Fiat had several partnerships in Eastern Europe but my favourite ones are two Russian models: the magnificent Volga, the black car of the communist leaders and, at the antipodes the basic Lada 4×4 that I had the chance to drive in Armenia. Great car when you have to go uphill or to overtake some obstacle. I found it a little dangerous on downhill but maybe was that particular one I was driving. Next to cars there are often wax statues of communist

leaders and also some Bulgarian artist of that age.

Everything is very well set up with electronic panels with text in four languages. Beside the cars that of course take most of the hall space, there are dozens of displays containing small objects and this is also very interesting. There are toys, cameras, packets of cigarettes, computers. Objects from real life. The visit takes about one hour and I really enjoy it. A perfect way to spend time when the weather is bad.

Bus Station and Mall are located quite far from the seaside while is concentrated the most of the historical buildings and all the other attractions so, I head in that direction.

Weather, if possible worsen and I would not be surprised if it starts to rain. Unfortunately it does while I’m entering into my second sight of the day: Sea Garden or, as it is called locally, Primorski Park.

I forgot to bring with me any raincoat but I don’t want to come back to the hotel so I face the rain, not that strong actually, and I go on into this beautiful park stretching for 8 kilometres along the sea. Even if is a working day there is quite a lot of people walking along the aisles full of flowers and statues. The park contains several attractions and as Dolphinarium that unfortunately today is closed, a zoo and other similar things

but I really feel much better to enjoy the park especially now that rain, mercifully, stopped to fall. I decide to follow the inner part of the park in one direction and then to come back through the road that runs next to the beach. Here there is even a little waterfall with hot sulfur waters and people exploiting its thermal benefit in a pool. I keep on partially doing again the same path I did yesterday having a small detour to see some church and the pedestrian shopping street. I then go back to the hotel and again in the right moment I enter in the room, a shower starts to fall. Thanks rain!

Ok, now I still have something to do. How will I reach Constanța tomorrow? With a direct bus is impossible so I try to understand what is the village closest to the border that I can reach by bus. Bus station timetable in one page, google maps in the other one I’m able in the end to find that are frequent connections to Shabla, a small village 20 kilometres souther than the border. On Romanian side there is a town called Mangalia from where there are also frequent connections to Constanța. Problem will be to move from Shabla to Mangalia. I count on a taxi and with this wishful thinking I decide that my planning effort for today is done. I end the day dining in a quite old traditional restaurant, trying lamb cooked in Sač. Nice, I wouldn’t say no, but far from the perfection of that one of Restaurant Sač in Zemun, near the beloved Belgrade.
Before going to sleep, here, for your eyes only, Varna’s gallery. 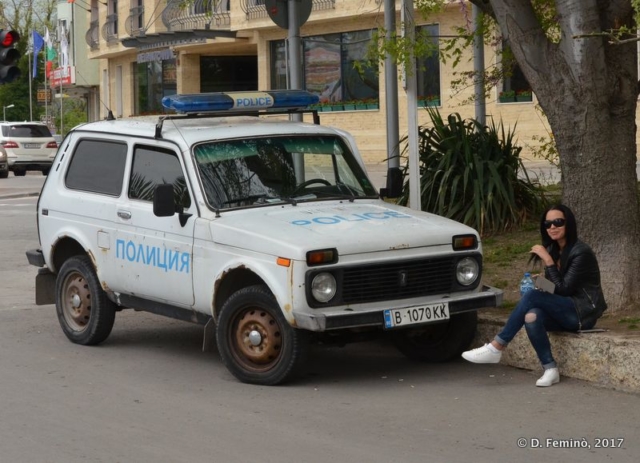 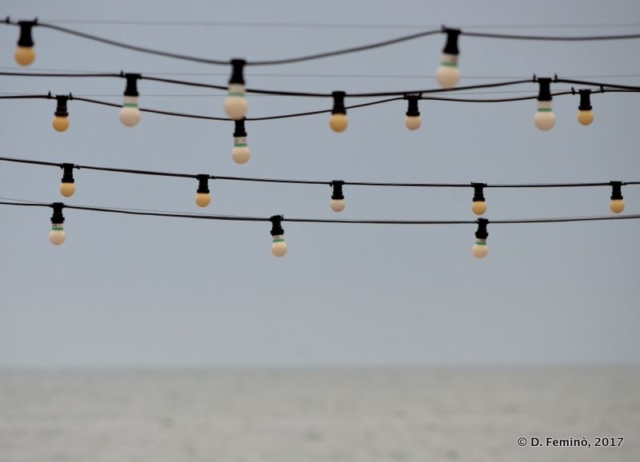 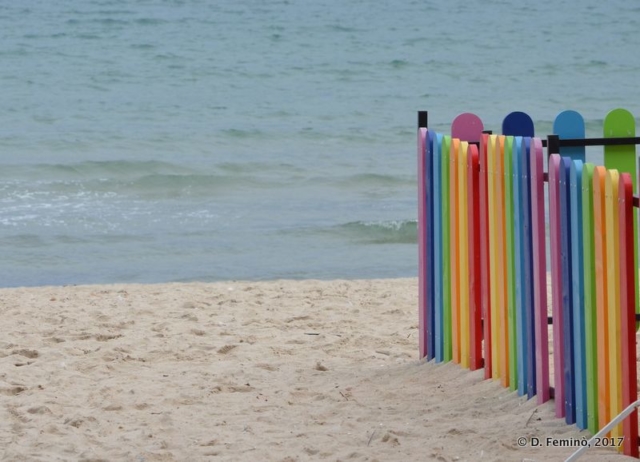 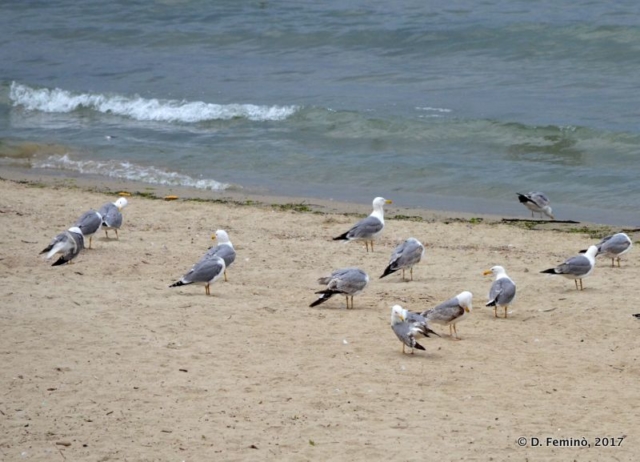 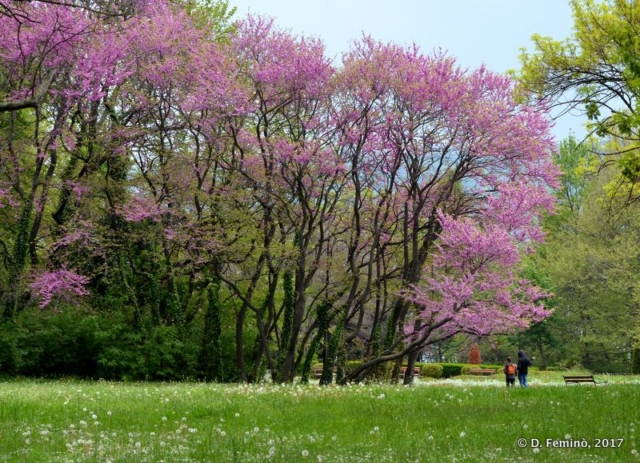 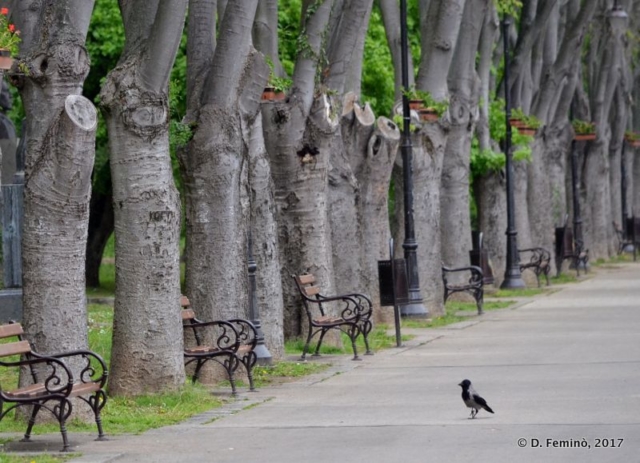 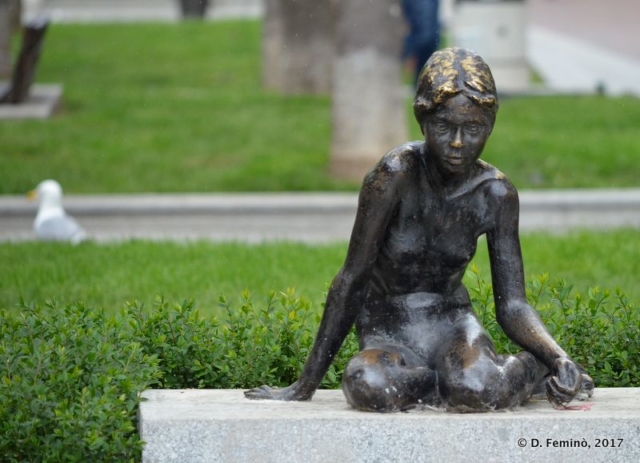 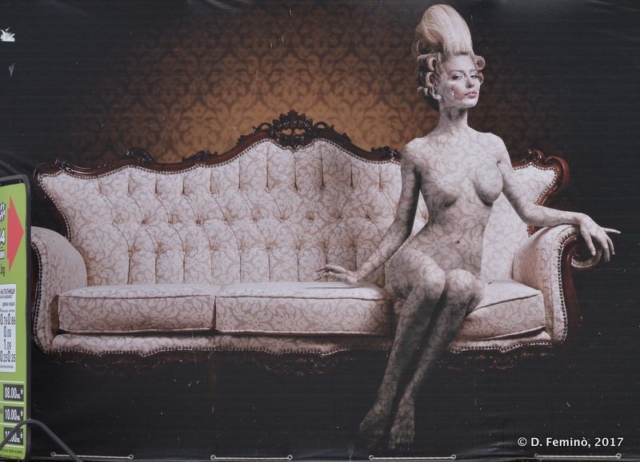 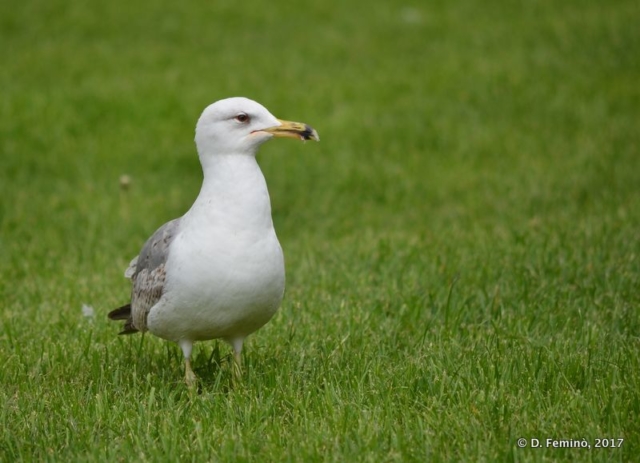 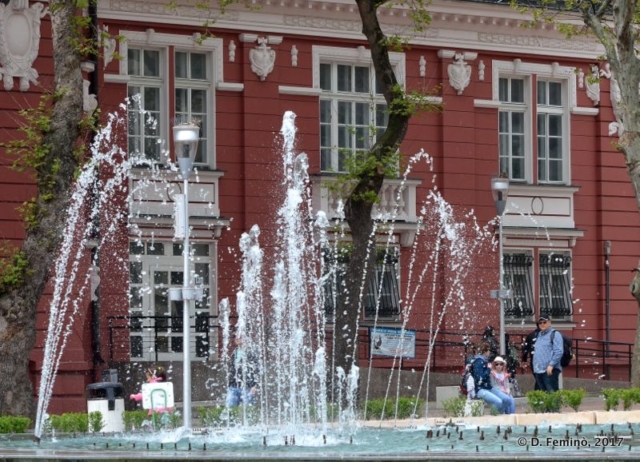 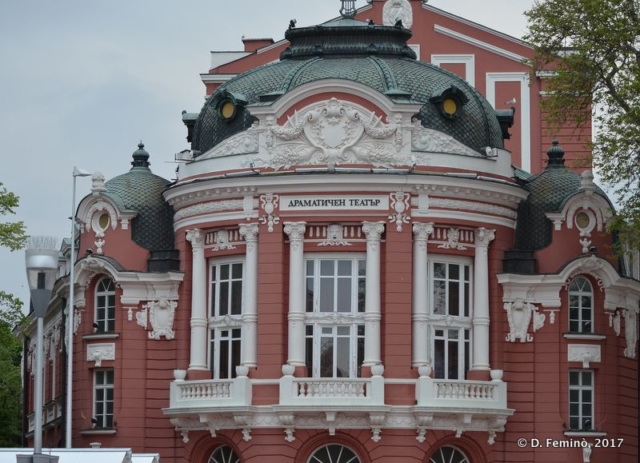 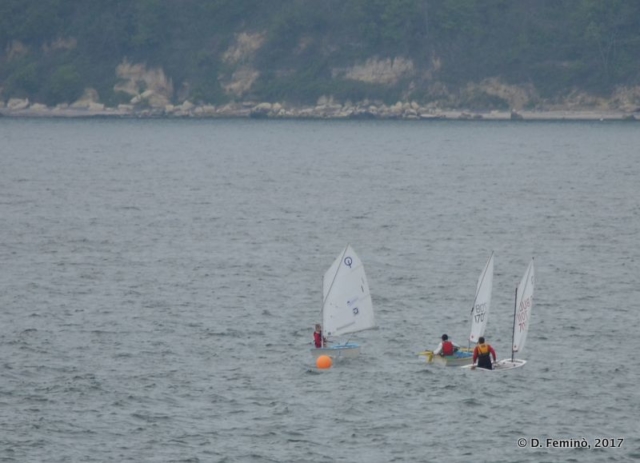 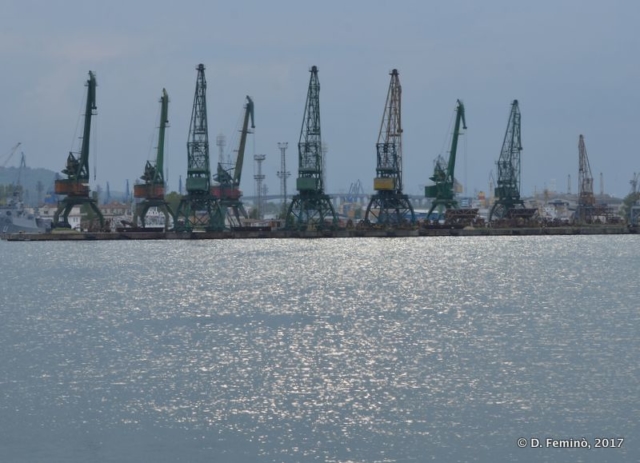 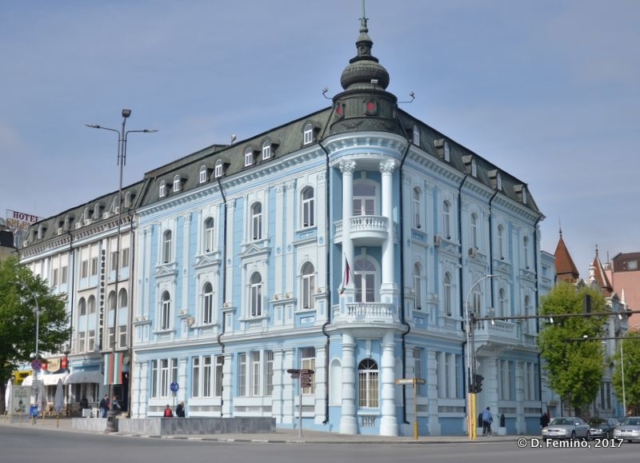 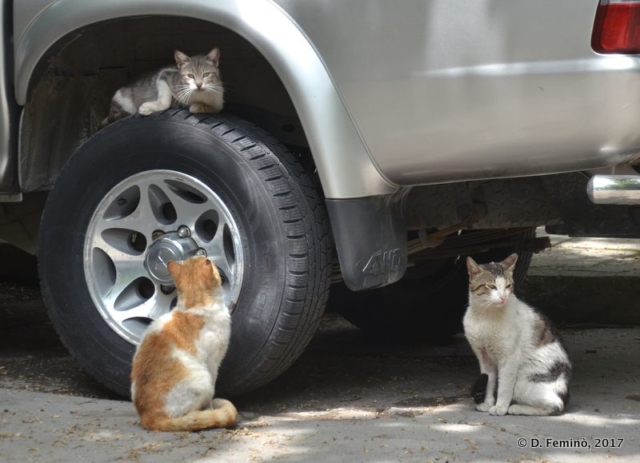 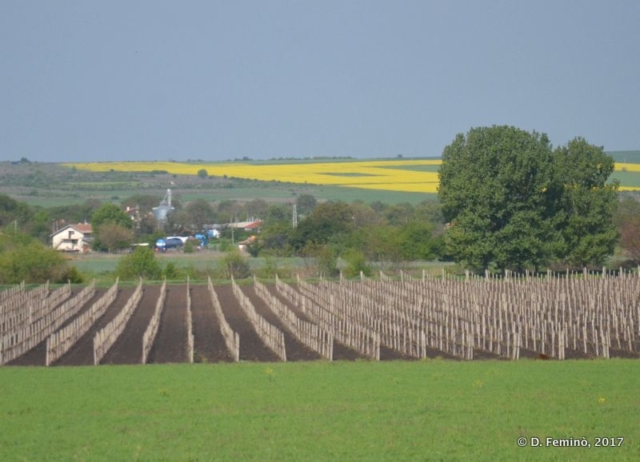