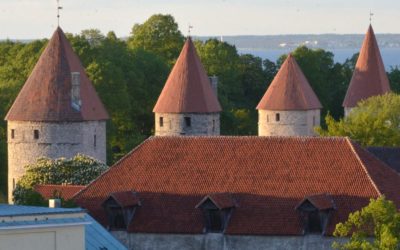 And the winner is…

Yesterday I said, in my daily post, that I didn’t have any idea about where to go today for an excursion. After dinner I checked on my guides and on other sources and in the end I opted for the archeological site of Apollonia. I’ve hopefully right understood that even if smaller and less rich than the most famous Butrint, it should be interesting.

The site is not so far from the town of Fier, a place that shouldn’t have anything to offer but I’m curious to see. How to get to Apollonia from Fier is yet unclear to me but for what it regards Fier I assume that there would be frequent connections to and from Berat from the bus station so, after the breakfast in the Bed and Breakfast I go to the main bus station thanks to the urban shuttle bus. Once there I see a mini van ready to leave to Fier. Is this the kind of mini bus that, sometime in horrible conditions, are called marshrutki in the former Soviet Union. Here, as far as I know they should be called “furgon” but I had the impression that drivers do not like that name anymore. This one is not bad and it leaves on time. Trip to Fier should last a little more than one hour. The road is quite bad in the second half of the trip and it is not even particularly remarkable for what it regard the view from the window except for a crazy building in shape of a ship. I guess it is a restaurant but I’m not completely sure.

Fier seems a very busy town. It makes perfectly sense that its name from the Italian word “fiera” that means trade fair in English. Bus has its final stop quite in the centre of the town for what I see. I have to say that I like the energy of this place.

And it is not bad. In less than one kilometre that I walk in the direction of Apollonia, looking for some bus, I see several interesting stuff maybe not beautiful but interesting and funny. Like, for example, the huge globe that can be found in the centre of a roundabout. Not far from it there is a small park with dozens of old men playing chess, cards, backgammon but especially dominoes. In this park there is also a bizarre fountain with dolphins and seals. In the back there is a mosque with quite strange minarets.

And the architectural oddities are not over. I can see the roof of a huge white building vaguely reminding of the white house. Is not on my way but I promise to my self that I will go to check what it is once I will be back from Apollonia. Yes, I should not forget my main destination. Problem is how to reach it. Of course I could take a taxi but is not what I want. I checked on the map that the archeological site is close to a village called Pojan but that also the bigger village of Dermenas is at a reasonable distance so I look for buses going to one of these two places or, of course, to Apollonia.
I’m quite lucky because going on I find what it is probably the local bus terminal and among the ones waiting there is one to Pojan. Bingo! It should be very close to the site.

Apollonia or welcome to Arcadia.

Pojan is very small and doesn’t seem to get huge benefit from the close archeological site. I didn’t see neither restaurants or signs for rooms. And Apollonia is really a stone’s throw away from here, so I immediately go in its direction.

At a certain moment, just behind a curve, I’m in another world. The landscape around me is fantastic and in line with was my idea of Arcadia when I learn about it at the school. Shepherds with their flock of sheep spread over green hills, one little stream and the biggest amount of geese I’ve ever saw in my life, often with newborn little chicks. Walking in this beautiful scenery is easy and I arrive at the entrance of the site without effort.

I see a map and I try to imagine a possible itinerary within the area that seems so me wide enough. For the first part I walk on nice paths but without any evidence of ruins. This is partially due to a mistake I do at a crossroad but also because I’m taking the longer path to the ruins, basically going all around the hill before reaching the most dense part of remains. While I’m trying to reach the ruins, I can tell you something about this place. Apollonia was an ancient greek town founded by colonist coming likely from the island of Corfu during 6th century BC. Its better period was during the Roman domination when it was an important harbour and it was also on the route of the via Egnatia that as you should know from my post published two days ago, started in Durrës.

Unfortunately the success time had a sudden end in 3rd Century AD when, due to an earthquake, the harbour silted up. Meanwhile I finally reached the most interesting part of the site as I can see from the fact that finally I see group of tourists and, after them, also ruins. As always in this kind of sites, there is some area with basement of the houses but, unless there are mosaics, and this is not the case, there’s nothing to see for non archeologists.

But at least in this case the landscape helps a lot.
However, now I’m in the core of the site. The heart of the ancient greek towns was the “agora” and in roman time, the “forum”. This is exactly what I finally find. Here there is a small theatre, a gymnasium and some column as remain of a porch.

Best preserved ruins of the site are here and, by the way, this part of the site is very close to the main entrance but in the end I’m happy that I took the long way to reach it. However, non that I did it I still have to see the monastery area where it sits the Church of Saint Mary with some nice fresco and the museum of Apollonia. The most important work that can be found in the museum is a shield with the head of medusa in the centre but I didn’t take a picture of it to avoid you to be turned to stone… 🙂

Back to Fier and then to Berat.

Now it’s time to get back to Fier. When I reached the site, I’m pretty sure I saw some minibus waiting to leave to Fier but now I don’t see any of them so, I’m ready to reach the main road, 6 kilometres far, in the unlucky event that I don’t find a bus even in Pojan.

But I’m very lucky because, I get a ride from an Italian couple from Udine part of a wider groups of former member of Italian Alpine troops, here to commemorate the fallen of Balkan campaign during WWII. Once in Fier I have a mission: discovering what is the “white house” and I accomplish my goal. The building is the seat of the local University. I guess that at the moment there are no lessons because I don’t see any student but all around there are restaurant for them. Bus to Berat has to be taken a bit far from the centre but on the way I have the chance to eat a byrek. In Berat, in the evening I dine in Gorica and then I go to sleep quite early. Tomorrow I have a bus to Sarandë leaving at 8:00 AM.
Here following, as usual, you can find my gallery with pictures of these 2 days in Berat, Apollonia and Fier. 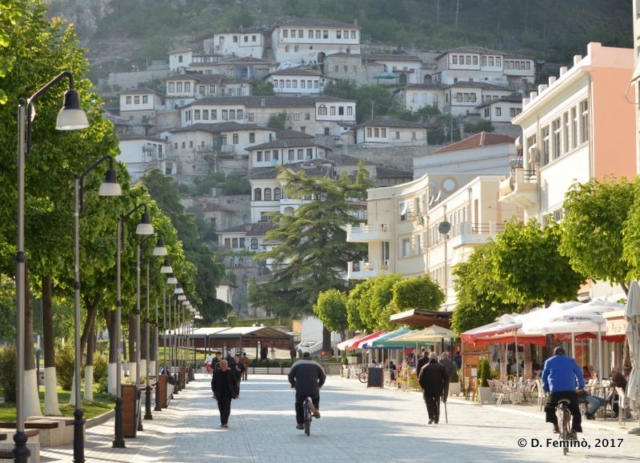 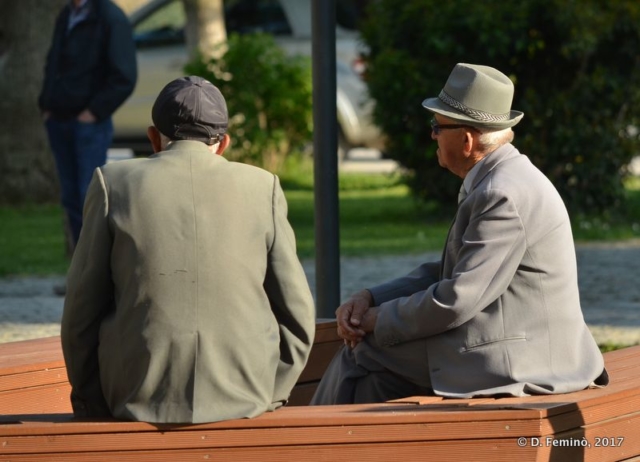 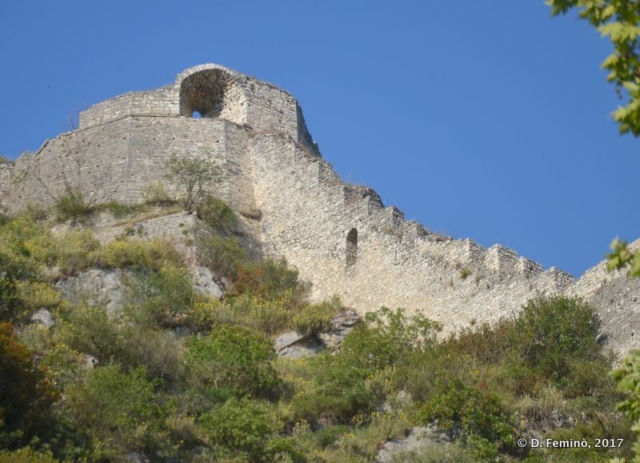 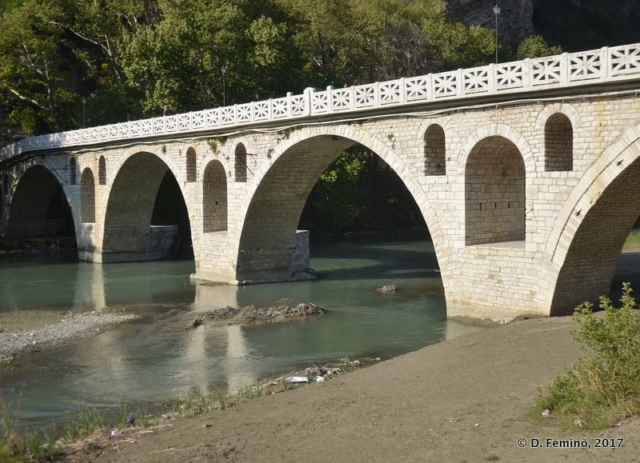 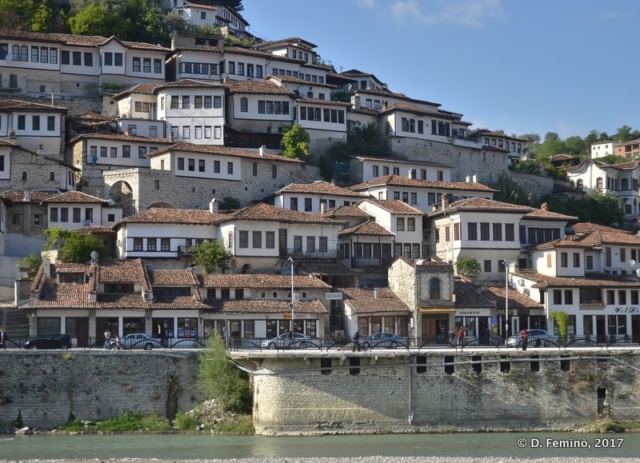 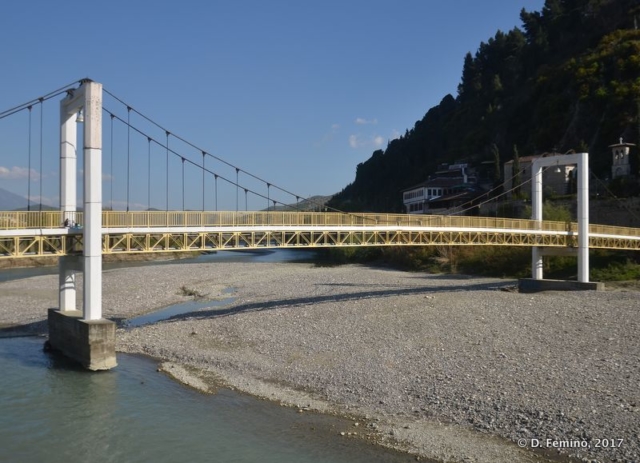 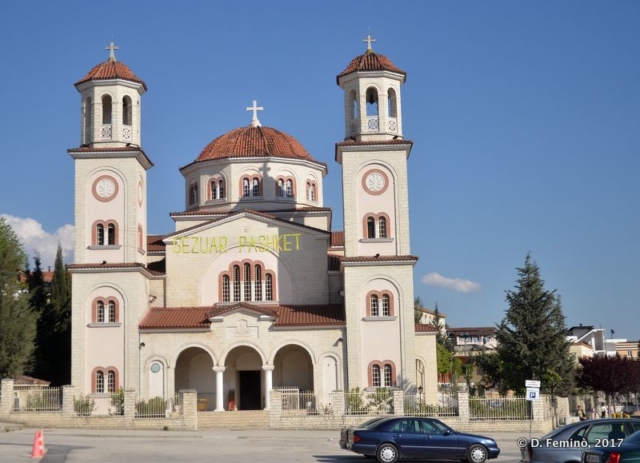 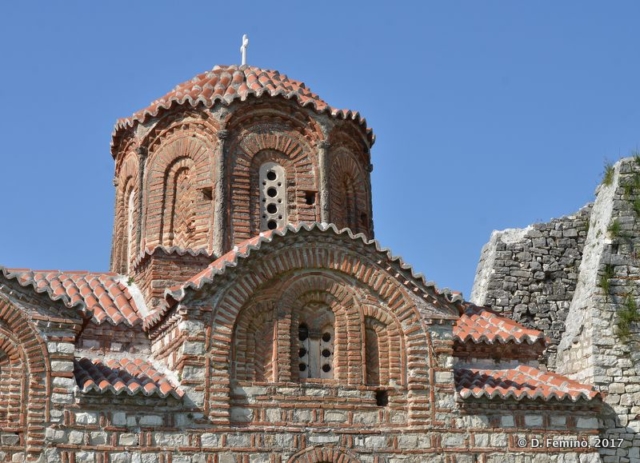 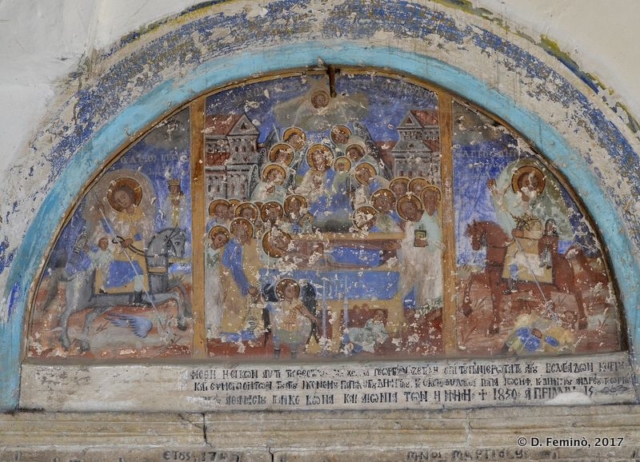 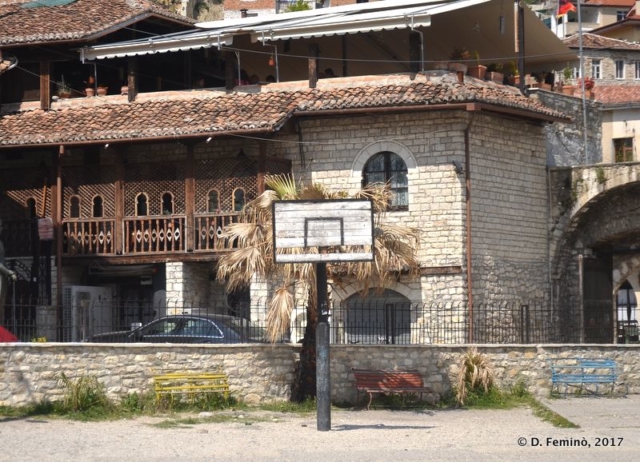 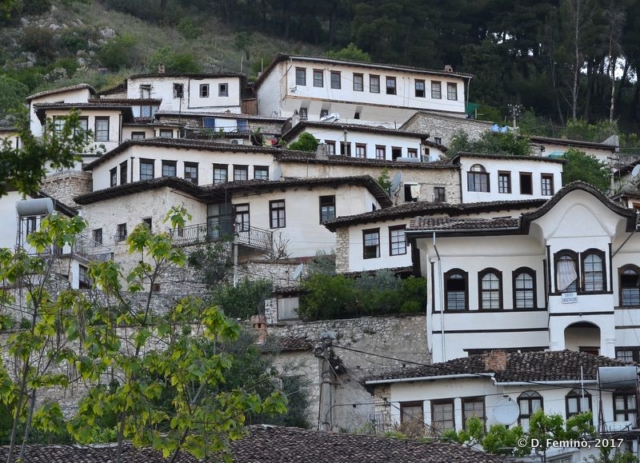 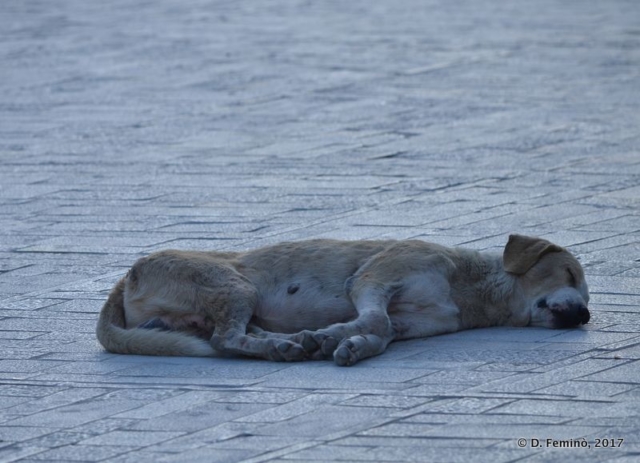 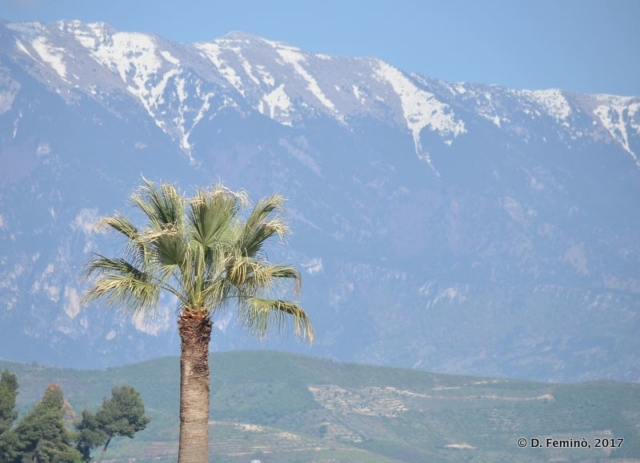 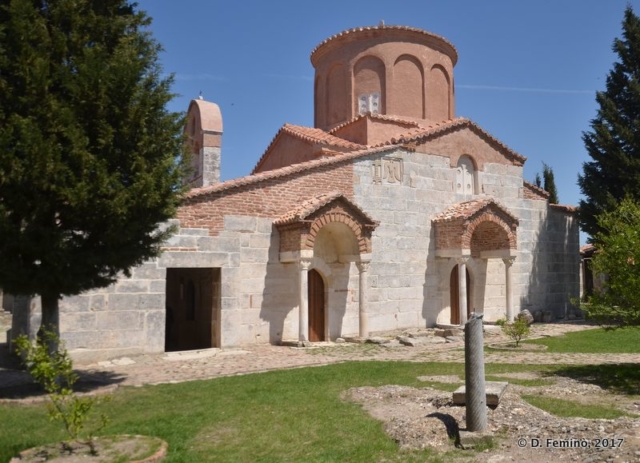 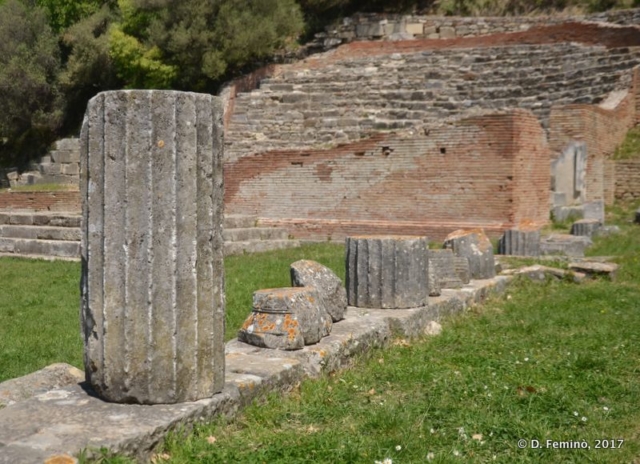 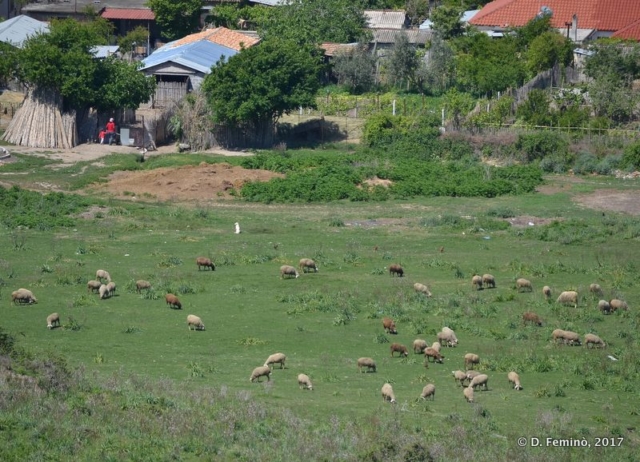 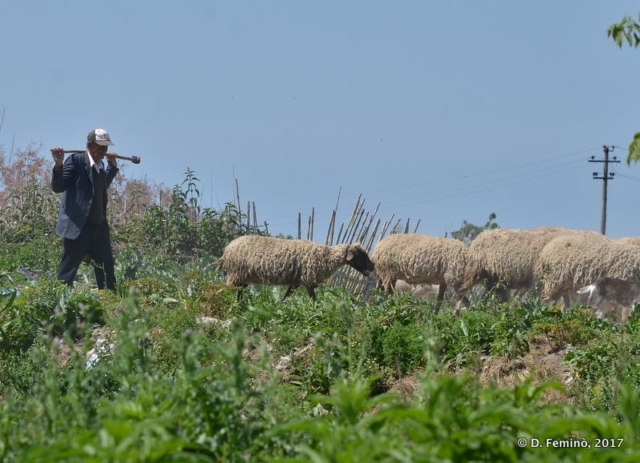 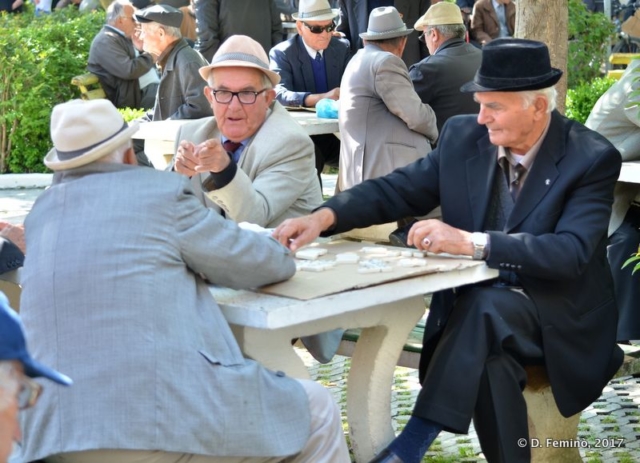 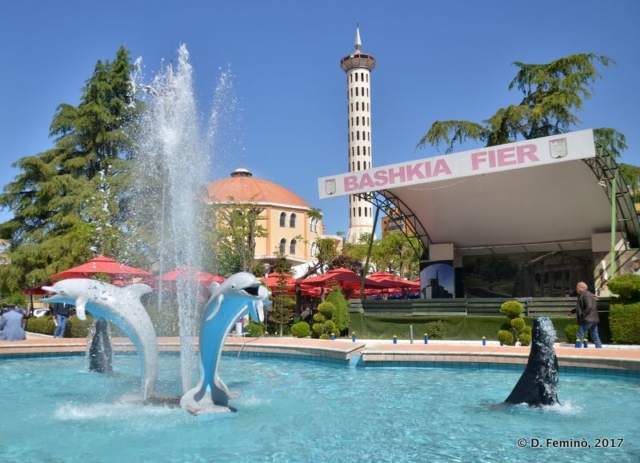 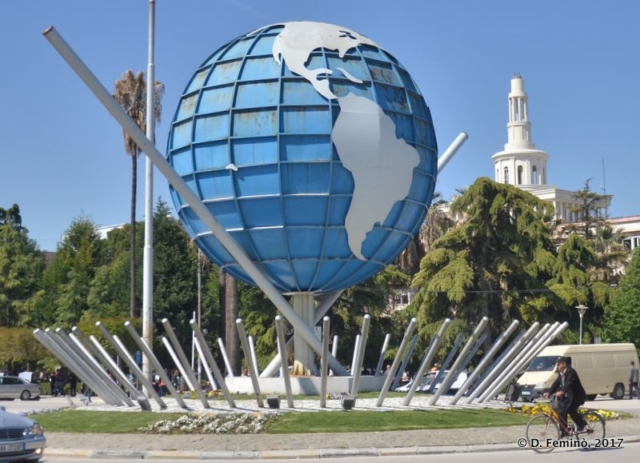